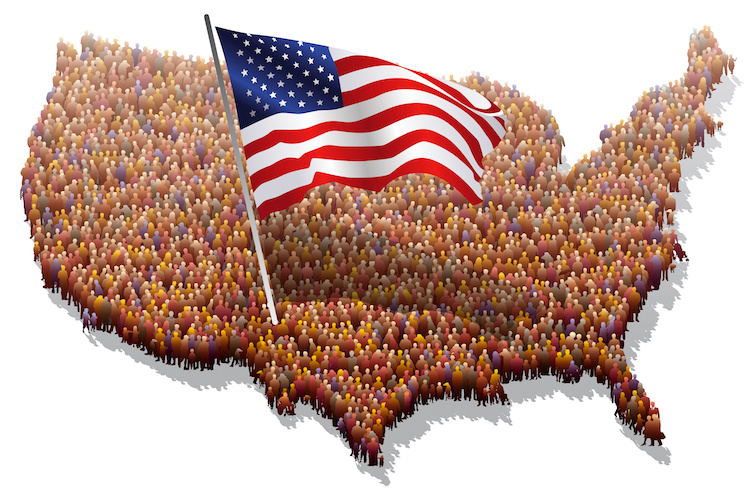 Every 10 years, the U.S. Census Bureau makes a complete count, or census, of its people and industries. When the first census was taken in 1790, the new nation had fewer than 4 million people, almost all living along the East Coast.

Today, the total resident population of 281.4 million, is a rich mosaic of national origins, spanning a broader age spectrum and exhibiting a more diverse range of living arrangements then ever before, as illustrated by Census Bureau demographic data.

Here are a few examples:

The United States has seen a rapid growth in its elderly population during the 20th century. The number of Americans aged 65 and older climbed to 35 million in 2000, compared with 3.1 million in 1900. For the same years, the ratio of elderly Americans to the total population jumped from one in 25 to one in eight. The trend is guaranteed to continue in the coming century as the baby-boom generation grows older. Between 1990 and 2020, the population aged 65 to 74 is projected to grow 74 percent.

Because these older age groups are growing so quickly, the median age (with half of all Americans above and half below) reached 35.3 years in 2000, the highest it has ever been. West Virginia’s population continued to be the nation’s oldest, with a median age of 38.6 years; Utah was the youngest state, with a median age of 26.7 years.

About 52% of American adults in 2000 were married and living with their spouse. Another 24% had never married, 7% were widowed. and 10% were divorced.

Of the 105.5 mil households in the United States, 71.8 % included or constituted a family — that is, 2 or more people related by blood, marriage, or adoption. The remaining households consisted of a person living alone (25.8%) or 2 or more unrelated people (6.1%).

About half (49%) of all families included parents and children under 18. All in all, 36% could be considered “traditional” families, that is, consisting of a married couple with children. Since 1970, these traditional families have declined significantly as a percentage of all families, dropping 14 percentage points. However, their percentage has dropped only 1 point since 1990.

While the number of single mothers (9.8 mil remained about the same from 1995 to 1998, the number of single fathers rose from 1.7 mil to 2.1 mil. About 28% of children under 18 years of age lived with just I parent in 1998 (around 23% with their mother only, 4% with their father only), while 68% lived with both parents and 4% with other relatives or people not related to them. Nearly 6% of all children under 18 lived in their grandparents’ home.

Reflecting the movement of the population during the 1990s and continuing a decades-old southwesterly trend, the nation’s center of population moved 12.1 miles south and 32.5 miles west during the decade to a point about 3 miles east of Edgar Springs, MO.