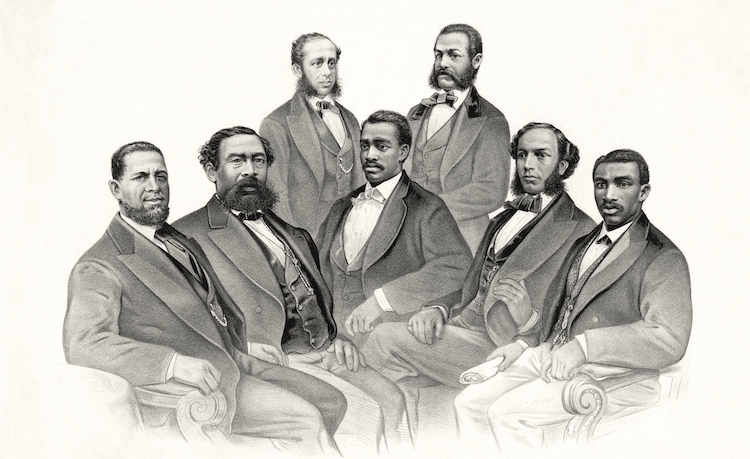 Among the flood of immigrants to North America, one group came unwillingly. These were Africans, 500,000 of whom were brought over as slaves between 1619 and 1808, when importing slaves into the United States became illegal. The practice of owning slaves and their descendants continued, however, particularly in the agrarian South, where many laborers were needed to work the fields.

The process of ending slavery began in April 1861 with the outbreak of the American Civil War between the free states of the North and the slave states of the South, 11 of which had left the Union. On January 1, 1863, midway through the war, President Abraham Lincoln issued the Emancipation Proclamation, which abolished slavery in those states that had seceded. Slavery was abolished throughout the United States with the passage of the Thirteenth Amendment to the country’s Constitution in 1865.

Even after the end of slavery, however, American blacks were hampered by segregation and inferior education. In search of opportunity, African Americans formed an internal wave of immigration, moving from the rural South to the urban North. But many urban blacks were unable to find work; by law and custom they had to live apart from whites, in run-down neighborhoods called ghettos.

In the late 1950s and early 1960s, African Americans, led by Dr. Martin Luther King, Jr., used boycotts, marches, and other forms of nonviolent protest to demand equal treatment under the law and an end to racial prejudice.

A high point of this civil rights movement came on August 28, 1963, when more than 200,000 people of all races gathered in front of the Lincoln Memorial in Washington, D.C., to hear King say: “I have a dream that one day on the red hills of Georgia the sons of former slaves and the sons of former slave-holders will be able to sit down together at the table of brotherhood….I have a dream that my four little children will one day live in a nation where they will not be judged by the color of their skin, but by the content of their character.” Not long afterwards the U.S. Congress passed laws prohibiting discrimination in voting, education, employment, housing, and public accommodations.

Today, African Americans constitute 12.7 percent of the total U.S. population. In recent decades blacks have made great strides, and the black middle class has grown substantially. In 1996, 44 percent of employed blacks held “white-collar” jobs — managerial, professional, and administrative positions rather than service jobs or those requiring manual labor. That same year 23 percent of blacks between ages 18 and 24 were enrolled in college, compared to 15 percent in 1983. The average income of blacks is lower than that of whites, however, and unemployment of blacks — particularly of young men — remains higher than that of whites. And many black Americans are still trapped by poverty in urban neighborhoods plagued by drug use and crime.

In recent years the focus of the civil rights debate has shifted. With antidiscrimination laws in effect and blacks moving steadily into the middle class, the question has become whether or not the effects of past discrimination require the government to take certain remedial steps. Called “affirmative action,” these steps may include hiring a certain number of blacks (or members of other minorities) in the workplace, admitting a certain number of minority students to a school, or drawing the boundaries of a congressional district so as to make the election of a minority representative more likely. The public debate over the need, effectiveness, and fairness of such programs became more intense in the 1990s.

In any case, perhaps the greatest change in the past few decades has been in the attitudes of America’s white citizens. More than a generation has come of age since King’s “I Have a Dream” speech. Younger Americans in particular exhibit a new respect for all races, and there is an increasing acceptance of blacks by whites in all walks of life and social situations.