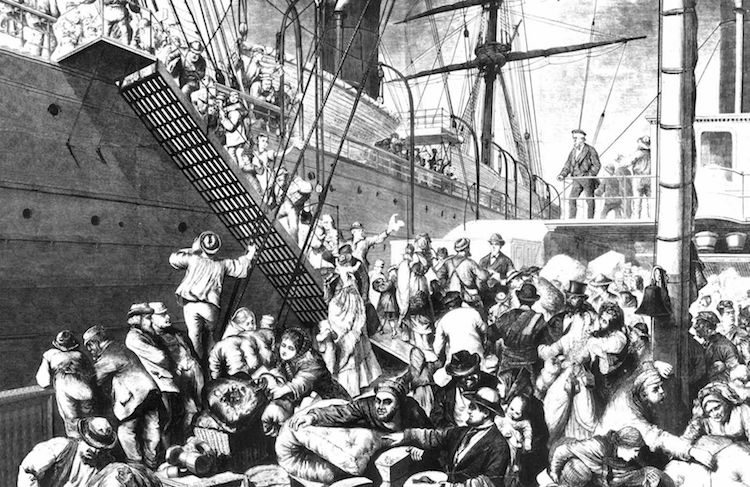 "From the Old to the New World" shows German emigrants boarding a steamer in Hamburg and arriving in New York.

The first European immigrants in American history came from England and the Netherlands. Attracted by reports of great economic opportunities and religious and political freedom, immigrants from many other countries flocked to the United States in increasing numbers, the flow reaching a peak in the years 1892-1924. During the late 19th century, the government operated a special port of entry on Ellis Island; it was in operation from 1892 until 1954 and is now preserved as part of the Statue of Liberty National Monument. The Statue of Liberty, which was a gift from the people of France to the people of America in 1886, stands on an island in New York Harbor, near Ellis Island. Between 1820 and 1979, the United States admitted more than 49 million immigrants.

In 1924, the first laws were passed that set limits on how many people from specific countries would be admitted to the United States. The limits were based on the number of people from that country already living in the country. In 1965, immigration quotas were established according to who applied first; and national quotas were replaced with hemispheric ones. Preference was given to relatives of U.S. citizens and immigrants with specific job skills. In 1978, Congress abandoned hemispheric quotas and established a worldwide ceiling. The United States accepts more immigrants than any other country; in 1998, its population included 25.2 million foreign-born persons (that is 9.3 % of the total population.) The revised immigration law of 1990 created a flexible cap of 675,000 immigrants each year, with certain categories of people exempted from the limit. That law attempts to attract more skilled workers and professionals to the United States and to draw immigrants from countries that have supplied relatively few Americans in recent years.

The U.S. Immigration and Naturalization Service estimates that some 5 million people are living in the United States without permission, and the number is growing by about 275,000 a year. Native-born Americans and legal immigrants worry about the problem of illegal immigration. Many believe that illegal immigrants (also called “illegal aliens”) take jobs from citizens, especially from young people and members of minority groups. Moreover, illegal aliens can place a heavy burden on tax-supported social services.

In 1986 Congress revised immigration law to deal with illegal aliens. Many of those who had been in the country since 1982 became eligible to apply for legal residency that would eventually permit them to stay in the country permanently. In 1990, nearly 900,000 people took advantage of this law to obtain legal status. The law also provided strong measures to combat further illegal immigration and imposed penalties on businesses that knowingly employ illegal aliens.

The steady stream of people coming to America’s shores has had a profound effect on the American character. It takes courage and flexibility to leave your homeland and come to a new country. The American people have been noted for their willingness to take risks and try new things, for their independence and optimism. If Americans whose families have been here longer tend to take their material comfort and political freedoms for granted, immigrants are at hand to remind them how important those privileges are.

Immigrants also enrich American communities by bringing aspects of their native cultures with them. Many black Americans now celebrate both Christmas and Kwanzaa, a festival drawn from African rituals. Hispanic Americans celebrate their traditions with street fairs and other festivities on Cinco de Mayo (May 5). Ethnic restaurants abound in many American cities. President John F. Kennedy, himself the grandson of Irish immigrants, summed up this blend of the old and the new when he called America “a society of immigrants, each of whom had begun life anew, on an equal footing. This is the secret of America: a nation of people with the fresh memory of old traditions who dare to explore new frontiers…. “