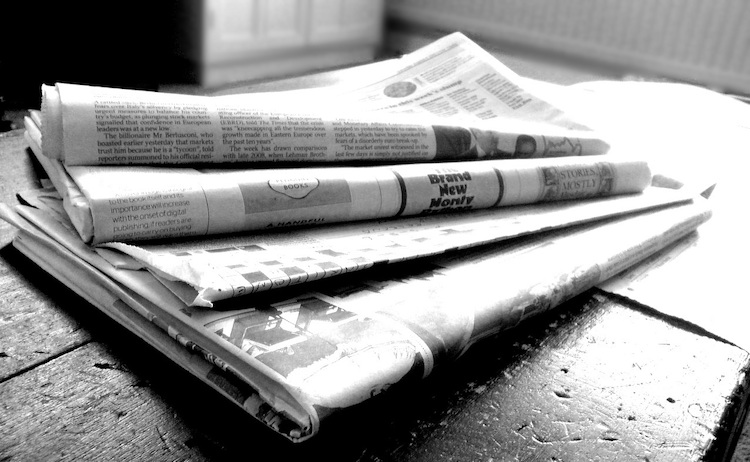 The first U.S. newspaper, Publick Occurrences: Both Foreign and Domestick, first published on September 25, 1690 lasted only one day before it was suppressed by British colonial authorities. Other newspapers quickly sprang up, however, and by 1730, the colonial press had gained sufficient stature to seriously challenge British governors. Historians consider the birth of America’s free-press tradition to have begun with the 1734 trial of John Peter Zenger for seditious libel. After the Revolutionary War (1775-1783), this concept found a home in the Bill of Rights, the first ten amendments to the U.S. Constitution. The First Amendment states: “Congress shall make no law… abridging the freedom of speech or of the press…” These 14 words made it possible for a free press to develop over the next two centuries as one of America’s strongest watchdogs over government actions and protectors of individual rights. In fact, one of America’s greatest political journalists was one of its first, Thomas Paine. Paine’s stirring writings urging independence made him the most persuasive “media” figure of the American Revolution against Britain in 1776.

By the early 1800s, the United States had entered a period of swift technological progress that marked the real beginning of the “modern media.” The inventions of the steamship, the railroad and telegraph brought communications out of the age of windpower and horses. The high-speed printing press was developed, driving down the cost of printing. Expansion of the educational system taught more Americans to read. Publishers realized that a profitable future belonged to cheap newspapers with large readerships and increased advertising. The press went from a small upper class readership to mass readership in just a few years. It was a time that shaped a breed of editors who set the standard for generations of American journalists. Many of these men were hard-headed reformers who openly sided with the common men, opposed slavery and backed expansion of the frontier. They combined idealism with national pride, and their papers became the means by which great masses of new immigrants were taught the American way of life.

By the 1820s, about 25 dailies and more than 400 weeklies were being published in the United States. Horace Greeley founded the New York Tribune in 1841, and it quickly became the most influential newspaper in America. Other important dailies, such as the New York Times, Baltimore Sun, and Chicago Tribune were founded in the 1850s. Two media giants, Joseph Pulitzer and William Randolph Hearst, began building their newspaper empires after the Civil War (1861-1865). Their fierce competition produced “yellow journalism” — sensational and often inaccurate reporting aimed at attracting readers. “Chain” newspapers under the same ownership became a dominant feature in the early 20th century. In addition to the front-running Hearst chain, the Scripps-Howard and Cowles chains grew following World War I. That trend accelerated after World War II, and in 1990, a total of 135 groups owned 1,228 daily newspapers, accounting for about 75 percent of all U.S. dailies. In 1971, there had been 66 cities with two or more dailies owned by separate companies, while in 1995 there were only 36.

In spite of the serious competition from television after World War II, more than two-thirds of American adults read a daily newspaper on an average weekday. The top five daily newspapers by circulation are: the Wall Street Journal, USA Today, the New York Times, Los Angeles Times, and the Washington Post. The number of dailies dropped from 1,763 in 1946 to 1,438 in 1999. However, the number of Sunday papers rose from 497 in 1946 to 905 in 1999, bringing total daily and Sunday papers to 2,388. This figure represents the highest number of newspapers with the highest total circulation — 115 million — for any country in the world.

Today, American newspapers face competition not only from network TV, but from a whole spectrum of targeted and specialized media, including personalized web services, local cable programming, interactive television, special-interest publications, catalogs and other direct-mail initiatives. Newspapers are relying on new technology to meet the challenge. Through the Internet, electronic newspapers can be transmitted to hand-held computers and printed using personal computers.