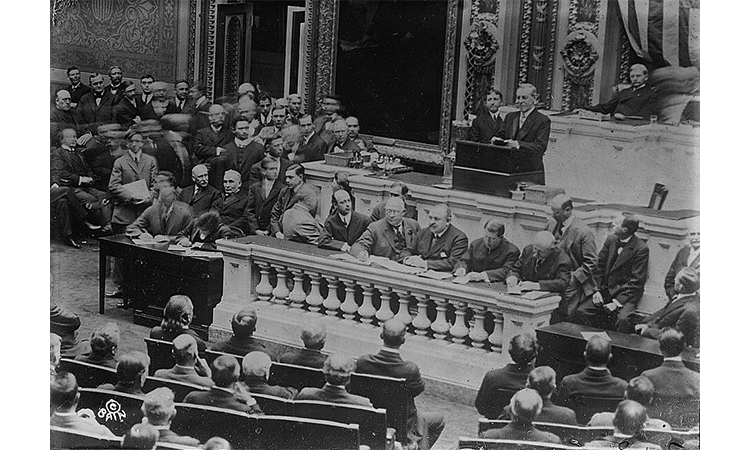 In this speech delivered before the Southern Commercial Congress at Mobile, Alabama, on October 27, 1913, President Woodrow Wilson announced his policy toward Latin America. The promises of the address were not consistently observed, but relations with the Latin American states were materially improved.

…The future is going to be very different for this hemisphere from the past. These States lying to the south of us, which have always been our neighbors, will now be drawn closer to us by innumerable ties, and, I hope, chief of all, by the tie of a common understanding of each other. Interest does not tie nations together; it sometimes separates them. But sympathy and understanding does unite them, and I believe that by the new route that is just about to be opened, while we physically cut two continents asunder, we spiritually unite them. It is a spiritual union which we seek….
We must prove ourselves their friends, and champions upon terms of equality and honor. You cannot be friends upon any other terms than upon the terms of equality. You cannot be friends at all except upon the terms of honor. We must show ourselves friends by comprehending their interest whether it square with our own interest or not. It is a very perilous thing to determine the foreign policy of a nation in the terms of material interest. It not only is unfair to those with whom you are dealing, but it is degrading as regards your own actions.

Comprehension must be the soil in which shall grow all the fruits of friendship, and there is a reason and a compulsion lying behind all this which is dearer than anything else to the thoughtful men of America, I mean the development of constitutional liberty in the world. Human rights, national integrity, and of opportunity as against material interests-that is the issue which we now have to face. I want to take this occasion to say that the United States will never again seek one additional foot of territory by conquest. She will devote herself to showing that she knows how to make honorable and fruitful use of the territory she has, and she must regard it as one of the duties of friendship to see that from no quarter are material interests made superior to human liberty and national opportunity. I say this, not with a single thought that anyone will gainsay it, but merely to fix in our consciousness what our real relationship with the rest of America is.

It is the relationship of a family of mankind devoted to the development of true constitutional liberty. We know that that is the soil out of which the best enterprise springs. We know that this is a cause which we are making in common with our neighbor because we have had to make it for ourselves.

Reference has been made here to day to some the national problems which confront us as a Nation. What is at the heart of all our national problems? It that we have seen the hand of material interest sometimes about to close upon our dearest rights and possessions. We have seen material interests threaten constitutional freedom in the United States; therefore, we will now know how to sympathize with those in the rest of America who have to contend with such powers, not only within their borders but from outside their borders also….