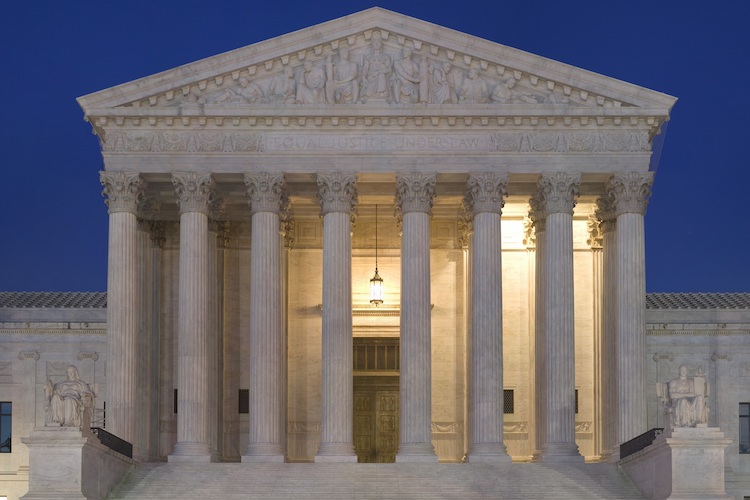 Rulings and interpretations by the Supreme Court, since its creation in 1789, have given substance to the basic structure of the democratic system and contributed to its development. Among the many decisions which have profoundly influenced the country’s history are those described below.

Chief Justice John Marshall claimed for the Supreme Court the power of judicial review of Acts of Congress. Since that time the Court has had authority to declare unconstitutional both State and Federal laws which it deems “repugnant to the Constitution.”

1819 McCulloch v. Maryland. The Government of the United States is a government of the people and its powers emanate from the people. Though its powers are limited, where authority is granted, it is granted fully and completely; in that realm where it has authority, it is supreme. In achieving its legitimate ends, it may use whatever means are appropriate.

This was a decision not of the Supreme Court but of the highest court of the State of Massachusetts. In the Federal system most matters having to do with labor were long supposed to be entirely under the jurisdiction of the States. This decision laid down the principle-never thereafter abandoned-that labor had a right to organize in unions, and that a strike for higher wages or shorter hours was not a “conspiracy in restraint of trade” but a legitimate labor activity.

In unanimous decision the Court ruled that military courts should be denied the right to try civilians, reaffirming the “birthright of every American citizen, when charged with crime, to be tried and punished according to the common law.” The decision further stated that both the military and the President are controlled by law and have their appropriate spheres to duty which must not be exceeded.

This famous decision sustained the right of the States to regulate the rates charged by warehouses for grain storage. In the course of the opinion Chief Justice Waite laid down the principle, now universally accepted, that wherever property is “affected with a public interest” the public has an interest in its use and may regulate that use.

In a powerful opinion by Justice Miller, the Court upheld Congress’ power to punish as a crime against Federal law private interference with the right of any American citizen to vote in a Federal election. It made clear that the right of all Americans to vote for their representatives in Congress must be protected.

This decision, sustaining the right of a State to regulate the working hours of women, is the judicial foundation for much of the social welfare legislation, both State and national, of the past half century.

The State of Oregon had required by law that all children attend public schools. This decision held that such a requirement was an improper interference with religious freedom, and that the State could not hamper or destroy private or parochial schools.

The State of Louisiana laid a discriminatory tax on newspapers with a circulation of over twenty thousand copies. The Court held that this tax violated the guarantee of freedom of the press in the First Amendment to the Constitution. The purpose of that amendment was “to preserve an untrammeled press as a vital source of information.”

Chief Justice Hughes delivered a Court opinion establishing the validity of minimum wage laws. In time minimum wage standards spread throughout the country, and, today, a Federal Minimum Wage Act guarantees a wage of not less than $2.20 an hour for workers employed by business engaged in interstate commerce.

In a decision guaranteeing the workers’ right of collective bargaining and forbidding employers to interfere with the formation of labor unions, the Supreme Court encouraged the rapid growth of modern labor unions. Today, over one-fourth of America’s total labor force are members of trade unions.

Earlier efforts to outlaw child labor by Federal legislation had proved abortive. This decision sustained the provision of the Fair Labor Standards Act outlawing the labor of children in industry, as a proper exercise of Congressional control over commerce.

The State of West Virginia had required a flag salute from all children in public schools; children who refused to salute the flag could be dismissed from school. The Court held that to require a flag salute from the children of parents who had religious scruples against such a gesture-in this case the Jehovah’s Witnesses-was a violation of the freedom of religion guaranteed by the First Amendment.

This case tested the validity of State laws that provided for racial segregation in the public schools. The Supreme Court ruled that “separate educational facilities are inherently unequal.” It followed this ruling with another on May 31, 1955, which established the principle that desegregation must proceed with “all deliberate speed.” The lower courts were assigned the responsibility for applying this principle. These rulings started a substantial change in the legal status of Negroes not only in education but in other fields as well.

In this case (and others similar to it), the principle was established that a citizen being tried in a State court must be provided counsel to assure the same protection of his rights that he enjoys in a Federal court, by virtue of the first ten amendments to the Constitution.

In a landmark decision, the Court extended its one-vote doctrine to local governments.

The ruling in this case prohibited racial discrimination in all sales and rentals of real estate, turning the century-old civil-rights law of 1866 into a sweeping fair housing statute.

The Court held that the Fifth Amendment to the Constitution, stating that one cannot be tried twice for the same crime, applies to the separate states as well as to the Federal Government.

In this case the Court ruled that the Fourth Amendment requires a warrant for any search incident to an arrest that goes beyond the suspect’s immediate surroundings.

In an extension of the school desegregation decision of 1954, the Court ruled that State-imposed segregation was a violation of the “equal protection” clause of the Fourteenth Amendment.

The Court ruled the no indigent person may be jailed for a petty; offense unless he has been furnished free legal counsel or has waived his right to an attorney This was the first Supreme Court ruling whichl extends the Sixth Amendment’s guarantee for counsel to misdemeanor trials that usuall’ carry punishment of less than a year in prison.

The Court held unconstitutional a State law prohibiting access to the ballot to political parties not willing to file an affidavit renouncing overthrow of the United States Government by force or violence.

The Supreme Court declared that women must receive equal pay for equal work, whether or not men doing the same job work different shifts or claim special privileges.

The Supreme Court rule that individuals denied employment because of race, and then later hired by the same organization, should be awarded the seniority and benefits they would have accumulated if hired in the first instance.

Any reference obtained from this server to a specific commercial product, process, or service does not constitute or imply an endorsement by the United States Government of the product, process, or service, or its producer or provider. The views and opinions expressed in any referenced document do not necessarily state or reflect those of the United States Government. Every effort is made to provide accurate and complete information. However, we cannot guarantee that there will be no errors. The U.S. Embassy assumes no legal liability for the accuracy, completeness, or usefulness of any information, product, or process disclosed herein and does not represent that use of such information, product, or process would not infringe on privately owned rights.