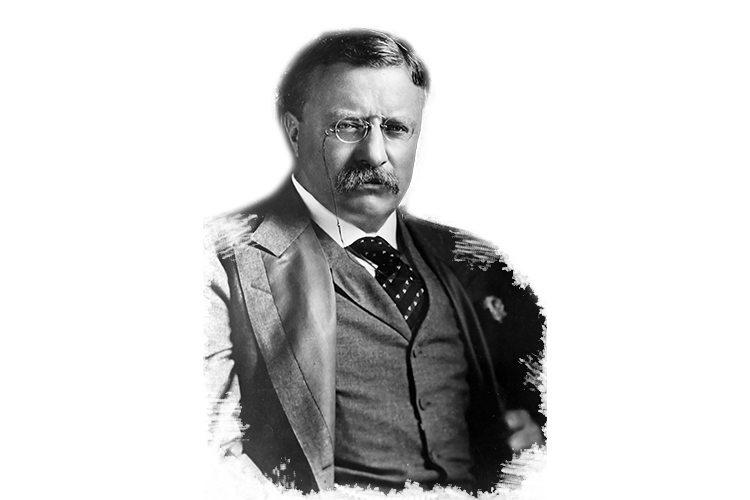 President Theodore Roosevelt (1858-1919) was an ardent advocate of outdoor life, and of all his policies that of conservation of the nation’s natural resources was of the most permanent significance. In his first message to Congress, he had declared that the forest and water problems were the most vital domestic problems facing the American people. During his administration he succeeded in setting aside almost 60 million hectares of timber land in the United States proper and some 34 million hectares of mineral lands in Alaska. More than this, he dramatized the conservation problem before the Nation by his speeches, his actions, and by the convening of the Conservation Conference, making the protection of natural resources a national issue. Following is an excerpt from his Seventh Annual Message to Congress on December 3, 1907.

To the Senate and House of Representatives:

. . .The conservation of our natural resources and their proper use constitute the fundamental problem which underlies almost every other problem of our national life. . ..As a nation we not only enjoy a wonderful measure of present prosperity but if this prosperity is used aright it is an earnest of future success such as no other nation will have. The reward of foresight for this nation is great and easily foretold. But there must be the look ahead, there must be a realization of the fact that to waste, to destroy, our natural resources, to skin and exhaust the land instead of using it so as to increase its usefulness, will result in undermining in the days of our children the very prosperity which we ought by right to hand down to them amplified and developed. For the last few years, through several agencies, the government has been endeavoring to get our people to look ahead and to substitute a planned and orderly development of our resources in place of a haphazard striving for immediate profit. Our great river systems should be developed as national water highways, the Mississippi, with its tributaries, standing first in importance, and the Columbia second, although there are many others of importance on the Pacific, the Atlantic, and the Gulf slopes. The National Government should undertake this work, and I hope a beginning will be made in the present Congress; and the greatest of all our rivers, the Mississippi, should receive special attention. From the Great Lakes to the mouth of the Mississippi there should be a deep waterway, with deep waterways leading from it to the East and the West. Such a waterway would practically mean the extension of our coastline into the very heart of our country. It would be of incalculable benefit to our people. If begun at once it can be carried through in time appreciably to relieve the congestion of our great freight-carrying lines of railroads. The work should be systematically and continuously carried forward in accordance with some well-conceived plan. The main streams should be improved to the highest point of efficiency before the improvement of the branches is attempted; and the work should be kept free from every taint of recklessness or jobbery. The inland waterways which lie just back of the whole Eastern and Southern coasts should likewise be developed. Moreover, the development of our waterways involves many other important water problems, all of which should be considered as part of the same general scheme. The government dams should be used to produce hundreds of thousands of horse-power as an incident to improving navigation; for the annual value of the unused water-powered of the Untied States perhaps exceeds the annual value of the products of all our mines. As an incident to creating the deep waterways down the Mississippi, the government should build along its whole lower length levees which, taken together with the control of the headwaters, will at once and forever put a complete stop to all threat of floods in the immensely fertile delta region. The territory lying adjacent to the Mississippi along its lower course will thereby become one of the most prosperous and populous, as it already is one of the most fertile, farming regions in all the world. I have appointed an inland waterways commission to study and outline a comprehensive scheme of development along all the lines indicated. Later I shall lay its report before the Congress.

Irrigation should be far more extensively developed than at present, not only in the States of the great plains and the Rocky Mountains, but in many others, as, for instance, in large portions of the South Atlantic and Gulf States, where it should go hand in hand with the reclamation of swampland. The Federal Government should seriously devote itself to this task, realizing that utilization of waterways and water-power, forestry, irrigation, and the reclamation of lands threatened with overflow, are all interdependent parts of the same problem. The work of the Reclamation Service in developing the larger opportunities of the Western half of our country for irrigation is more important than almost any other movement. The constant purpose of the government in connection with the Reclamation Service has been to use the water resources of the public lands for the ultimate greatest good of the greatest number; in other words, to put upon the land permanent home-makers, to use and develop it for themselves and for their children and children’s children. . . .

The effort of the government to deal with the public land has been based upon the same principle as that of the Reclamation Service. The land law system which was designed to meet the needs of the fertile and well-watered regions of the Middle West has largely broken down when applied to the drier regions of the great plains, the mountains, and much of the Pacific slope, where a farm of 160 acres is inadequate for self-support. . . .Three years ago a public-lands commission was appointed to scrutinize the law, and defects, and recommend a remedy. Their examination specifically showed the existence of great fraud upon the public domain, and their recommendations for changes in the law were made with the design of conserving the natural resources of every part of the public lands by putting it to its best use. Especial attention was called to the prevention of settlement by the passage of great areas of public land into the hands of a few men, and to the enormous waste caused by unrestricted grazing upon the open range. The recommendations of the Public-Lands Commission are sound, for they are especially in the interest of the actual home-maker; and where the small home-maker cannot at present utilize the land they provide that the government shall keep control of it so that it may not be monopolized by a few men. The Congress has not yet acted upon these recommendations, but they are so just and proper, so essential to our national welfare, that I feel confident, if the Congress will take time to consider them, that they will ultimately be adopted.

Some such legislation as that proposed is essential in order to preserve the great stretches of public grazing-land which are unfit for cultivation under present methods and are valuable only for the forage which they supply. These stretches amount in all to some 300,000,000 acres, and are open to the free grazing of cattle, sheep, horses, and goats, without restriction. Such a system, or lack of system, means that the range is not so much used as wasted by abuse. As the West settles, the range becomes more and more overgrazed. Much of it cannot be used to advantage unless it is fenced, for fencing is the only way by which to keep in check the owners of nomad flocks which roam hither and thither, utterly destroying the pastures and leaving a waste behind so that their presence is incompatible with the presence of home-makers. The existing fences are all illegal. . . . All these fences, those that are hurtful and those that are beneficial, are alike illegal and must come down. But it is an outrage that the law should necessitate such action on the part of the Administration. The unlawful fencing of public lands for private grazing must be stopped, but the necessity which occasioned it must be provided for. The Federal Government should have control of the range, whether by permit or lease, as local necessities may determine. Such control could secure the great benefit of legitimate fencing, while at the same time securing and promoting the settlement of the country. . . . The government should part with its title only to the actual home-maker, not to the profit-maker who does not care to make a home. Our prime object is to secure the rights and guard the interests of the small ranchman, the man who ploughs and pitches hay for himself. It is this small ranchman, this actual settler and home-maker, who in the long run is most hurt by permitting thefts of the public land in whatever form.

Optimism is a good characteristic, but if carried to an excess it becomes foolishness. We are prone to speak of the resources of this country as inexhaustible; this is not so. The mineral wealth of the country, the coal, iron, oil, gas, and the like, does not reproduce itself, and therefore is certain to be exhausted ultimately; and wastefulness in dealing with it today means that our descendants will feel the exhaustion a generation or two before they otherwise would. But there are certain other forms of waste which could be entirely stopped-the waste of soil by washing, for instance, which is among the most dangerous of all wastes now in progress in the United States, is easily preventible, so that this present enormous loss of fertility is entirely unnecessary. The preservation or replacement of the forests is one of the most important means of preventing this loss. We have made a beginning in forest preservation, but so rapid has been the rate of exhaustion of timber in the United States in the past, and so rapidly is the remainder being exhausted, that the country is unquestionably on the verge of a timber famine which will be felt in every household in the land. The present annual consumption of lumber is certainly three times as great as the annual growth; and if the consumption and growth continue unchanged, practically all our lumber will be exhausted in another generation, while long before the limit to complete exhaustion is reached the growing scarcity will make itself felt in many blighting ways upon our national welfare. About twenty per cent of our forested territory is now reserved in national forests, but these do not include the most valuable timberlands, and in any event the proportion is too small to expect that the reserves can accomplish more than a mitigation of the trouble which is ahead for the nation. .
We should acquire in the Appalachian and White Mountain regions all the forest-lands that it is possible to acquire for the use of the nation. These lands, because they form a national asset, are as emphatically national as the rivers which they feed, and which flow through so many States before they reach the ocean.