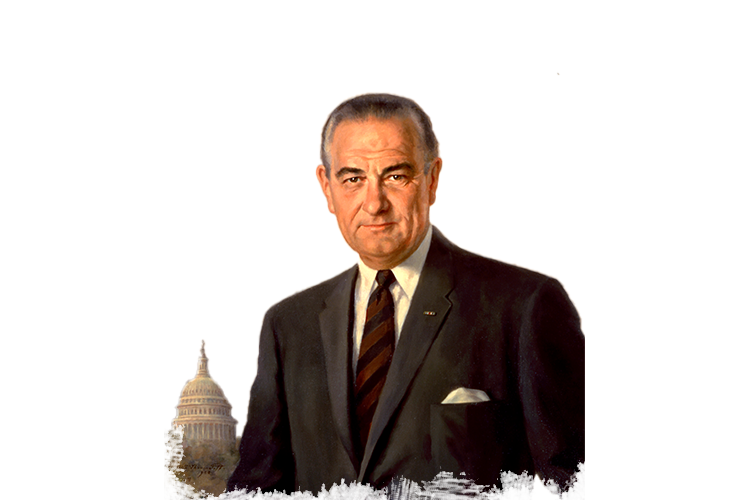 Shortly after Vice President Lyndon B. Johnson succeeded John F. Kennedy as President, he moved forthrightly to help eradicate a persistent evil in American life: racial discrimination. Mr. Johnson urged the Congress to enact a law, proposed by President Kennedy in 1963, that would insure the voting rights of all Americans; make it a punishable offense to deny anyone entry into hotels, restaurants and other public places solely on the basis of race or religion; speed progress toward racially integrated schools; and provide a means of assuring equal job opportunities for all.
After lengthy debate in the Congress, the bill was passed in 1964 by overwhelming majorities in both Houses. The law is the most sweeping civil rights measure ever enacted and constitutes a landmark in American legislative history. Before signing it, President Johnson broadcast a statement to the American people on July 2, 1964.

“(2) No person acting under color of law shall–

“(A) in determining whether any individual is qualified under State law or laws to vote in any Federal election, apply any standard, practice, or procedure different from the standards, practices, or procedures applied under such law or laws to other individuals within the same county, parish, or similar political subdivision who have been found by State officials to be qualified to vote;

“(B) deny the right of any individual to vote in any Federal election because of an error or omission on any record or paper relating to any application, registration, or other act requisite to voting, if such error or omission is not material in determining whether such individual is qualified under State law to vote in such election; or

“(C) employ any literacy test as a qualification for voting in any Federal election unless (i) such test is administered to each individual and is conducted wholly in writing, and (ii) a certified copy of the test and of the answers given by the individual is furnished to him within twenty-five days of the submission of his request made within the period of time during which records and papers are required to be retained and preserved pursuant to title III of the Civil Rights Act of 1960 (42 U.S.C. 1974–74e; 74 Stat. 88): Provided, however, That the Attorney General may enter into agreements with appropriate State or local authorities that preparation, conduct, and maintenance of such tests in accordance with the provisions of applicable State or local law, including such special provisions as are necessary in the preparation, conduct, and maintenance of such tests for persons who are blind or otherwise physically handicapped, meet the purposes of this subparagraph and constitute compliance therewith.

TITLE II–INJUNCTIVE RELIEF AGAINST DISCRIMINATION IN PLACES OF PUBLIC ACCOMMODATION

SEC. 201. (a) All persons shall be entitled to the full and equal enjoyment of the goods, services, facilities, and privileges, advantages, and accommodations of any place of public accommodation, as defined in this section, without discrimination or segregation on the ground of race, color, religion, or national origin.

(b) Each of the following establishments which serves the public is a place of public accommodation within the meaning of this title if its operations affect commerce, or if discrimination or segregation by it is supported by State action:

(1) any inn, hotel, motel, or other establishment which provides lodging to transient guests, other than an establishment located within a building which contains not more than five rooms for rent or hire and which is actually occupied by the proprietor of such establishment as his residence;

(2) any restaurant, cafeteria, lunchroom, lunch counter, soda fountain, or other facility principally engaged in selling food for consumption on the premises, including, but not limited to, any such facility located on the premises of any retail establishment; or any gasoline station;

(3) any motion picture house, theater, concert hall, sports arena, stadium or other place of exhibition or entertainment; and

SEC. 202. All persons shall be entitled to be free, at any establishment or place, from discrimination or segregation of any kind on the ground of race, color, religion, or national origin, if such discrimination or segregation is or purports to be required by any law, statute, ordinance, regulation, rule, or order of a State or any agency or political subdivision thereof.

SEC. 601. No person in the United States shall, on the ground of race, color, or national origin, be excluded from participation in, be denied the benefits of, or be subjected to discrimination under any program or activity receiving Federal financial assistance.