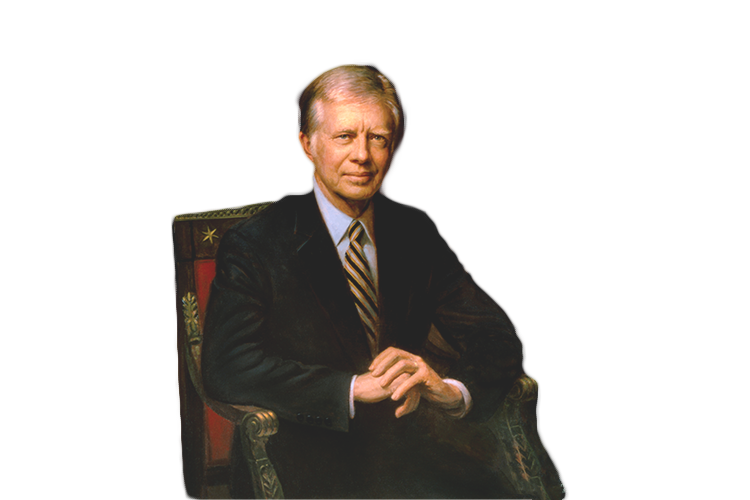 Peace, arms control, a greater role for the Third World in the international economic decision-making process and a steadfast dedication to human rights are key elements in President Carter’s foreign policy. The following is excerpted from the text of his address to the United Nations on March 17, 1977, eight weeks after he was sworn in as President.

…I see a hopeful world, a world dominated by increasing demands for basic freedoms, for fundamental rights, for higher standards of human existence. We are eager to take part in the shaping of this world.
But in seeking such a better world, we are not blind to the reality of disagreement nor to the persisting dangers that confront us. Every headline reminds us of bitter divisions, of national hostilities, of territorial conflicts, of ideological competition….

We can only improve this world if we are realistic about its complexities. The disagreements we face are deeply rooted and they often raise difficult philosophical as well as practical issues. They will not be solved easily nor quickly. The arms race is now imbedded in the fabric of international affairs and can only be contained with the greatest of difficulty. Poverty and inequality are of such monumental scope that it will take decades of deliberate and determined effort even to improve the situation.

I stress these dangers and these difficulties because I want all of us to dedicate ourselves to a prolonged and persistent effort designed to maintain peace and to reduce the arms race. To help build a better and more cooperative international economic system. To work with potential adversaries as well as with our friends to advance the cause of human rights.
In seeking these goals, I recognize that the United States cannot solve the problems of the world. We can sometimes help others resolve their differences, but we cannot do so by imposing our own particular solutions.

¦While the ultimate goal is for all nuclear powers to end testing, we do not regard this as a prerequisite for suspension of tests by the principal nuclear powers; however, the effort to contain the arms race is not a matter just for the United States and the Soviet Union alone. There must be a wider effort to reduce the flow of weapons to all the troubled spots of this globe. Accordingly, we will try to reach broader agreements among producer and consumer nations to limit the export of conventional arms, and we will take initiatives of our own since the United States has become one of the major arms suppliers of the world.

We are deeply committed to halting the proliferation of nuclear weapons among the nations of the world. We will undertake a new effort to reach multilateral agreements, designed to provide legitimate supplies of nuclear fuels while controlling poisonous and dangerous atomic wastes. But the search for peace also means the search for justice. One of the greatest challenges before us as a nation, and therefore one of our greatest opportunities, is to participate in molding a global economic system which will bring greater prosperity to the people of all countries.

I also believe that the developing countries must acquire fuller participation in the global economic decision-maker process.

We must also recognize that the world is facing serious shortages of energy. This is a truly global problem. For our part, we are determined to reduce waste and to work with others toward a proper sharing of the benefits and costs of energy resources.

The search for peace and justice means also respect for human dignity. All the signatories of the U.N. Charter have pledged themselves to observe and respect basic human rights. Thus, no member of the United Nations can claim that mistreatment of its citizens is solely its own business. Equally, no member can avoid its responsibility to review and to speak when fortune or unwarranted deprivation of freedom occurs in any part of the world.
The basic trust of human affairs points toward a more universal demand for fundamental human rights. The United States has a historical birthright to be associated with this process.

We in the United States accept this responsibility in the fullest and most constructive sense. Ours is a commitment, not just a political posture. I know perhaps as well as anyone that our ideals in the area of human rights have not always been attained in the United States, but the American people have an abiding commitment to the full realization of these ideals. We are determined, therefore, to deal with our deficiencies quickly and openly.

In our relations with other countries these mutual concerns will be reflected in our political, our cultural and our economic attitudes.

These then are our basic priorities as we work with other members to strengthen and to improve the United Nations:

– We will strive for peace in the troubled areas of the world.

– We will aggressively seek to control the weaponry of war.

-We will be steadfast in our dedication to the dignity and well-being of people throughout the world.