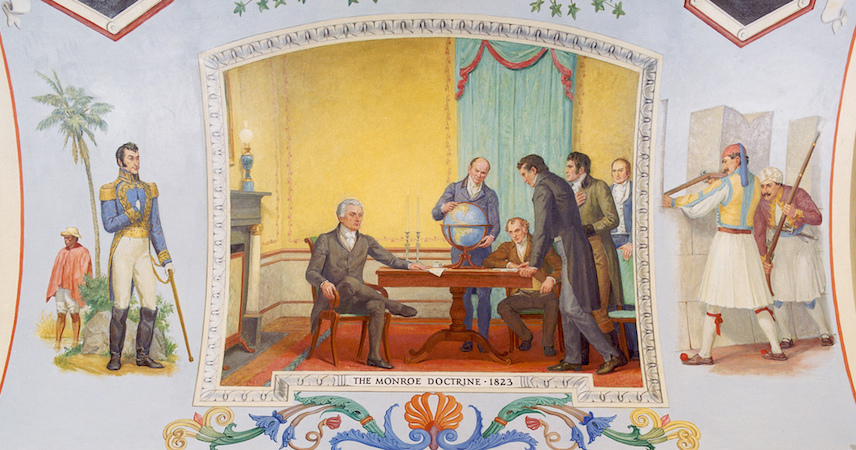 The Monroe Doctrine, announcing in a broad way the separation of the New World from the Old, was the first distinctively American doctrine in international relations. The immediate background of the doctrine was the claims of Russia on the northwest coast of North America and the struggle of the Latin American countries for independence. President Monroe seized the opportunity created by these two issues to announce that the Western Hemisphere was no longer to be considered subject to European conquest or colonization. Some twenty-two years later President Polk reiterated and elaborated upon these principles. In the course of time the Monroe Doctrine ceased to be a unilateral principle and became accepted by other nations. The following is from President Monroe’s Seventh Annual Message to Congress, December 2, 1823.

. . . At the proposal of the Russian Imperial Government, made through the minister of the Emperor residing here, a full power and instructions have been transmitted to the minister of the United States at St. Petersburg to arrange by amicable negotiation the respective rights and interests of the two nations on the northwest coast of this continent. A similar proposal has been made by His Imperial Majesty to the Government of Great Britain, which has likewise been acceded to. The Government of the United States has been desirous by this friendly proceeding of manifesting the great value which they have invariably attached to the friendship of the Emperor and their solicitude to cultivate the best understanding with his Government. In the discussions to which this interest has given rise and in the arrangements by which they may terminate the occasion has been judged proper for asserting, as a principle in which the rights and interests of the United States are involved, that the American continents, by the free and independent condition which they have assumed and maintain, are henceforth not to be considered as subjects for future colonization by any European powers. . .

It was stated at the commencement of the last session that a great effort was then making in Spain and Portugal to improve the condition of the people of those countries, and that it appeared to be conducted with extraordinary moderation. It need scarcely be remarked that the results have been so far very different from what was then anticipated. Of events in that quarter of the globe, with which we have so much intercourse and from which we derive our origin, we have always been anxious and interested spectators. The citizens of the United States cherish sentiments the most friendly in favor of the liberty and happiness of their fellow-men on that side of the Atlantic. In the wars of the European powers in matters relating to themselves we have never taken any part, nor does it comport with our policy to do so. It is only when our rights are invaded or seriously menaced that we resent injuries or make preparation for our defense. With the movements in this hemisphere we are of necessity more immediately connected, and by causes which must be obvious to all enlightened and impartial observers. The political system of the allied powers is essentially different in this respect from that of America. This difference proceeds from that which exists in their respective Governments; and to the defense of our own, which has been achieved by the loss of so much blood and treasure, and matured by the wisdom of their most enlightened citizens, and under which we have enjoyed unexampled felicity, this whole nation is devoted. We owe it, therefore, to candor and to the amicable relations existing between the United States and those powers to declare that we should consider any attempt on their part to extend their system to any portion of this hemisphere as dangerous to our peace and safety. With the existing colonies or dependencies of any European power we have not interfered and shall not interfere. But with the Governments who have declared their independence and maintain it, and whose independence we have, on great consideration and on just principles, acknowledged, we could not view any interposition for the purpose of oppressing them, or controlling in any other manner their destiny, by any European power in any other light than as the manifestation of an unfriendly disposition toward the United States. In the war between those new Governments and Spain we declared our neutrality at the time of their recognition, and to this we have adhered, and shall continue to adhere, provided no change shall occur which, in the judgement of the competent authorities of this Government, shall make a corresponding change on the part of the United States indispensable to their security.

The late events in Spain and Portugal shew that Europe is still unsettled. Of this important fact no stronger proof can be adduced than that the allied powers should have thought it proper, on any principle satisfactory to themselves, to have interposed by force in the internal concerns of Spain. To what extent such interposition may be carried, on the same principle, is a question in which all independent powers whose governments differ from theirs are interested, even those most remote, and surely none of them more so than the United States. Our policy in regard to Europe, which was adopted at an early stage of the wars which have so long agitated that quarter of the globe, nevertheless remains the same, which is, not to interfere in the internal concerns of any of its powers; to consider the government de facto as the legitimate government for us; to cultivate friendly relations with it, and to preserve those relations by a frank, firm, and manly policy, meeting in all instances the just claims of every power, submitting to injuries from none. But in regard to those continents circumstances are eminently and conspicuously different. It is impossible that the allied powers should extend their political system to any portion of either continent without endangering our peace and happiness; nor can anyone believe that our southern brethren, if left to themselves, would adopt it of their own accord. It is equally impossible, therefore, that we should behold such interposition in any form with indifference. If we look to the comparative strength and resources of Spain and those new Governments, and their distance from each other, it must be obvious that she can never subdue them. It is still the true policy of the United States to leave the parties to themselves, in hope that other powers will pursue the same course. . . .