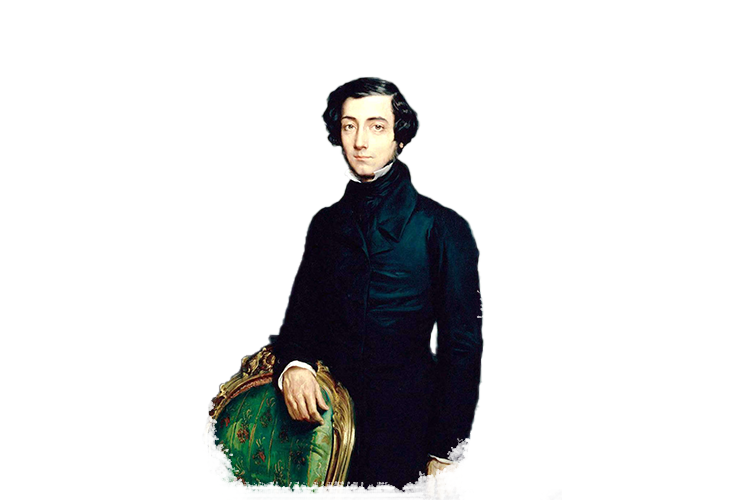 Strangers can often observe with greater clarity that with which we are too familiar, and throughout their history Americans have been fascinated by the comments of foreign travelers. Moreover, those comments have often highlighted aspects of American culture and society that Americans themselves had not previously noticed. Of the many travelers who visited America and wrote down their impressions, none proved as perceptive as Alexis de Tocqueville, and none of their works has had such an enduring impact, not only on explaining Jacksonian America to the Old World, but to the New as well.

De Tocqueville and Gustave de Beaumont, both French aristocrats, were sent by the French government in 1831 to study the American prison system. They arrived in New York in May of that year, and spent nine months traveling around the United States, taking notes not only on prisons, but on all aspects of American society, its economy and its unique political system. After they returned to France in February 1832, the two men submitted their penal report, and Beaumont wrote a novel about race relations in the United States.

But it would be de Tocqueville’s work, which went through innumerable editions in the nineteenth century, that became a classic. American politics fascinated him, and he caught the sense–so alien to the Old World–of the dedication of common people to the political process. He came when Andrew Jackson was president and political parties were undergoing a major transformation, from small organizations dominated by local elite caucuses to mass membership bodies devoted to electing officials at the local, state and national level. As he noted with amazement, “No sooner do you set foot upon American ground, than you are stunned by a kind of tumult. . . . Almost the only pleasure which an American knows is to take a part in the government, and to discuss its measures. To give but one example of this enthusiasm, at a great outdoor gathering at Auburn, New York, Senator Rivers of Virginia addressed the audience for three and a half hours! After the crowd took a brief stretch, Senator Legar&egrave; of South Carolina went on for another two and a half hours!”

“Democracy in America” is acclaimed for its author’s perception, but it has also been criticized by recent scholars for its glaring gaps as well. The aristocratic de Tocqueville chose not to see many things, including poverty in the cities and the plight of slaves. But his account of Jacksonian America captures the energy of the young nation and, above all, how intensely people made democracy work.