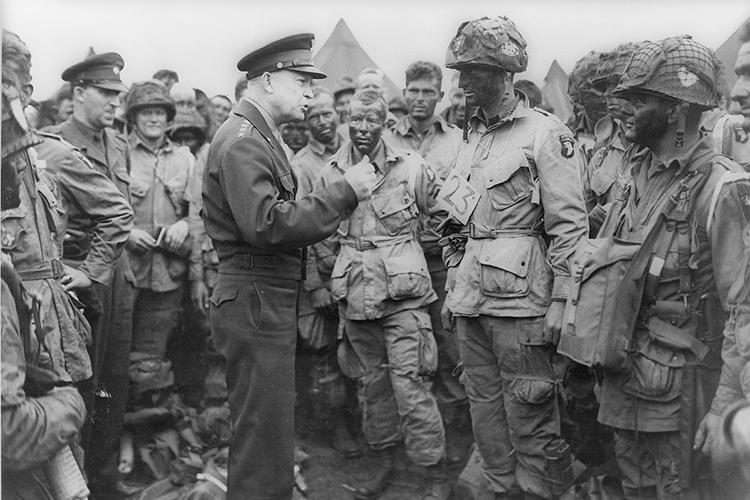 Before Roosevelt’s second term was well under way, his domestic program was overshadowed by a new danger little noted by average Americans: the expansionist designs of totalitarian regimes in Japan, Italy and Germany. As Germany, Italy and Japan continued their aggression, the United States announced that no country involved in the conflict could look to it for aid. Neutrality legislation, enacted from 1935 to 1937, prohibited trade with or credit to any of the warring nations. Neutrality was also the initial American response to the outbreak of war in Europe in 1939.

With the fall of France and the air war against Britain in 1940, the debate intensified between those who favored aiding the democracies and the isolationists. In the end, the interventionist argument won. The United States joined Canada in a Mutual Board of Defense, and aligned with the Latin American republics in extending collective protection to the nations in the Western Hemisphere. Congress voted immense sums for rearmament and in early 1941 approved the Lend-Lease Program, which enabled President Roosevelt to transfer arms and equipment to any nation (notably Great Britain, the Soviet Union and China) deemed vital to the defense of the United States. The 1940 presidential election yielded another majority for Roosevelt and for the first time in U.S. history, a president was elected to a third term.

On December 7, 1941, the Japanese bombed the U.S. Pacific fleet at Pearl Harbor, Hawaii. On December 8, Congress declared a state of war with Japan; three days later its allies Germany and Italy declared war on the United States. The nation rapidly geared itself for mobilization of its people and its entire industrial capacity. All the nation’s activities — farming, manufacturing, mining, trade, labor, investment, communications, even education and cultural undertakings — were in some fashion brought under new and enlarged controls. By the end of 1943, approximately 65 million men and women were in uniform or in war-related occupations.

The western Allies decided that their essential military effort was to be concentrated in Europe, where the core of enemy power lay, while the Pacific theater was to be secondary. On D-Day, June 6, 1944, Allied forces landed in Normandy. On August 25, Paris was liberated. By February and March 1945, troops advanced into Germany. On May 7, Germany surrended. The war in the Pacific continued after Germany’s surrender. On August 6, an atomic bomb was dropped on the city of Hiroshima and on August 8, an atomic bomb was dropped on Nagasaki. On August 14, Japan agreed to terms set at Potsdam on July 26 and on September 2, 1945, Japan formally surrendered.