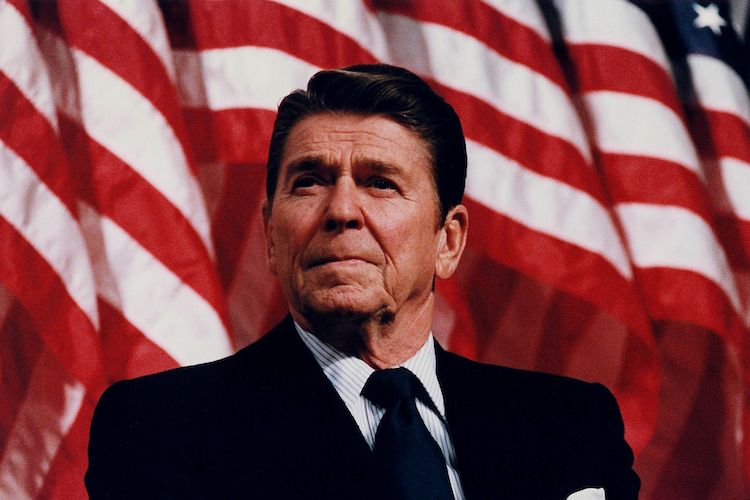 President Ronald Reagan speaking at a Rally for Senator Durenberger in Minneapolis, Minnesota, 1982.

Shifts in the structure of American society, begun years or even decades earlier, had become apparent by the time the 1980s arrived. The composition of the population and the most important jobs and skills in American society had undergone major changes. The dominance of service jobs became undeniable. The 1965 reform in immigration policy shifted the focus away from Western Europe, and the number of new arrivals from Asia and Latin America increased. For many Americans, the economic, social and political trends of the previous two decades, engendered a mood of disillusionment. After 26 consecutive years of Democratic control, the Republicans gained a majority in the Senate in 1980 and Republican Ronald Reagan was elected president.

The central theme of Reagan’s domestic policy was that the federal government had become too big and federal taxes too high. In foreign policy, President Reagan sought a more assertive role for the nation. In relations with the Soviet Union, President Reagan’s declared policy was one of peace through strength. During his first term, the administration increased spending on defense expenditures. After the reelection in 1984, Reagan softened his rigid position on arms control. A recession marked the early years of Reagan’s presidency, but conditions started to improve in 1983 as the United States entered one of the longest periods of sustained economic growth since World War II.

In 1988, Reagan’s vice president during all eight years of his presidency, George Bush was elected the 41st president of the United States. Bush faced a dramatically changing world, as the Cold War ended after 40 bitter years, the Communist empire broke up, and the Berlin Wall fell. The Soviet Union ceased to exist; and reformist President Mikhail Gorbachev, whom Bush had supported, resigned. While Bush hailed the march of democracy, he insisted on restraint in U. S. policy toward the group of new nations. In foreign policy, President Bush’s greatest test came when Iraqi President Saddam Hussein invaded Kuwait, then threatened to move into Saudi Arabia. The U.N. Security Council passed 12 resolutions condemning the Iraqi invasion and imposing wide-ranging economic sanctions on Iraq. The 12th resolution, issued on November 29, approved the use of force by U.N. member states if Iraq did not withdraw from Kuwait by January 15, 1991. War broke out less than 24 hours after the U.N. deadline. The United States, Great Britain, France, Italy, Saudi Arabia and Kuwait succeeded in liberating Kuwait. At home, Americans faced some deep and familiar problems as the United States again found itself in recession.

In 1992, voters elected Bill Clinton, a Democrat, president. Clinton and his Vice-President, Senator Albert Gore Jr., represented a new generation in American political leadership. For the first time in 12 years both the White House and Congress were held by the same party. But that political edge was brief; the Republicans won both houses of Congress in 1994. In 1998, as a result of issues surrounding personal indiscretions with a young woman White House intern, Clinton was the second U.S. president to be impeached by the House of Representatives. He was tried in the Senate and found not guilty of the charges brought against him.