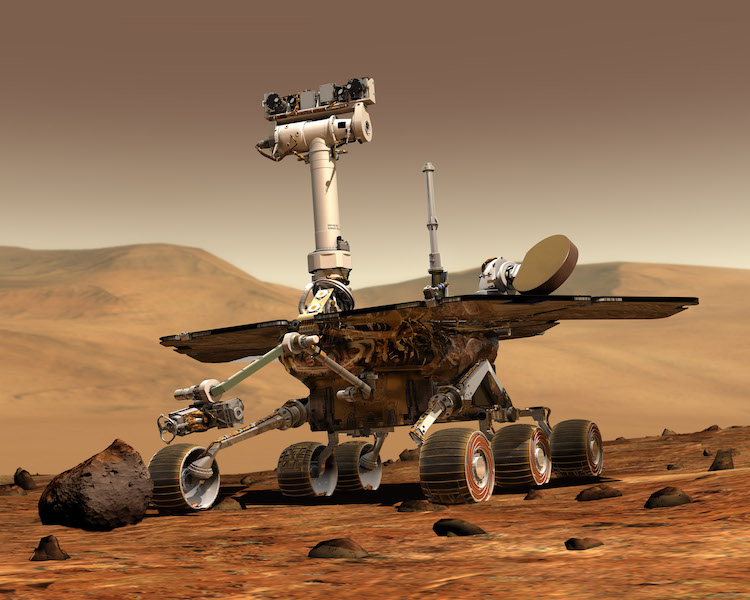 An artist's concept portrays a NASA Mars Exploration Rover on the surface of Mars. Rovers Opportunity and Spirit were launched a few weeks apart in 2003 and landed in January 2004 at two sites on Mars. Each rover was built with the mobility and toolkit to function as a robotic geologist.

On January 20, 2001, George Walker Bush took the oath of office to become the 43rd president of the United States, succeeding William Jefferson Clinton and giving the Republican Party control of the White House after two terms of Democratic rule. The determination of a winner had been delayed for five weeks after Election Day in November 2000[±èº´µÎ1] while the candidates litigated over ballot recounts. The election contest – and the five-week legal battle over Florida’s 25 decisive electoral votes – came to a conclusion December 12, when the U.S. Supreme Court voted to end the recounts in Florida.

The theme of President Bush’s inaugural address was national unity. He called on Americans to combine “a commitment to principle with a concern for civility.” The sentiment was in keeping with his calls for bipartisanship during the campaign and after the close election.

Bush listed a number of priorities for his administration, such as reforming the schools, cutting taxes, shoring up Social Security and Medicare, and strengthening the country’s defenses, arguing that the current era of relative peace and prosperity brought its own challenges. “We must show courage in a time of blessing, by confronting problems instead of passing them on to future generations,” he declared.

The terrorist attacks of September 11 in New York, the Washington, D.C., area, and Pennsylvania dramatically re-focused the nation’s priorities.

The world community confronted the threat posed by global terrorism with an unprecedented worldwide coalition. The North Atlantic Council invoked Article 5 of the North Atlantic Treaty, thereby considering the terrorist attacks on the United States to be an attack on all member states, and pledged any necessary assistance. Both the U.N. General Assembly and Security Council approved by acclamation resolutions condemning the terrorist attacks on the United States and calling on member states to cooperate to bring the “perpetrators, organizers, and sponsors of the outrages” to justice. Every tool of national and international power — diplomacy, law enforcement, intelligence, financial investigation, military action, and humanitarian aid — has been employed.

Administration officials attributed responsibility for the attack to Osama bin Laden and the Al Qaeda organization. A full-scale campaign was launched against Al Qaeda and its affiliates and support structures. A U.S. military operation, Operation Enduring Freedom, was launched in early October 2001 against the Taliban regime – which had harbored Al Qaeda since 1996 – and against Al Qaeda strongholds in Afghanistan. A total of 136 countries offered a range of military assistance to the United States. As a result of Operation Enduring Freedom, the Taliban was removed from power.

In his 2003 State of the Union messages, President Bush characterized Iraq as a grave potential threat to the United States because of its refusal to abandon its weapons of mass destruction (WMD) programs as required by U.N. Security Council resolutions and the potential for it to transfer WMD to terrorist groups. In September 2002, the President warned that unless Iraq fully disarmed in cooperation with United Nations weapons inspectors, the United States would lead a coalition to achieve that disarmament militarily. In November 2002, the United Nations Security Council had adopted Resolution 1441, giving Iraq a final opportunity to ¡°comply with its the disarmament obligations¡± or ¡°face serious consequences.¡± During January and February 2003, a U.S. military buildup in the Persian Gulf intensified and President Bush, other top U.S. officials, and British Prime Minister Tony Blair repeatedly indicated that Iraq had little time left to offer full cooperation with U.N. weapons inspectors. Leaders of France, Germany, Russia, and China urged that the inspections process be allowed more time. On March 19, 2003, the United States launched ¡°Operation Iraqi Freedom,¡± a war effort to disarm Iraq and change its regime. The regime fell on April 9, 2003.

Combatting terrorism and the proliferation of weapons of mass destruction continues to be the major overriding imperative of the Bush Administration. Other major international initiatives and priorities include the Middle East Roadmap to Peace, the Millennium Challenge Account for developing countries and an emergency global HIV/AIDS program. On domestic issues, President Bush is committed to job creation and economic growth, health care and welfare reform, improving the educational system, and the development of a comprehensive energy plan to promote energy efficiency and conservation.