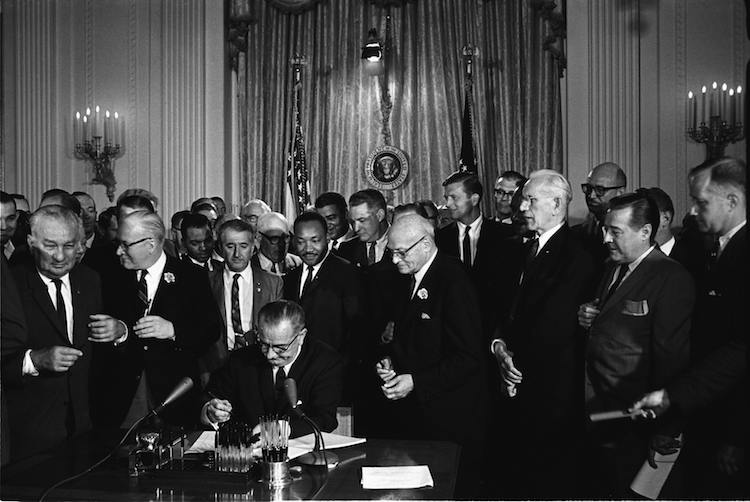 Lyndon B. Johnson signs the historic Civil Rights Act of 1964

On April 25, 1945, representatives of 50 nations met in San Francisco to erect the framework of the United Nations. The U.S. Senate promptly ratified the U.N. Charter by an 89 to 2 vote. This action confirmed the end of the spirit of isolationism as a dominating element in American foreign policy. The Cold War was the most important political issue of the early postwar period. It grew out of longstanding disagreements between the Soviet Union and the United States. During World War II, the two countries found themselves allied, but at the war”s end, antagonisms surfaced again. Germany became a divided country, with a western zone under joint British, French, and American occupation and an eastern zone under Soviet occupation. In the spring of 1948, the Soviets sealed off West Berlin. The western powers responded with a massive airlift of food and fuel until the Soviets lifted the blockade in May 1949.

Containment of the Soviet Union became American policy in the postwar years and was the focus of the Truman Doctrine. Containment also called for extensive economic aid to assist the recovery of war-torn Europe. This program was known as the “Marshall Plan.” In April 1949, the North Atlantic Treaty Organization (NATO) was formed. Arms control became an integral component of U.S. national security policy. The United States also responded to challenges in Asia and the Korean War (1950 – 1953) brought armed conflict between the United States and China.

The Cold War had a profound effect on domestic affairs. Foreign events and espionage scandals contributed to strong anti-communist feelings. The most vigorous anti-communist warrior was Senator Joseph McCarthy. Relying on extensive press and television coverage, he charged top-level officials with treachery. But finally his public support waned and the Senate condemned him for his conduct.

In the decade and a half after World War II, the United States experienced phenomenal economic growth. The war brought the return of prosperity, and the United States consolidated its position as the world”s richest country. A sense of uniformity pervaded American society. Conformity was common, as young and old alike followed group norms rather than striking out on their own. At the same time, African Americans became increasingly restive. The civil rights movement began. In the late 1950s, the Supreme Court ruled the segregation of schools and buses to be unconstitutional. The Civil Rights Act of 1957 authorized federal intervention in cases where blacks were denied the chance to vote.