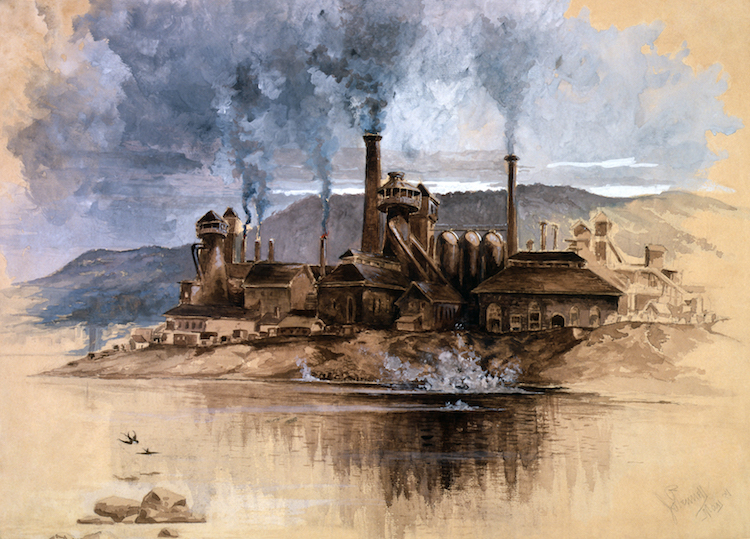 At the end of the war, the South was a region devastated by war, burdened by debt and demoralized by racial warfare. As time passed, it became obvious that the problems of the South were not being solved by radical reconstruction, harsh laws and continuing rancor against former Confederates. In May 1872, Congress passed a general Amnesty Act, restoring full political rights to all but about 500 Confederate sympathizers.

Between the Civil War and the First World War the United States of America was transformed from a rural republic to an urban state. The country became a leading industrial power. Great factories and steel mills, flourishing cities and vast agricultural holdings marked the land. The first transcontinental railroad was completed in 1869, and by 1900, the United States had more rail mileage than all of Europe. The petroleum, steel and textile industries prospered. An electrical industry flourished as Americans made use of a series of inventions: the telephone, the light bulb, the phonograph.

The South, however, remained even thirty years after the Civil War largely poor, overwhelmingly agrarian and economically dependent. Its society enforced a rigid social segregation of blacks from whites, and tolerated recurrent racial violence.

By 1890 the frontier had disappeared. Government policy had been to move the Indians beyond the reach of the white frontier but the reservations had become smaller and more crowded and tribal treaty rights were often abused. The last decades of the 19th century were a period of imperial expansion for the United States, as it extended its influence, and at times its domain, over widely scattered areas in the Atlantic and Pacific Oceans and into Central America. In 1867, America purchased Alaska from Russia. Within a few years after the end of the Spanish-American War in 1898, the United States was exercising control or influence over islands in the Caribbean Sea, the mid-Pacific and close to the Asian mainland. When the Hawaiian royal government announced its intention to end foreign influence in 1893, American businessmen joined with influential Hawaiians to install a new government, and in July 1898 the islands were annexed.

With economic growth and affluence came corresponding problems. Nationwide, businesses came to dominate whole industries, either independently or in combination with others. Trusts – huge combinations of corporations – tried to establish monopoly control over some industries. The Sherman Antitrust Act of 1890 banned trusts, mergers, and business agreements “in restraint of trade.” Industrialization also brought with it the rise of organized labor. Working conditions were often poor and even in good times wages were low, hours long and working conditions hazardous. Periodic economic crises swept the nation, further eroding industrial wages and producing high levels of unemployment. At the same time, the technological improvements, which added so much to the nation’s productivity, continually reduced the demand for skilled labor. Yet the unskilled labor pool was constantly growing, as unprecedented numbers of immigrants — 18 million between 1880 and 1910 — entered the country. Cities grew so quickly they could not properly house or govern their growing populations.