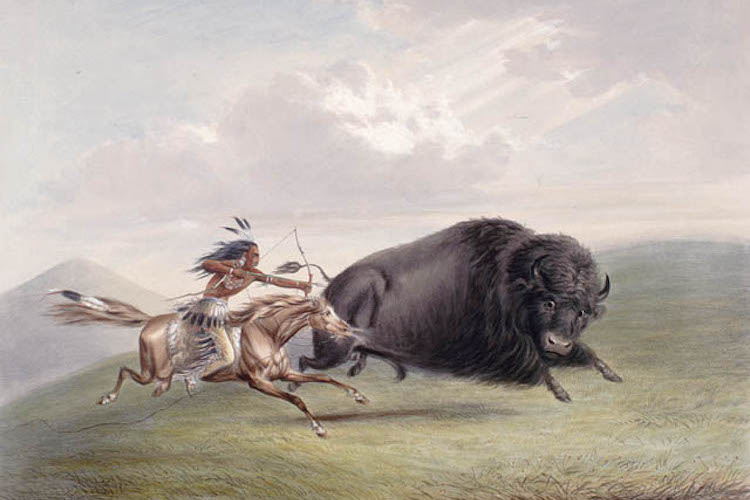 The first people to reach North America were Asian hunters and nomads. Following game along the Siberian coast, they crossed the land bridge that connected the two continents about 30,000 to 34,000 years ago. Once in Alaska, it took these first North Americans, the ancestors of Native American tribes, thousands of years to work their way south to what is now the United States. Evidence of early life in North America has been found at sites throughout North and South America, indicating that life was probably already well established in much of the Western Hemisphere by some time prior to 10,000 B.C.

Around that time the mammoth began to die out and the bison took its place as a principal source of food and hides for these early North Americans. Gradually, foraging and the first attempts at agriculture appeared. Indians in what is now central Mexico led the way, cultivating corn, squash and beans, perhaps as early as 8,000 B.C. Slowly, this knowledge spread northward. By 3,000 B.C., a primitive type of corn was being grown in the river valleys of New Mexico and Arizona. Then the first signs of irrigation began to appear, and by 300 B.C., signs of early village life.

Indian customs and culture at the time were extraordinarily diverse, as could be expected, given the expanse of the land and the many different environments to which they had adapted. Some generalizations, however, are possible. By all accounts, Indian society in North America was closely tied to the land. Most tribes, particularly in the wooded eastern region and the Midwest, combined aspects of hunting, gathering and the cultivation of maize and other products for their food supplies. Indian life was essentially clan-oriented and communal, with children allowed more freedom and tolerance than was the European custom of the day. There was a good deal of trade among various groups.

The first Europeans to reach North America were Icelandic Vikings, led by Leif Ericson, in about the year 1000. In 1492, the Italian navigator Christopher Columbus, acting on behalf of the Spanish crown, sailed west from Europe and landed on one of the Bahama Islands. Columbus never saw the mainland United States, but the first explorations of the continental United States were launched from the Spanish possessions that he helped establish. Within 40 years, Spanish adventurers had carved out a huge empire in Central and South America. In 1513 a group of men under Juan Ponce de Leon landed on the Florida coast near the present city of St. Augustine.

While the Spanish were pushing up from the south, the northern portion of the present-day United States was slowly being revealed through the journeys of men such as Giovanni da Verrazano. A Florentine who sailed for the French, Verrazano made landfall in North Carolina in 1524, then sailed north along the Atlantic coast past what is now New York harbor.