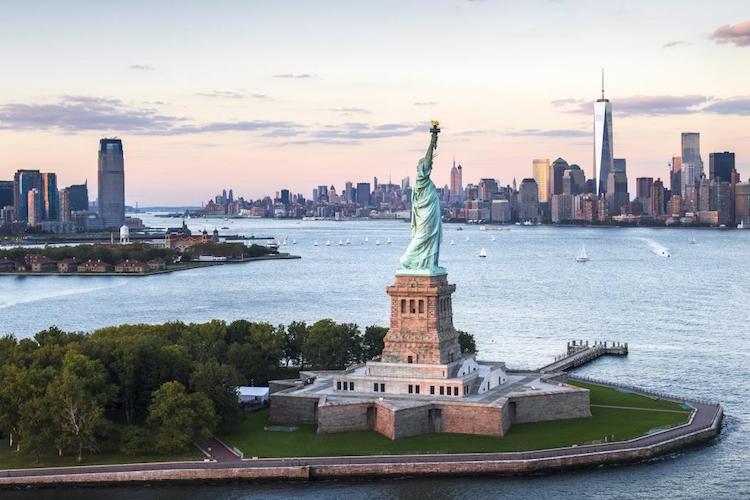 The Statue of Liberty National Monument officially celebrated her 100th birthday on October 28, 1986.

The Statue of Liberty National Monument officially celebrated her 100th birthday on October 28, 1986. The people of France gave the Statue to the people of the United States over one hundred years ago in recognition of the friendship established during the American Revolution. Over the years, the Statue of Liberty has grown to include freedom and democracy as well as this international friendship.

Sculptor Frederic Auguste Bartholdi was commissioned to design a sculpture with the year 1876 in mind for completion, to commemorate the centennial of the American Declaration of Independence. The Statue was a joint effort between America and France and it was agreed upon that the American people were to build the pedestal, and the French people were responsible for the Statue and its assembly here in the United States. However, lack of funds was a problem on both sides of the Atlantic Ocean. In France, public fees, various forms of entertainment, and a lottery were among the methods used to raise funds. In the United States, benefit theatrical events, art exhibitions, auctions and prize fights assisted in providing needed funds. Meanwhile in France, Bartholdi required the assistance of an engineer to address structural issues associated with designing such as colossal copper sculpture. Alexandre Gustave Eiffel (designer of the Eiffel Tower) was commissioned to design the massive iron pylon and secondary skeletal framework which allows the Statue’s copper skin to move independently yet stand upright. Back in America, fund raising for the pedestal was going particularly slowly, so Joseph Pulitzer (noted for the Pulitzer Prize) opened up the editorial pages of his newspaper, “The World” to support the fund raising effort. Pulitzer used his newspaper to criticize both the rich who had failed to finance the pedestal construction and the middle class who were content to rely upon the wealthy to provide the funds. Pulitzer’s campaign of harsh criticism was successful in motivating the people of America to donate.

Financing for the pedestal was completed in August 1885, and pedestal construction was finished in April of 1886. The Statue was completed in France in July, 1884 and arrived in New York Harbor in June of 1885 on board the French frigate “Isere” which transported the Statue of Liberty from France to the United States. In transit, the Statue was reduced to 350 individual pieces and packed in 214 crates. The Statue was re-assembled on her new pedestal in four months time. On October 28th 1886, the dedication of the Statue of Liberty took place in front of thousands of spectators. She was a centennial gift ten years late.

On October 28th, 1886, President Grover Cleveland accepted the Statue on behalf of the United States and said in part: “We will not forget that Liberty has here made her home; nor shall her chosen altar be neglected.”