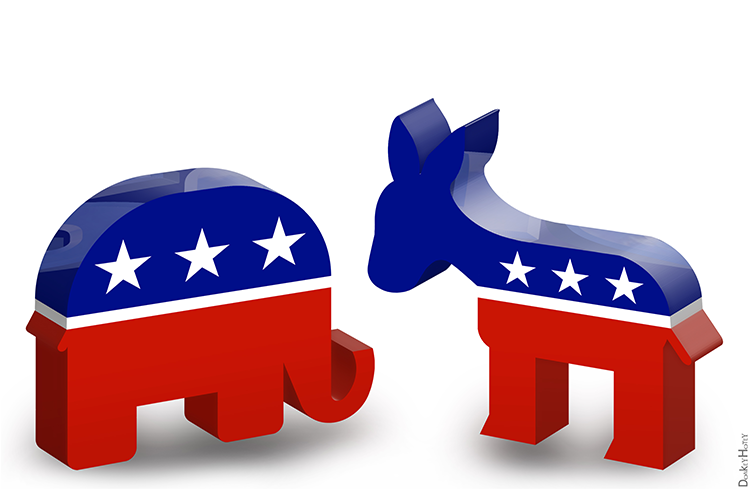 Republican Elephant & Democratic Donkey - 3D Icons. These are not an official Democratic or Republican Party logos or icons. These images have been created for general use to illustrate editorial content about politics in America.

Today, there are two major political parties in the United States, the Democratic and the Republican.

The Democratic Party evolved from the party of Thomas Jefferson, formed before 1800. The Republican Party was established in the 1850s by Abraham Lincoln and others who opposed the expansion of slavery.

The Democratic Party is considered to be the more liberal party, and the Republican, the more conservative. Democrats generally believe that government has an obligation to provide social and economic programs for those who need them. Republicans are not necessarily opposed to such programs but believe they are too costly to taxpayers. Republicans put more emphasis on encouraging private enterprise in the belief that a strong private sector makes citizens less dependent on government.

Both major parties have supporters among a wide variety of Americans and embrace a wide range of political views. Americans do not have to join a political party to vote or to be a candidate for public office, but running for office without the money and campaign workers a party can provide is difficult.

After the 2004 presidential, Runoff, and General elections, just two of the 435 representatives in the U.S. House of Representatives were independents. It is the two major parties that organize and dominate government at both the national and state levels.