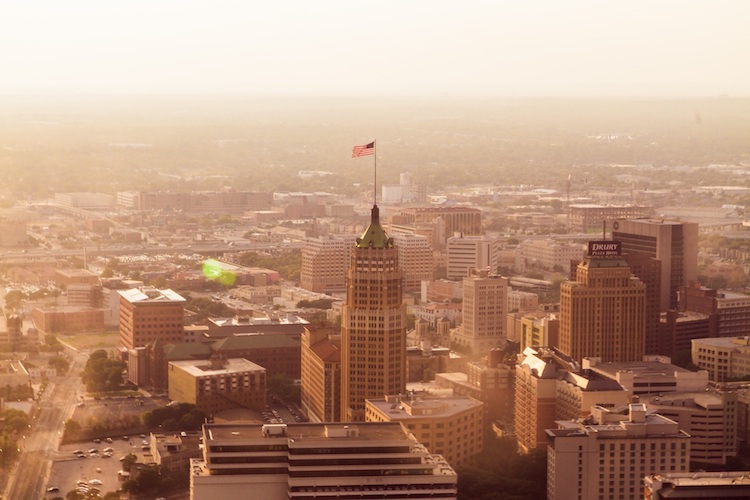 American architecture is exceptionally complex, both in the multiple traditions from which it has drawn and in the variations of style. When the first European settlers arrived, Native Americans had already developed their own architectural traditions, for example the pueblo, hogan, longhouse, and tipi.

18th century architecture was designed along the rule of reason and practical planning. Different styles developed, influenced by the traditions of the immigrants and local conditions. In the mid-19th century, a Romantic spirit was expressed in many competing stylistic revivals, for example the Greek Revival with symmetrical pillared forms and the Gothic Revival with pointed, crocketed and asymmetrical forms.

The 19th century witnessed an extraordinary rate of urbanization. Despite the absence of any form of public regulation, distinct districts appeared, including elegant blocks of row houses, multifamily tenements and lodging houses. Business districts were transformed by an architectural innovation: the skyscraper. Beginning in the 1880s, architects and engineers in Chicago and New York began to experiment with new framing systems to achieve greater height. The skyscraper is America’s unmistakable contribution to architecture. The first skyscraper went up in Chicago in 1884. The designer of the most graceful early towers, Louis Sullivan was America’ s first great modern architect. His most talented student was Frank Lloyd Wright.

In the 1930s, European architects who emigrated to the United States before World War II influenced the development of an austere, functional approach, supposedly anonymous and oblivious to the traditions of place. It came to be called the International Style. Perhaps most influential were Ludwig Mies van der Rohe and Walter Gropius, both former directors of Germany’s famous design school, the Bauhaus. Buildings in their geometric style have been both praised and criticized.

In the postwar period, architectural pluralism became more pronounced than ever. As skyscrapers reached new heights, they displayed an extraordinary variety of colors and ornamental motifs. The reuse of historical buildings became a common spectacle. A new generation of architects now feels free to incorporate both old and new elements in their buildings.