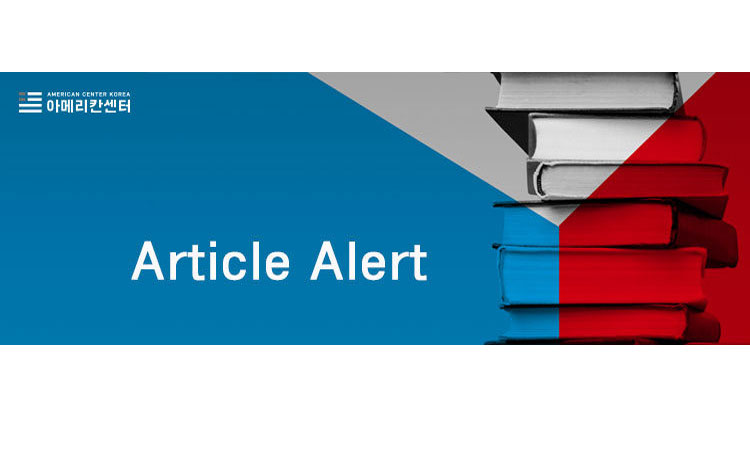 The Article Alert is produced monthly by the American Center Korea, Public Diplomacy Section, U.S. Embassy Seoul. It offers abstracts of current articles, mostly from U.S. publications and by U.S. authors, highlighting significant issues in three major areas of international or U.S. domestic affairs. Views expressed in the articles are those of authors and do not necessarily reflect U.S. government policies.

The views expressed in the articles are those of the authors and do not necessarily reflect U.S. government policies.

IN08 – SOUTH KOREA: BACKGROUND AND U.S. RELATIONS (Congressional Research Service, August 1, 2019, various pages) 대한민국: 배경과 미국과의 관계에 관한 미의회조사국 보고서 (Contact ACK for Print Copy)
South Korea (officially the Republic of Korea, or ROK) is one of the United States’ most important strategic and economic partners in Asia. The U.S.-ROK Mutual Defense Treaty, signed in 1953 at the end of the Korean War, commits the United States to help South Korea defend itself, particularly from North Korea (officially the Democratic People’s Republic of Korea, or DPRK).

IN09 – Campbell, Kurt M.; Sullivan, Jake. COMPETITION WITHOUT CATASTROPHE: HOW AMERICA CAN BOTH CHALLENGE AND COEXIST WITH CHINA (Foreign Affairs, August 1, 2019, various pages) 재앙없는 경쟁: 미국과 중국의 도전과 공존 (Contact ACK for Print Copy)
The United States is in the midst of the most consequential rethinking of its foreign policy since the end of the Cold War. Although Washington remains bitterly divided on most issues, there is a growing consensus that the era of engagement with China has come to an unceremonious close. The debate now is over what comes next.

IN11 – Victor, Cha. FINDING A WAY OUT FROM THE JAPAN-KOREA CRISIS (Center for Strategic and International Studies, August 6, 2019, various pages) 한-일 관계 위기에서 탈출할 해법 찾기
I have two observations about diplomacy.  First, diplomacy is not about achieving all of your goals on every single occasion. You may want to win it all in a business negotiation, but if that is not achievable, then you accept a partial success, rather than walk away. In other words, you satisfice rather than optimize. Sometimes, satisficing means achieving only 50 percent of what you want, but pragmatically speaking, this is still better than nothing.

EC07 – Maizland, Lindsay. THE JAPAN-SOUTH KOREA TRADE DISPUTE: WHAT TO KNOW (Council on Foreign Relations, August 5, 2019, various pages) 한–일 무역 분쟁: 알아야 할 사항
Japan and South Korea are showing no signs of backing down from a trade dispute that could disrupt global production of smartphones, computers, and other electronics. The recent flare-up, rooted in historical disagreements, marks a deterioration in the relationship between two important U.S. allies.

EC08 – Segal, Stephanie. UNLUCKY NUMBER SEVEN: THE EXCHANGE RATE AND THE STATE OF U.S.-CHINA TALKS (Center for Strategic and International Studies, August 6, 2019, various pages) 불행한 숫자7: 환율과 미-중 대화 상태
On Monday, the Chinese renminbi (RMB) fell below the psychologically significant level of seven RMB to the U.S. dollar for the first time in more than a decade. The decision by China to allow a weaker RMB, followed by the U.S. designation of China as a currency manipulator, are the latest and most immediately consequential actions in the U.S.-China trade war to date. Actions on currency have ushered in a new stage in the U.S.-China trade war that risks spinning out of control absent a concerted effort to get negotiations back on track.

US06 – Hughes, Adam; Wojcik, Stefan. 10 FACTS ABOUT AMERICANS AND TWITTER (Pew Research Center, August 2, 2019) 미국인과 트위터에 관한 10가지 사실
Today, millions of Americans use Twitter to break and comment on news, disseminate official pronouncements, organize campaigns and protests or just let their friends know what’s on their minds. Here are 10 facts about Americans and Twitter, based on recent Pew Research Center surveys and other studies.

US08 – Kreps, Sarah; McCain, Miles. NOT YOUR FATHER’S BOTS: AI IS MAKING FAKE NEWS LOOK REAL (Foreign Affairs, August 2, 2019, various pages) 인공지능이 가짜 뉴스를 진짜 뉴스처럼 만든다. (Contact ACK for Print Copy)
Disinformation is a serious problem. Synthetic disinformation—written not by humans but by computers—might emerge as an even bigger one. We conducted a study to see whether synthetic disinformation could generate convincing news stories about complex foreign policy issues. Our results were clear: it can.

US09 – Kissinger, Henry A.; Schmidt, Eric; Huttenlocher, Daniel. THE METAMORPHOSIS (The Atlantic, August 1, 2019, various pages) 변형 (Contact ACK for Print Copy)
AI will bring many wonders. It may also destabilize everything from nuclear détente to human friendships. We need to think much harder about how to adapt.