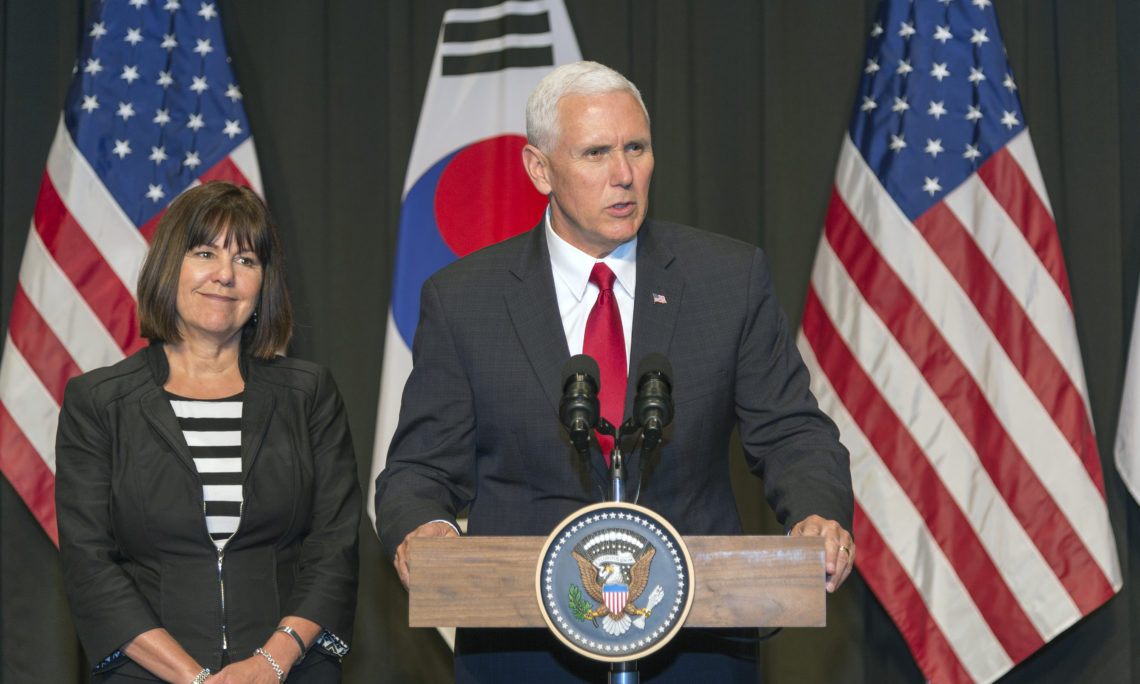 On April 16, my wife, Suzuko, and I had the honor of welcoming U.S. Vice President Mike Pence and his family to the Republic of Korea (ROK).  His first trip to Asia since taking office in January, the Vice President came here to deliver a clear message to the South Korean people:  “The United States of America is with you 100 percent.”

After landing in Seoul, the Vice President and the Second Lady, Karen Pence, together with their daughters Audrey and Charlotte, visited the Seoul National Cemetery to participate in a wreath laying ceremony.  Afterwards, they joined U.S. and ROK troops for an Easter church service, followed by an Easter fellowship dinner.

The next day the Vice President visited the Demilitarized Zone (DMZ) and emphasized that the U.S-ROK alliance is the linchpin of peace and security on the Korean Peninsula, and throughout the Asia Pacific region.  Vice President Pence then had a meeting and then a working lunch with Acting President Hwang Kyo-Ahn, followed by another meeting with National Assembly Speaker Chung Sye-Kyun.

Vice President Pence’s trip to South Korea was not only full of meaningful professional activities, it was also a deeply personal occasion.  His late father served in the U.S. Army during the Korean War and was awarded the Bronze Star 64 years ago.  The Vice President displays the medal, and a photograph of his late father receiving it, in his White House office.  On his way to the DMZ, the Vice President saw the battlefields where his father fought, and it was a very moving experience for him.

As you can see, the relationship between our two nations is not bound by time, and crosses multiple generations.  The Vice President’s story and his connection to Korea symbolize our shared history, a history not only involving countless individuals, but interweaving whole generations of Americans and Koreans together.  As the Vice President and his daughters stood at the DMZ that day, they were the second and third generations of the Pence family who came to Korea to express their dedication to the alliance.

The Vice President’s family history of service also made me think about my own family.  Like the Vice President’s father, my father served in the U.S. military.  He was a Vietnam veteran who was stationed in Okinawa after the war and, later on in his military career, also served in Korea.  My father participated in the now discontinued Team Spirit Exercise, a joint military training exercise between the United States and South Korea.  After coming to Seoul on my first diplomatic assignment in the 1990s, I remember feeling proud that, like my father before me, I was working to strengthen U.S.-ROK relations.  Today, my son Alex, who’s still in high school, is actively involved with the Yeomyung School, a school dedicated to helping North Korean refugees make a successful transition into South Korean society.  So, when I talk about generations of Americans being dedicated to our alliance, it’s a connection I feel on a very personal level.

The U.S.-ROK relationship is an unshakable commitment built on the contributions of generations of Americans.  To say it in the words of our Vice President, the “United States of America [will] stand together in the months and years ahead with the people of South Korea to both preserve their freedom, and ensure the objective of a denuclearized Korean Peninsula.”