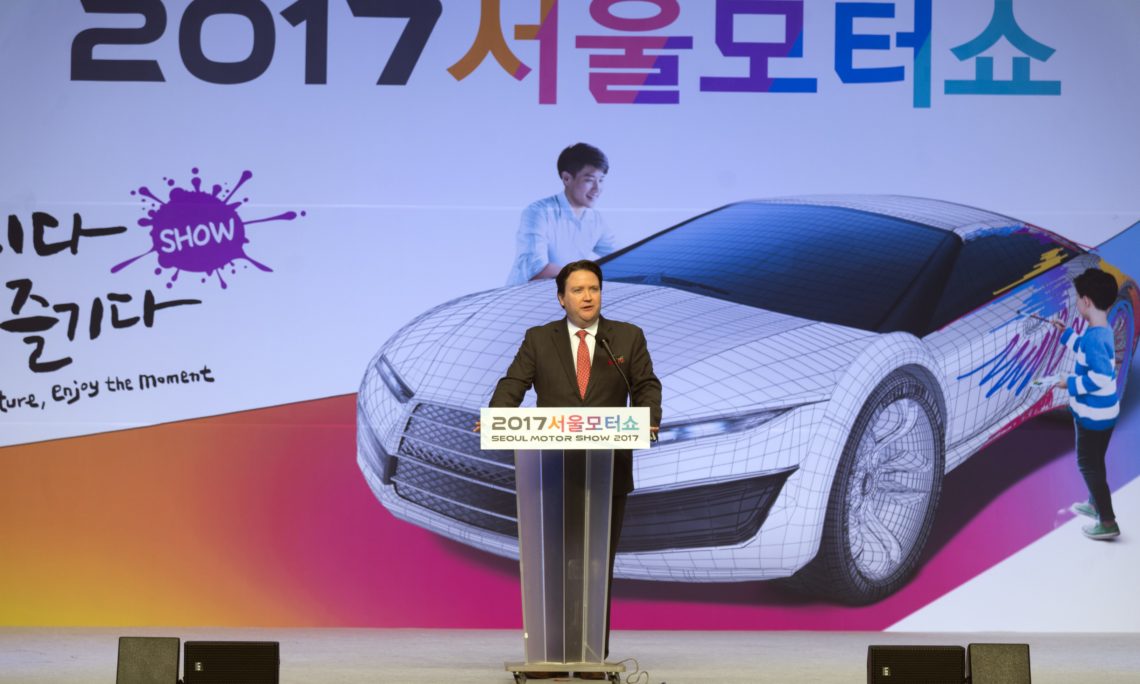 The biennial Seoul Motor Show opened its 2017 exhibition on March 30th.  I was fortunate enough to be invited, give a few opening remarks, and tour the show floor.  The number of amazing new vehicle models (including prototypes) on display and crowds of excited spectators highlighted the love of automobiles that both the United States and Korea share.  The United States and South Korea are the second- and fifth-largest motor vehicle manufacturers in the world, respectively, and both countries have shaped the industry as a whole.  Companies like Ford, Chrysler, and General Motors were instrumental in building up both the technology and the economy of the United States in the early 1900’s.  In that same vein, companies like KIA, Hyundai, and Daewoo helped build the automotive industry in Korea and set the bar for design, technology, and performance that they continue to push today.

Group photo at the Opening Ceremony

Inspecting one of the latest offerings from Lincoln

Hyundai exhibit on the show floor

Automobiles and automotive design are not only interesting, but they also underscore the deep economic ties that the United States and Korea share.  Many people may not know this, but Hyundai Motor Company and Kia Motors both have manufacturing plants in the United States.  Additionally, General Motors (GM) has multiple manufacturing plants in South Korea, and Ford Motor Company partnered with both Hyundai and KIA to produce cars in Korea back in the 60’s and 70’s.

These deep levels of cooperation go beyond established auto manufacturers.  Just recently, Tesla, an American start-up company at the forefront of electric vehicle development, opened its first branch in South Korea.  Tesla automobiles are beautifully designed, environmentally friendly vehicles that turn heads and are changing the way people think about transportation.  There is significant consumer interest in their offerings back home, and strong demand has caused more established U.S. automobile manufacturers, like Chevrolet, to begin offering similar types of vehicles.  Koreans are just as excited about Tesla’s vehicles as Americans are and, if the long list of Korean pre-orders is any indication, we are poised to enter a whole new era of electric vehicles together.

Testing out the interior of the Chevrolet Bolt

The deep appreciation for automobiles that we share, and the mutually beneficial investment that’s flourished between our two countries as a result, have served as essential building blocks of our successful economic partnership.  Automobiles have impacted both of our economies in extremely positive ways and they have also provided opportunities for Koreans and Americans to cooperate and learn more about each other.  I am proud to have been able to take part in celebrating this relationship between the United States and Korea, and it certainly was a pleasure to see the culmination of all of the hard work that goes into producing these exciting and innovative vehicles.