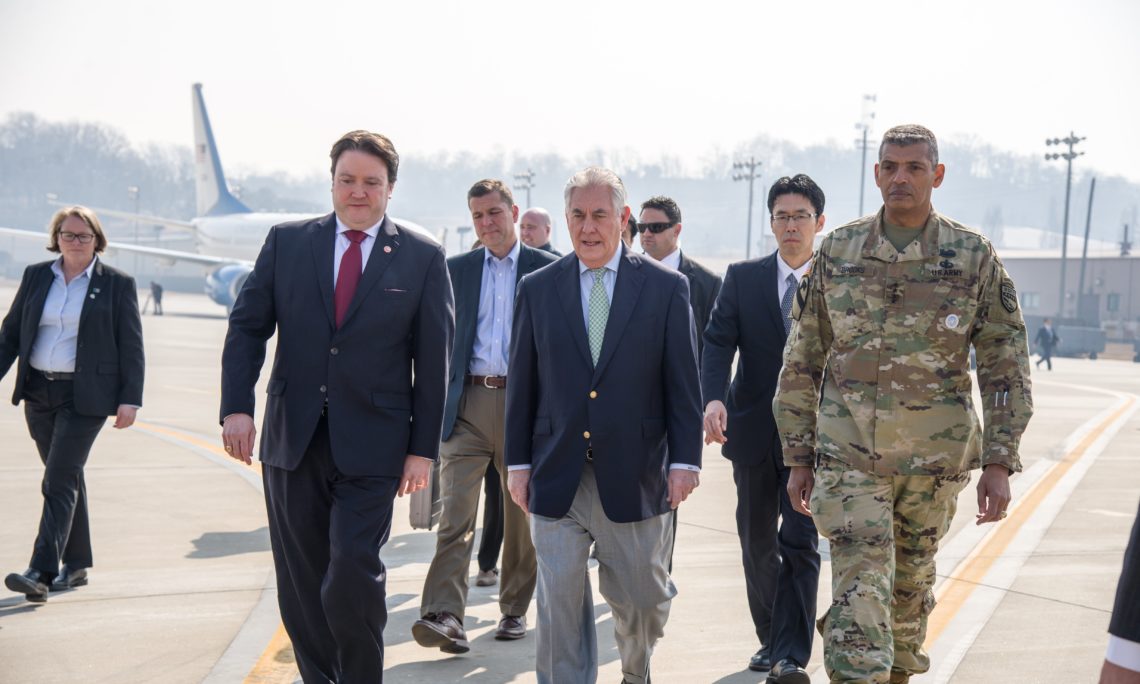 On March 17, I had the pleasure of welcoming U.S. Secretary of State Rex Tillerson to the Republic of Korea (ROK).  By visiting so early in his tenure, the Secretary underscored the importance of the U.S.-ROK Alliance and the strong foundation on which it rests.

The Secretary’s schedule in the ROK was tightly packed, and started with a visit to the Demilitarized Zone.  He was accompanied by U.S. Forces Korea Commander General Vincent Brooks, and received a briefing on the security situation.  At an informal luncheon, the Secretary thanked ROK and U.S. soldiers for their service.  He then toured the Joint Security Area (JSA) on the North Korean border.  While at the JSA, Secretary Tillerson stated that North Korea continued to pose a grave and escalating global threat.  He indicated that the United States was exploring a new range of diplomatic, security, and economic measures in order to secure peace, and called on all nations to demand that the North Korean leadership choose a better path and a different future for its people.

Afterwards, the Secretary traveled to Seoul for a meeting with Acting President Hwang Kyo-ahn to discuss our robust bilateral cooperation in many fields.  Secretary Tillerson used the opportunity to emphasize the United States’ unwavering commitment to the U.S.-ROK Alliance.  He stressed the importance of our historic people-to-people ties, our vibrant economic cooperation, and the strength of our alliance in response to the growing threat from North Korea.  Furthermore, the Secretary acknowledged the importance of our alliance as a pillar of peace and security on the Korean Peninsula and across the Asia-Pacific Region.

The final event on the Secretary’s itinerary was a meeting with Foreign Minister Yun Byung-se.  Our governments regularly engage in high-level consultations about peace and security in East Asia, and this meeting was an opportunity for the Secretary to address and express concern about China’s reaction to the deployment of a Terminal High Altitude Area Defense (THAAD) battery in South Korea. While Secretary Tillerson acknowledged China’s right to oppose the decision, he made it clear that the United States considered China’s economic retaliation against South Korea inappropriate and troubling.  He asked China to refrain from such actions and urged China to address the threat that had made THAAD deployment necessary, namely, the escalating threat from North Korea.

Secretary Tillerson very much appreciated the warm hospitality he received during his visit to South Korea.  The alliance between the United States and the Republic of Korea has remained strong for more than 60 years, and Secretary Tillerson reinforced that our ironclad commitment to this partnership will endure and strengthen further under the Trump Administration.