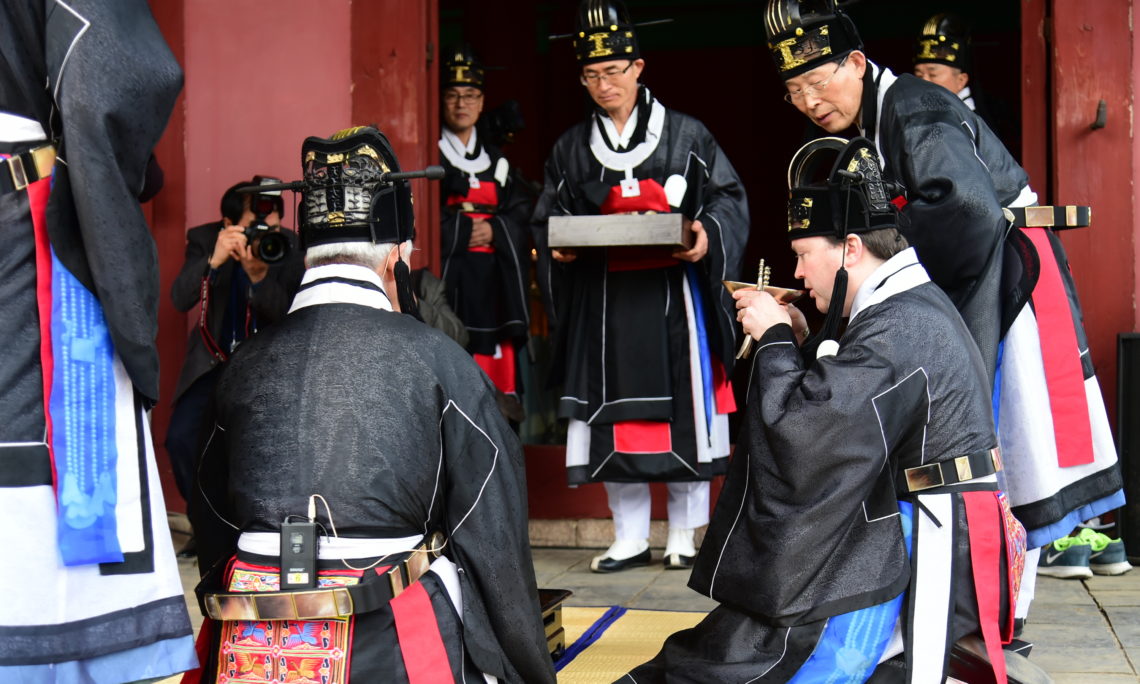 Several weeks ago I received a beautiful invitation, written in Korean calligraphy on traditional paper.  It asked me to participate as a Grand Chief Master in the Seokjeon Daeje ceremony at the Munmyo Shrine in Sungkyunkwan.  I was truly humbled by the invitation and even more so when I found out I would be the first foreigner in over 600 years to participate in the ceremony.

Seokjeon Daeje, a ceremonial rite held twice annually (spring and autumn), is the greatest commemorative rite of all Confucian ceremonies.  As I’m sure many of you know, Confucius was a Chinese philosopher, teacher, and political figure.  He devised a revered set of philosophies, which later became known as “Confucianism,” that emphasized personal and governmental morality, correctness of social relationships, and justice.  Even though Confucianism is mainly viewed as a system of social and ethical philosophy rather than a religion, there are many aspects that rely on belief in ancestral spirits.

The entire ceremony was quite remarkable, from the beautiful music to the amazing dancers; but what stood out the most was the history behind everything that was happening around me.  The Seojeon Daeje rite consists of many different parts, every detail of it steeped in history.  During the offerings of tribute and sacrificial food, or jeonpyerye, I was captivated by the carefully choreographed steps of multiple bands of dancers and musicians, all wearing traditional dress, the thick plumes of incense, and all of the other elements that were combined into one deeply impressive cultural experience.

It was a tremendous honor to have been invited to participate in this great Korean tradition, and to show respect for this enduring symbol of Korea’s rich history and culture.