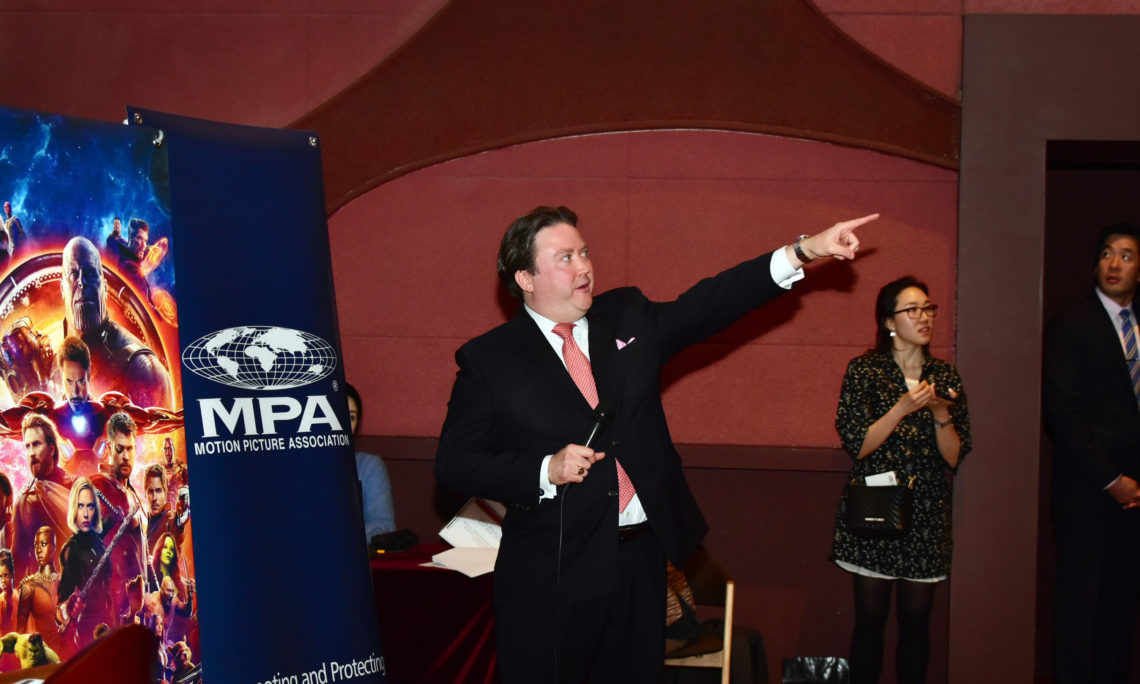 To observe World Intellectual Property Day and highlight the problem of piracy, the Motion Picture Association of America, through its global offices, works with U.S. embassies to host screenings of popular films likely to be copied and sold illegally.  That’s why U.S. Embassy Seoul partnered with the Motion Picture Association of Korea to host a special screening of Avengers:  Infinity War.  This year’s World Intellectual Property Day campaign celebrated the brilliance, ingenuity, curiosity, and courage of the women who are driving change in the world and shaping our common future.  As such, we invited university students who are majoring in women’s studies, international studies, or film to the screening.  Additionally, 20 Avengers fans, selected through an Embassy social media contest, were also present.  Before we kicked off the film screening, I emceed a fun intellectual property quiz, which I hope increased awareness about the subject among the participants.

Even if you are not interested in superheroes or science fiction, you probably would have found Infinity War to be quite a spectacle.  The movie is full of exhilarating action sequences and amazing special effects, which is why even moviegoers who haven’t seen the other Avengers movies or who aren’t otherwise familiar with the Marvel Universe can enjoy it.  To be honest, I might be a little biased, as I’ve been a fan of anything superhero-related since my childhood.  My grandmother used to pick up comic books for me periodically when she went to the supermarket.  I remember anxiously waiting for her car to pull into the driveway after a day of shopping, since it meant that I might possibly be getting a new issue.  When she brought a new comic home for me, I would pore over its pages and wonder at all the adventures of epic proportions contained within.  The comics instilled in me a love of reading, and I am very grateful to my grandmother for that!

More than simply adventure stories about people in brightly colored costumes, comic books have been frequently used as vehicles to convey deeper meanings through thought-provoking plot devices and storylines.  I’m glad to see this tradition is being kept alive by many of the Marvel films.  Infinity War’s story was fairly straightforward, but the Black Panther movie that was released earlier this year, for example, was multi-layered.  The film chronicles the adventures of a super-powered king of a hidden African nation during his quest to prevent opposition forces from using his kingdom’s vast resources to wage war on the entire world.  The movie’s terrific script presents a compelling concept of a technologically advanced African civilization that challenges multiple stereotypes about Africans and women in science, engineering, and math.

I’m happy to see such important issues being addressed in a compelling manner, but especially because Marvel films reach a worldwide audience.  I hope Marvel continues to produce popular movies that contain deeper meaning, present opportunities for worthwhile discussion, and spark the imagination of people of all ages.