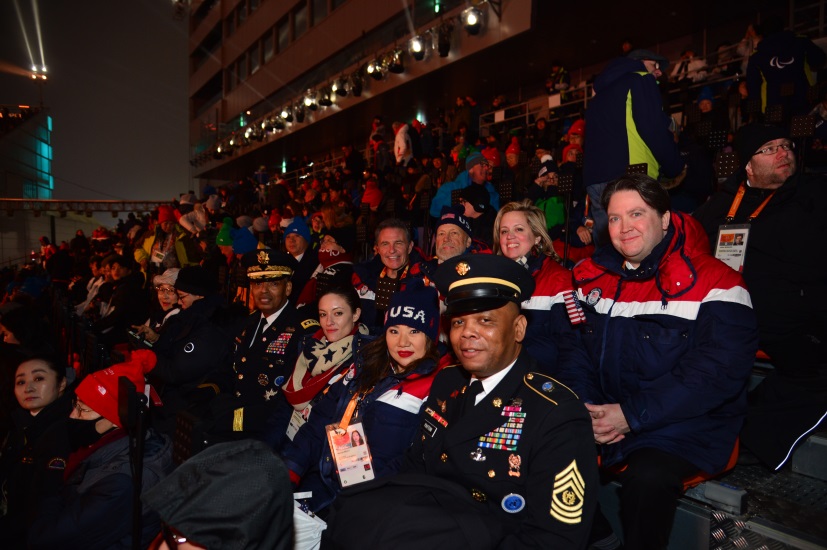 I recently had the opportunity to attend multiple events at the PyeongChang 2018 Paralympic Winter Games, the biggest winter Paralympic games in history.  Watching the competitions was as exhilarating as it was meaningful.

The PyeongChang Paralympic Winter Games really celebrated the concepts of coexistence and passion.  Becoming a Paralympian requires a lot of hard work and dedication, from learning how to function in daily life with a disability, to becoming an international competitor in an Olympic sport.  Paralympic athletes have to overcome obstacles on their journey that most of us never even think about, which is why I have such tremendous respect for the courage and commitment these amazing athletes display.

Among the many Team USA Paralympians, 18 athletes are U.S. veterans:  eight from the Marines, seven from the Army, two from the Navy, and one from the Air Force.  The story of each and every one of our veterans is inspiring.  They volunteered to defend our nation and were called upon to make great sacrifices for the country’s greater good.  These heroes then persevered through significant challenges to rise to the top of their respective sports and represent our nation at the Paralympic Winter Games.  I’d like to share a few of the personal stories of these Paralympians with you, just to underscore how amazing they truly are.

Dan Cnossen graduated from the Naval Academy in 2002 and served until 2009.  While platoon commander for SEAL Team One in Afghanistan, he stepped on an IED and lost both of his legs above the knee.  He was subsequently awarded a Purple Heart and a Bronze Star with Valor from the Secretary of the Navy for his service in combat.  Dan rehabilitated at the Bethesda National Naval Medical Center and later at Walter Reed National Military Center, where he learned to walk again with prosthetic legs.  Dan is now a Nordic skier and a Paralympic champion, having won multiple medals, including a gold medal in Biathlon at PyeongChang.

After the 9/11 terrorist attacks, Andy Soule wanted to give back to his country, so he joined the Army.  While in Afghanistan, an IED detonated next to his Humvee, which resulted in a double leg amputation.  He started skiing, despite having no previous experience with the sport, after attending a cross-country recruitment camp in 2005.  He is now a three-time Paralympian and just won a gold medal in cross-country skiing at PyeongChang.

These are just a few stories of the veterans who participated in the Paralympics, but all of them are an inspiration.  I want to take this opportunity to thank the Team USA veterans for their continued service, Team USA for their wonderful performance at the Paralympics, and South Korea for making the 2018 Paralympics possible!  As we turn our eyes in anticipation toward the next Olympic and Paralympic Games, let’s not forget how incredible all of the amazing people who took part in PyeongChang 2018 were.