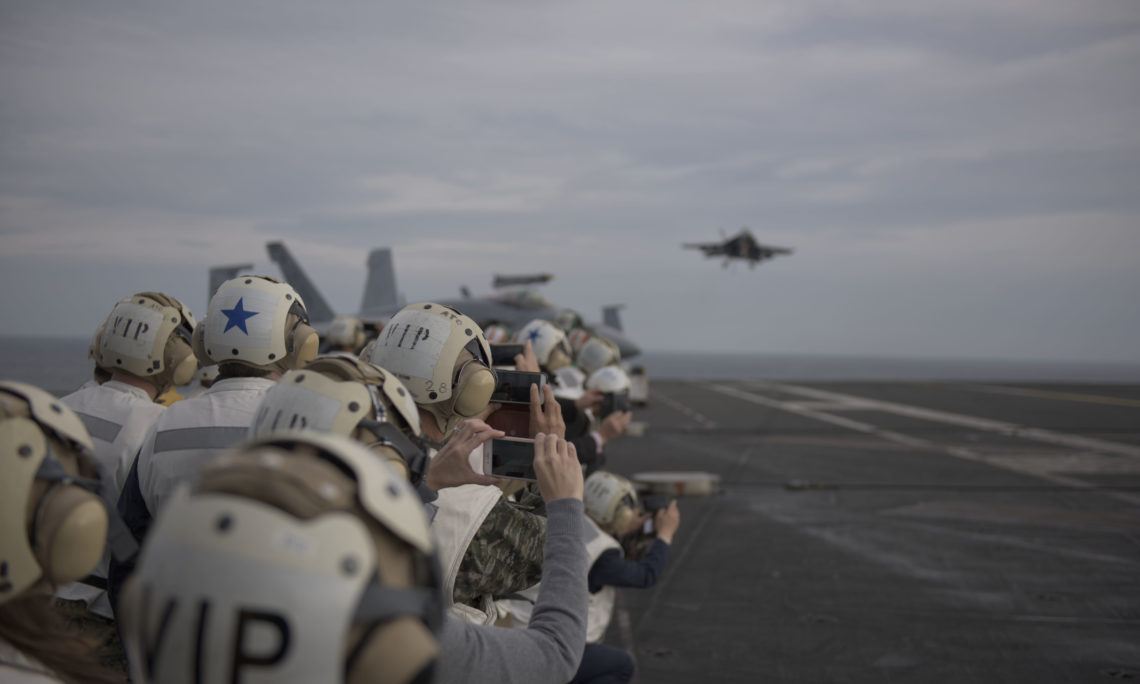 Recently, the United States sent three of the world’s largest aircraft carriers – the USS Ronald Reagan (CVN 76), USS Nimitz (CVN 68), and USS Theodore Roosevelt (CVN 71) – to the Western Pacific to carry out a three Carrier Strike Force exercise.  This type of exercise, which included ships from the ROK Navy, serves to increase military readiness while demonstrating the U.S. Pacific Fleet’s unique force projection capabilities.  This is yet another example of our nation’s resolve to honor our treaty commitments and maintain stability and security in East Asia.

I had the good fortune to visit one of the aircraft carriers participating in the exercise.  The USS Ronald Reagan, named after former U.S. President Ronald W. Reagan and christened on March 4, 2001, arrived off the coast of the Republic of Korea a few weeks ago.  I flew out to learn more about the ship and its hardworking and dedicated crew.

I was immediately struck by the size of the aircraft carrier, at more than 333 meters long and about 20 stories tall, with a crew of approximately 6,000 serving onboard.  Did you know that each day 18,000 meals are served aboard the USS Ronald Reagan?  It truly is a city on water.

Most of the male and female crew members are between 18 and 24 years-old and do an amazing job serving our great nation, often spending many months at sea and away from their loved ones.  The recent tragic crash of a C-2 cargo plane bound for the USS Ronald Reagan reminds us that these men and women put themselves in harm’s way everyday – even during times of peace – to protect the lives and security of others.  My thoughts and prayers are with the families and friends of Lt. Steven Combs, Aviation Boatswain’s Mate Airman Matthew Chialastri, and Aviation Ordnance Airman Apprentice Bryan Grosso, who were lost in that crash.

The risks inherent in protecting our great nation, our alliance partners, and promoting stability in East Asia are great, but necessary.  Credible U.S. military power and our strong U.S.-ROK alliance underpin our diplomacy and are essential to achieving a diplomatic path to denuclearizing North Korea.  Our alliances, including our alliance with the Republic of Korea, have been the cornerstone of the regional security architecture that has promoted peace, stability, and economic progress over the last 70 years.  The men and women of the U.S. Navy will continue to enable us to uphold our security commitments for decades to come.

These three Carrier Strike Force exercises and all other joint U.S. military exercises with Allies like the Republic of Korea, Japan, and Australia, demonstrate that we will remain strong and vigilant in the face of North Korea’s continued nuclear weapons and ballistic missiles programs.  Diplomacy backed by our strong Alliance deterrence posture remains our preferred means for persuading North Korea to abandon its nuclear aspirations and rejoin the international community as a responsible nation.