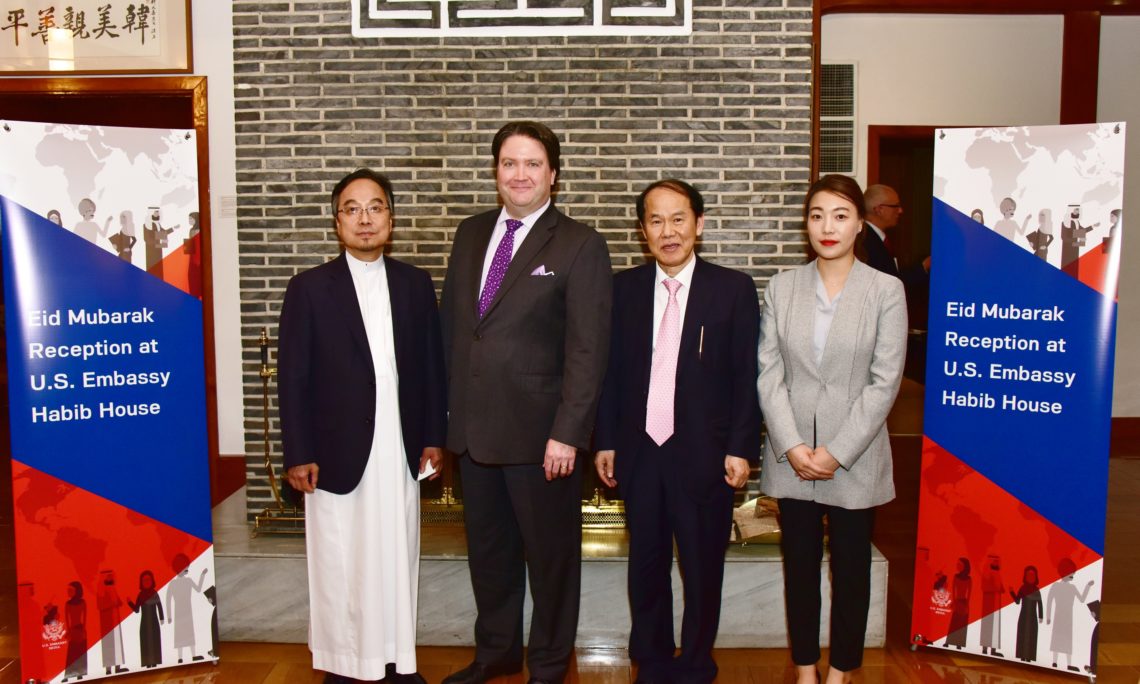 The United States prides itself on its diversity. For this reason, the U.S. State Department strives to promote the values of tolerance and inclusion. As South Korea’s birth rate falls and immigration numbers rise, the Republic of Korea is becoming a more and more diverse country. This is happening on many levels – culturally, ethnically, religiously, and linguistically. From our perspective, this is a good thing and an opportunity for the Republic of Korea to avail itself of some of the benefits that a pluralistic society offers.

On my recent trip to Ansan (see previous blog post here), I had the chance to meet some of the international students attending Hanyang University’s Education Research Industry Cluster (ERICA) Campus. Hanyang University welcomes international students and has a large multicultural community. The ERICA campus staff respects and accommodates cultural differences, such as providing a separate halal kitchen and prayer rooms for Muslim students.

Hanyang University ERICA attracts students from around the world

During my trip I met eight bright students from Pakistan, Uzbekistan, and Kazakhstan, with areas of studies ranging from system engineering to Korean literature.  These ambitious students all had different stories about why they came to Korea, and what they wanted to do after graduation.  The common thread they share is that they all have big dreams and are using wisely their opportunities in Korea.  Any one of them could decide to stay in Korea to start a business or begin a career and make a life for themselves.  Some of the most successful U.S. businesses were founded by international students who decided to start their business in the United States.  The same thing could happen here.

On August 24, the U.S. Embassy hosted a “Youth Interfaith Dialogue” at the Chief of Mission’s Residence, also known as Habib House, named after Philip Habib, a prominent Lebanese-American diplomat who was a former U.S. Ambassador to the Republic of Korea.  I thought the topic was especially relevant for Korea where cultural diversity is a challenge and demographics are changing quickly.

The program was organized in partnership with two organizations:  the Muslim Student Association of Korea and the Korean Conference of Religions for Peace.  Three student panelists from the Christian, Buddhist, and Muslim faiths served as panelists.  The students said that many misunderstandings of different religions originate from films and the media.  All agreed that, in order to address prejudice, they should learn about other religions by having a diverse group of friends, traveling abroad, and reading books.  The discussion became animated when students started talking about the discrimination they faced while job hunting.  Young Muslim women, in particular, noted that wearing a hijab during job interviews impeded their abilities to secure job offers from prospective Korean employers.

As in Korea, we are fortunate to have religious diversity in the United States.  Islam is an important part of our culture.  There are over three million Muslims living in the United States with families that stretch back generations.  So in honor of the Islamic holiday Eid-al-Adha, the Embassy hosted an Eid-al-Adha reception at Habib House, the same venue where we held the Youth Interfaith Dialogue.  It was a great pleasure to invite guests from the diplomatic corps in Korea, Imam A. Rahman Lee Ju-Hwa, President Choi Hamid Young-kil of the Korea Muslim Federation, the Korean Conference of Religion for Peace (KCRP), and reporters covering the Middle East.

My Embassy team carefully arranged the event by catering halal food from a delicious local Moroccan restaurant.  We also provided a separate space at Habib House for guests to pray in.  The evening reflected the importance of bringing diverse communities together through kindness and understanding for one another.