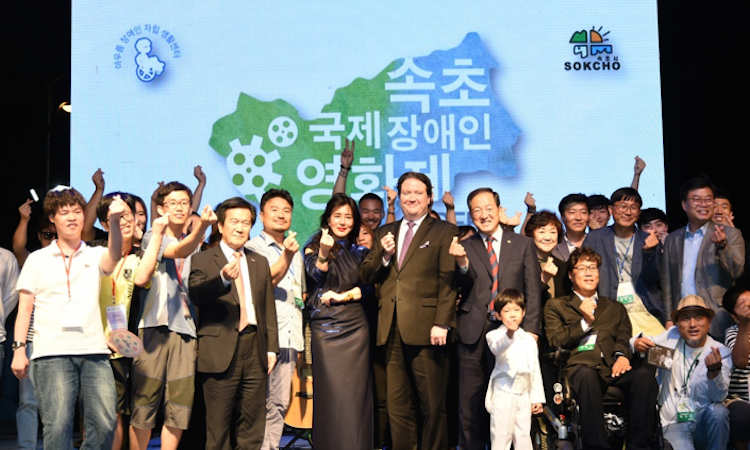 This year the U.S. Embassy was a proud sponsor of the 2017 Sokcho International Disability Film Festival.  Established in 2014, the festival started as a small local event, providing a venue for people with disabilities to learn how to make movies and showcase their own films.

This year’s festival featured the U.S. documentary Right Footed, which tells the story of 29 year-old Jessica Cox who became a disability rights activist and leader.  Despite a life full of physical challenges due to her being born without arms, Jessica earned a college degree, achieved two Taekwondo black belts, learned to drive a car and, incredibly, became the first person in the world to pilot a plane using only her feet.

Right Footed exemplifies how one individual’s life can have a profound impact on others.  It is also a story of perseverance and grit, and how all of us can breakthrough perceived limitations to achieve great things.  Although Jessica managed to overcome her personal challenges and excel, not everybody with disabilities is similarly situated and sometimes require support from others in order to pursue their dreams.  That’s why the U.S. Embassy is committed to raising awareness, promoting a more inclusive society, and increasing opportunities for people with disabilities.

Providing people with opportunities to harness their abilities benefits us all.  Their contributions drive progress in the arts, society, politics, and economics.  As a nation of immigrants, one of our greatest strengths is our diversity and the benefits that different perspectives bring.

Did you know that my family’s roots can be traced back to immigrants from other countries?  My mother’s family immigrated to the United States from Mexico in the 1930s.  My father’s family came from Germany and Ireland.  Thanks in part to the spirit of inclusiveness in the United States, they were able to build a life together that allowed me to pursue a diplomatic career.

In addition to supporting people with disabilities, we at the Embassy also think it is important to call attention to the importance of integrating foreign-born and multicultural people into society.  Last month I visited Haemil School, an alternative school for children of mixed ethnic backgrounds, which was established in 2013 by famed Korean R&B diva Kim In-soon (also known as Insooni).  The school is doing an amazing job helping multicultural students, but they still need a lot of support.  We were happy to contribute to the school’s operations by donating books and other educational materials for its students.

On a later date, I traveled to Ansan City, a community with a large and growing foreign-born population, to discuss the local government’s innovative ways of supporting multicultural residents and international students.  The discussions were insightful and I learned a lot about all of the wonderful things that Ansan and its citizens are doing to promote tolerance and diversity.

Whatever the case may be – whether someone has a disability, comes from a different culture, or is of a different ethnicity – inclusiveness and diversity in society are important, and we strongly believe that we are all more similar than we are different.