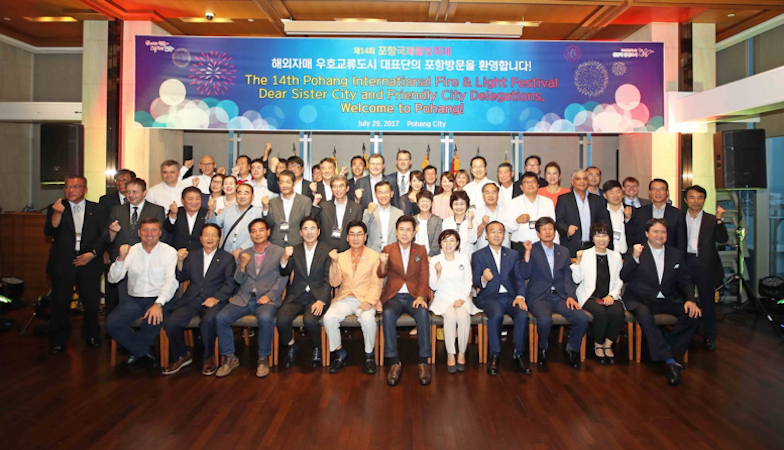 As most of you know, Americans celebrate our Independence Day with fireworks.  The skies of the United States are set ablaze on the Fourth of July with some of the best fireworks displays (often choreographed to music) in the world.  Growing up, I always looked forward to watching the bright, colorful fireworks every summer, and they still never ceased to amaze me.  When I first saw the fireworks in Pohang, my thoughts drifted back to my youth and the many Independence Day celebrations I enjoyed.  The quality and beauty of the display that I experience in Pohang ranked among the best that I have ever seen.

Since 2014, Pohang has used their fireworks festival to host a cooperative dialogue for Northeast Asian nations, inviting sister city delegations from Russia, China, Japan, and Mongolia to participate.  The city of Pohang and Mayor Lee Kang-deok’s efforts to build bridges and support this type of city-to-city grassroots diplomacy are impressive and commendable.  NGOs, citizen groups, and municipalities all have a role to play in diplomacy and strengthening people-to-people ties.  It is wonderful to see Mayor Lee taking a lead role and laying the groundwork for nations to engage in cooperative dialogue at the regional and municipal levels.

These types of connections are reminiscent of the sister city relationships that exist between municipalities in the United States and South Korea.  The concept of “sister city” was first conceived of in 1947, a few years after the Second World War ended.  Over the years, this new type of city-to-city relationship helped foster understanding between different cultures, encourage trade, and increase tourism.  Did you know that Washington D.C. has 12 official sister cities worldwide, including Seoul?  Seoul has three sister cities in the United States.  They are San Francisco, Washington D.C., and Honolulu.  Pohang also has a sister city relationship with Pittsburg, California.

These relationships show how cultures and societies connect to one another not only at the national level, but at the local level as well.  They can create networks that champion peace and prosperity by fostering bonds between people from different communities around the world.  I hope that the sister city relationships between the United States and South Korea continue to thrive.