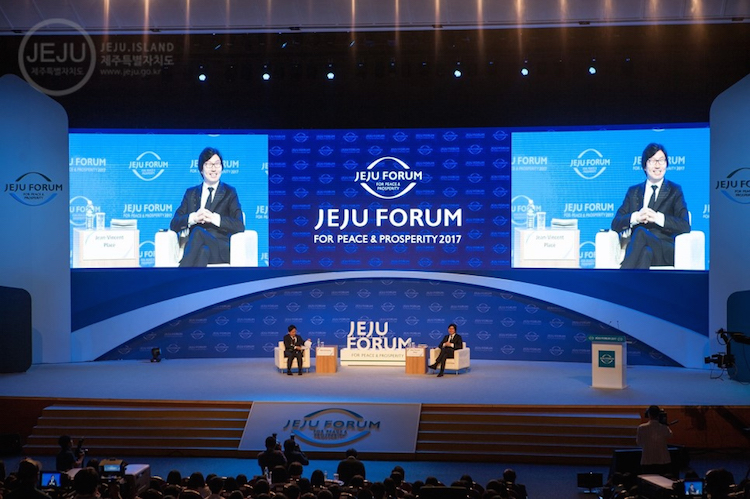 The Jeju Forum for Peace and Prosperity is a regional multilateral dialogue for promoting peace and prosperity in Asia.  Launched in 2001, the annual Forum is hosted by the Government of Jeju Special Self-Governing Province, with support from the Republic of Korea’s Ministry of Foreign Affairs, and draws thousands of participants from all over the world.

I had the pleasure of attending and representing the United Sates at this year’s Forum (May 31 – June 2), and it truly was an honor to talk with so many leaders from the fields of diplomacy, security, business, and academia about a future vision for Asia.

I also participated as a panelist in the Ambassadors’ Roundtable Session, along with Ambassadors from the United Kingdom, Australia, India, and Japan.  The topic of the roundtable was “Sharing a Common Vision for Asia’s Future,” and we each discussed important agendas in the region, from the global economy and regional security to long-term cooperation and cultural exchanges.  Representing the United States, I emphasized that:

These discussions made clear to the imperative of working together to create an environment for stable, sustainable growth.

A good friend and colleague, Anna Fifield, The Washington Post’s Bureau Chief in Tokyo, brought up an interesting point about the lack of women on the panel.  It is worth noting that there are many highly qualified women working as Ambassadors and in other various positions who would certainly enrich discussions at the Forum with their wisdom, insights, and perspectives.

Former U.S. Vice President and Nobel Peace Prize Laureate Al Gore was the key speaker at the Forum.  He gave a moving presentation on climate change during a session titled, “Challenge and Opportunity of Climate Change: Is a Better Growth Possible?”  His speech was filled with powerful messages on the effects of global warming, such as the increase in natural disasters, flooding, and droughts across the world.  He also discussed some of the social and political effects of climate change.  Despite the number of global issues challenging the world today, Mr. Gore conveyed a sense of optimism and hope.  His presentation left a lasting impact on the audience.

As the Forum was well organized and facilitated a great deal of wonderful discussions, I look forward to seeing and attending future Forums with a more balanced panel for peace and prosperity in Asia.