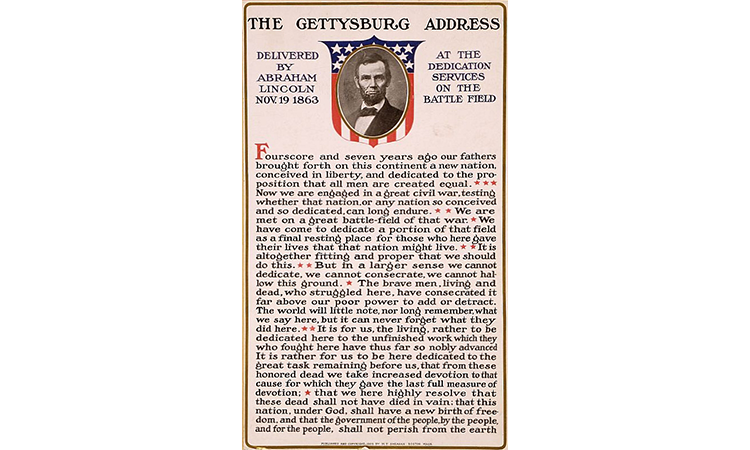 The great Battle of Gettysburg, fought for three days in July 1863 through the streets and around the countryside of the little Pennsylvania town, was the turning point of the Civil War. Congress decided to make a national cemetery of the battlefield where so many gallant men had fallen. President Lincoln came from Washington to dedicate that cemetery. His dedication speech of November 19, 1863, short as it is, is one of the most eloquent statements of the democratic faith ever made.

Few documents in the growth of American democracy are as well known or as beloved as the prose poem Abraham Lincoln delivered at the dedication of the military cemetery in Gettysburg, Pennsylvania.
In June 1863 Confederate forces under Robert E. Lee moved north in an effort to win a dramatic victory that would reverse the South’s declining fortunes. On July 1-3, Lee’s forces fought the Union army under the command of George C. Meade, and before the fighting ended, the two sides suffered more than 45,000 casualties. Lee, having lost more than a third of his men, retreated, and the Battle of Gettysburg is considered a turning point in the American Civil War.

The dedication of the battlefield and cemetery thus provided Lincoln with an opportunity for a major address, but he disappointed many of his supporters when he gave this short talk. In fact, many of the spectators did not even know the president had started speaking when he finished. But in this talk Lincoln managed, as the great orator Edward Everett (the main speaker at the dedication) understood, to combine all the elements of the battle and the dedication into a unified whole.

These men fought, and died, for the Union. Now their work was done; they had made the supreme sacrifice, and it was up to those living to carry on the task. But Lincoln’s rhetoric, as subsequent generations discovered, did far more than memorialize the dead; it transformed the meaning of the Constitution for those still alive. Lincoln read into the Constitution a promise of equality, the “proposition that all men are created equal.” That, of course, had been a premise of the Declaration of Independence, but everyone understood that the drafters of that document had not intended to include slaves and other “inferior” peoples in their definition. Now the country had fought a great war to test that notion, and the lives of the men who died at Gettysburg could be hallowed only one way — if the nation, finally, lived up to the proposition that all of its people, regardless of race, were in fact equal. The power of the idea still informs American democratic thought.

Four score and seven years ago our fathers brought forth on this continent, a new nation, conceived in Liberty, and dedicated to the proposition that all men are created equal.

Now we are engaged in a great civil war, testing whether that nation, or any nation so conceived and so dedicated, can long endure. We are met on a great battle-field of that war. We have come to dedicate a portion of that field, as a final resting place for those who here gave their lives that the nation might live. It is altogether fitting and proper that we should do this.

But, in a larger sense, we can not dedicate — we can not consecrate — we can not hallow — this ground. The brave men, living and dead, who struggled here, have consecrated it, far above our poor power to add or detract. The world will little note, nor long remember what we say here, but it can never forget what they did here. It is for us the living, rather, to be dedicated here to the unfinished work which they who fought here have thus far so nobly advanced. It is rather for us to be here dedicated to the great task remaining before us — that from these honored dead we take increased devotion to that cause for which they gave the last full measure of devotion — that we here highly resolve that these dead shall not have died in vain — that this nation, under God, shall have a new birth of freedom — and that government of the people, by the people, for the people, shall not perish from the earth.