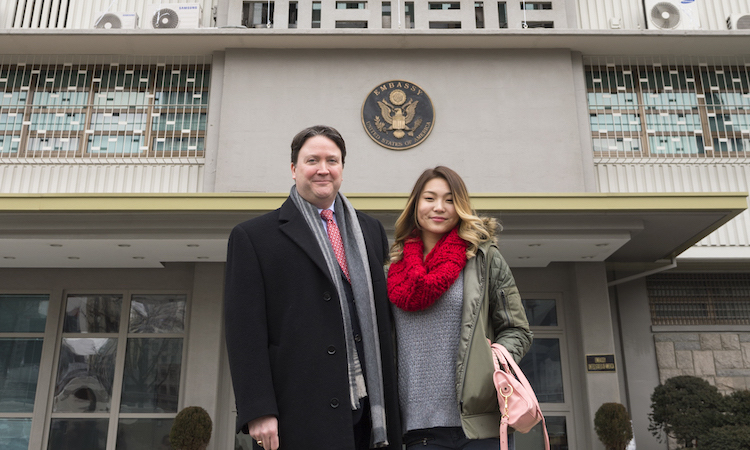 Greetings, everyone.  Welcome to my new blog.  I’ve been in Seoul for the past two years serving as the U.S. Embassy’s Deputy Chief of Mission and just recently began my tenure as Chargé d’Affaires ad interim.  The U.S.-Korea alliance has grown tremendously strong over the past decade and it is an honor to represent the United States as we take steps to bring our two nations even closer together.


One great opportunity on the horizon for deepening the U.S.-Korea relationship is the upcoming 2018 PyeongChang Olympic and Paralympic Games.   Our two countries’ shared passion for sports offers a fantastic way to bridge cultural barriers, overcome language differences, and achieve new understandings about one another.  The Olympics will undoubtedly be a great opportunity to showcase South Korea and all that it has to offer to the world.  Americans are already getting excited about the games and that’s why we decided to install an Olympics-themed banner across the U.S. Embassy’s façade last week.  The banner was designed to express our enthusiasm and unwavering support for Korea’s efforts to host the games.

I also recently had the pleasure of welcoming American snowboarder Chloe Kim to South Korea as an official U.S. State Department Sports Envoy.  Chloe is one of the top snowboarders in the world, having already won several gold medals at the 2016 X-Games and the 2016 Winter Youth Olympic Games, and she is expected to be a tough competitor in PyeongChang next February as well.  When we first met, I was immediately impressed by her outgoing personality, her dedication to snowboarding, and the mature way in which she viewed her success in the sport.  She spent her time in Seoul connecting with other young people and sharing with them the things in life that had helped her to succeed.  She explained that it took a lot of self-determination and hard work, but also conveyed that her close-knit family was an additional source of strength that allowed her to persevere in difficult times. Chloe is a second-generation Korean-American from California.  The story of Chloe’s family is also the story of America.  Her parents immigrated to California from South Korea.  Despite the struggles they faced adjusting to life in a new country, her parents managed to accomplish great things, and now their daughter will compete and represent the United States in one of the most prestigious sporting events in the world.

As is the case with almost all of my fellow Americans, my family’s roots can also be traced back to immigrants from other countries.  In the 1930s, my mother’s family emigrated to the United States from Mexico.  The United States is a nation of immigrants that was built by immigrants.

Photo of my maternal great-grandparents, taken in Chihuahua, Mexico

Even today, in almost every sector, we can easily see how inclusiveness and diversity continue to contribute to our country’s success.  This includes the tremendous contributions of Korean immigrants as well, and you do not have to look any further than Chloe and her family to see a very powerful example.  I think the United States and Korea both can be very proud of Chloe, and I am confident that she will achieve wonderful things in PyeongChang next year.