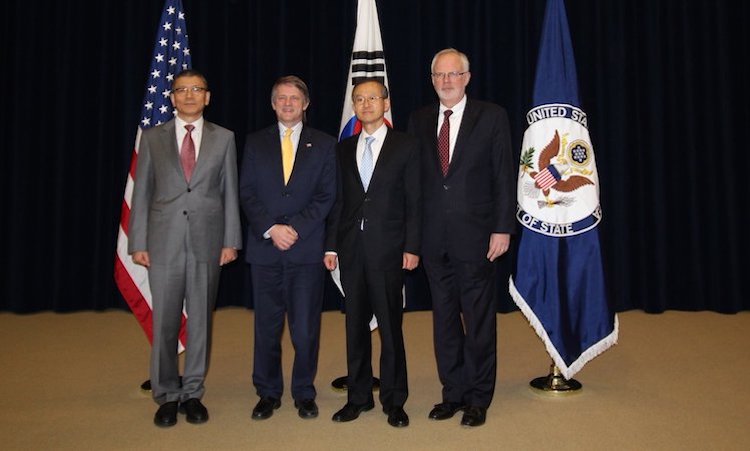 The text of the following statement was issued jointly by the Governments of the Republic of Korea and the United States.

The United States of America and the Republic of Korea (ROK) held the inaugural meeting of the Extended Deterrence Strategy and Consultation Group (EDSCG) in Washington, D.C., on December 20, 2016.

The EDSCG, established by the U.S.-ROK Foreign and Defense Ministers’ (2+2) Meeting on October 19, 2016, was led by vice ministerial-level officials from the ROK and the United States: ROK First Vice Foreign Minister Lim, Sung-nam; ROK Deputy Minister for Defense Policy Yoo, Jeh-seung; U.S. Acting Under Secretary of State for Arms Control and International Security Thomas Countryman; and Performing the Duties of Principal Deputy Under Secretary for Policy of the U.S. Department of Defense David Shear. Officials from both sides held comprehensive and in-depth discussions on strategic and policy issues regarding extended deterrence against North Korea, including how to better leverage the full breadth of national power – using diplomacy, information, military, and economic elements.

The United States reiterated its ironclad and unwavering commitment to draw on the full range of its military capabilities, including the nuclear umbrella, conventional strike, and missile defense, to provide extended deterrence for the ROK, and reaffirmed the longstanding U.S. policy that any attack on the United States or its allies will be defeated, and any use of nuclear weapons will be met with an effective and overwhelming response. In particular, the United States emphasized that it remains steadfast in meeting these enduring commitments and providing immediate support to the ROK.

In response to North Korea’s nuclear and missile threats, the officials reaffirmed the commitment of the United States to regularly deploy U.S. strategic assets for the defense of the ROK, as well as to enhance such measures and identify new or additional steps to strengthen deterrence. The officials also highlighted that the United States in 2016 demonstrated its commitment and resolve to the ROK by exercising extended deterrence through measures to enhance missile defense capabilities and through clear demonstrations of the U.S. nuclear triad, including multiple B-52 strategic bomber flights as well as visits by ROK officials to observe a Minuteman III Intercontinental Ballistic Missile (ICBM) launch (February 25) and board a nuclear-powered ballistic-missile submarine (SSBN) during its port visit to Guam (November 1).

Emphasizing the importance of the EDSCG as a high-level consultative mechanism and with a common understanding that such various measures to strengthen our combined defense are necessary to maintain effective deterrence of North Korea, the two sides expressed their intent to continue Alliance discussions through the EDSCG on how to best tailor our response to this evolving threat.

The ROK and the United States will discuss the time and venue of future meetings through diplomatic channels.