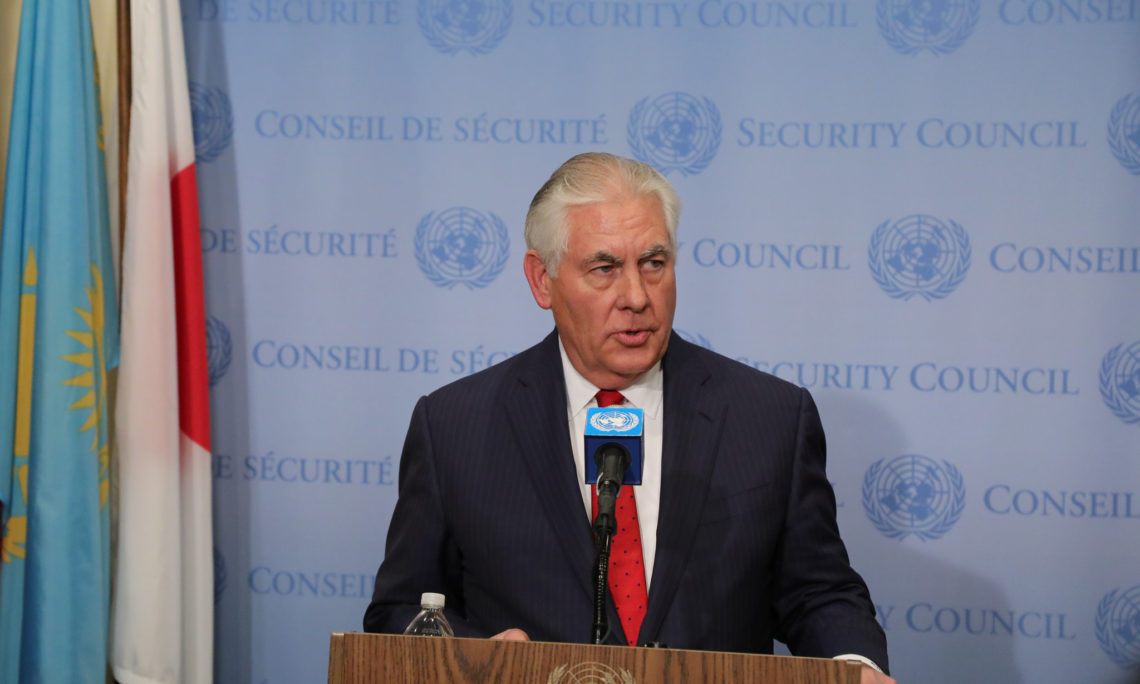 SECRETARY TILLERSON: Well, good afternoon, all. And I do want to, again, thank the Government of Japan for using their opportunity at the chair to convene today’s session on North Korea. Also appreciate Secretary Guterres’ comments and framing of the situation for us.

As was the case when President Trump took office, he identified North Korea as the greatest threat to U.S. national security, and regrettably, 11 months later, not much has changed. If anything, the situation perhaps has worsened. I think in the wake, in particular, of the most recent North Korean missile test – a very dangerous test, one which was noted by others — it was a real threat to civilization’s security, but again, demonstrates the total disregard North Korea has not just for the United States view on this, but for the view of the entire international community. And I think that was clearly expressed by the members of the Security Council today.

We simply cannot continue to accept the progress of North Korea’s program. We will maintain the pressure campaign and, in fact, we undertake efforts to increase the effectiveness of the pressure campaign both through a combination of the sanctions regime, full implementation and compliance of the sanctions regime, as well as unilateral actions on the part of many, many countries to send the message to North Korea through diplomatic steps as well as economic steps that we do not accept the pathway you’re on.

We hope that this pressure campaign will cause North Korea to alter its course, re-examine whether this truly is going to lead to a more secure – more security for the regime, and whether it is possible for them to even sustain an economy if they continue the path they’re on. We’re going to continue our diplomatic efforts. Those options remain open until other things may foreclose the diplomatic option. And with that, I’ll stop there and I think we can take a couple questions, perhaps.

QUESTION: Thank you, Secretary Tillerson. Michelle Nichols from Reuters. We have heard a lot from you this morning about North Korea. I’d like to ask you about Myanmar. As you’re aware, earlier this week, two Reuters journalists were arrested and their whereabouts are unknown. What is the U.S. Government doing to pressure Myanmar for their release? And is the U.S. considering further sanctions on Myanmar over human rights abuses?

SECRETARY TILLERSON: Well, our local representatives at the mission in Myanmar, at the embassy, are expressing our concerns over the detention of individuals, demanding their immediate release or information as to the circumstances around their disappearance. We are continuing to examine the circumstances around all of the events since the August attacks that have led to the enormous migration of people out of Myanmar, and have already identified one individual, and we are examining other possible individuals to hold responsible for targeted sanctions from the U.S.

SECRETARY TILLERSON: Well, a free press is vital to Myanmar’s transition and becoming a viable democracy, and we want Myanmar’s democracy to succeed. We know it is a process that they need to work through. This particular crisis is a real test of whether they are going to be able to affect a successful journey to democracy.

QUESTION: Mr. Secretary, you’ve previously said that a precondition to talks with North Korea is the regime agreeing to give up its nuclear and ballistic missile capabilities. On Tuesday, you said that wasn’t realistic. And today, you didn’t even mention the issue at all, despite what was in your prepared remarks. Does it remain a precondition for the United States and are you and President Trump on the same page on whether and when to engage in talks?

SECRETARY TILLERSON: The President’s policy on North Korea is quite clear, and there is no daylight at all between the President’s policy and the pursuit of that policy. And the President, I think, has been very clear that we are going to lead this pressure campaign, we’re going to unite the international community, and we’re going to keep the pressure as much as we can and increase it where possible. Most recently, the President called President Xi personally and asked him for China to cut the oil supplies off to North Korea to increase this pressure. That is intended to lead to diplomatic talks. In the meantime, the President has been very clear: Militarily, we are going to be prepared should something go wrong. And our military is prepared.