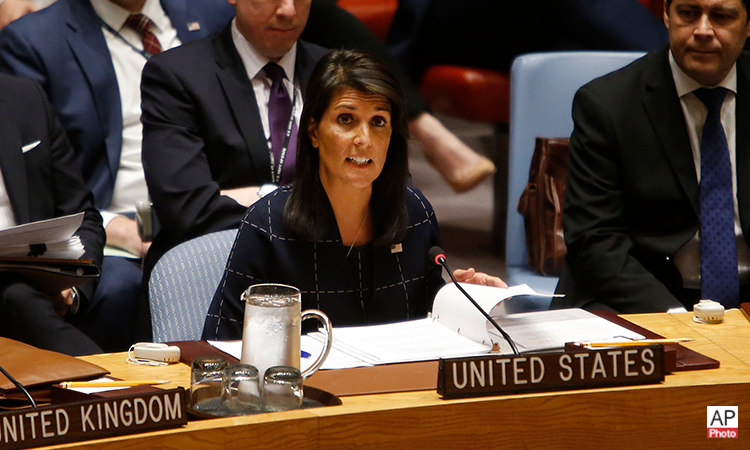 United States Ambassador to the United Nations Nikki Haley speaks after voting to adopt a new sanctions resolution against North Korea during a meeting of the U.N. Security Council at U.N. headquarters, Monday, Sept. 11, 2017. (AP Photo)

Thank you, Mr. President, and thank you for your briefings, Assistant Secretary-General and High Commissioner Zeid.

I am grateful for this discussion today, because we must tell the full story of the North Korean people. Only a few of them, some with us today, have escaped to tell the truth about their struggle for freedom. My hope is that we hear their stories today and add our voices to the cause of basic human rights in North Korea. The systematic human rights violations and abuses of the North Korean government are more than the cause of its people’s suffering. They are a means to a single end: Keeping the Kim Jong Un regime in power.

The regime is using that power to develop an unnecessary arsenal and support enormous conventional military forces that pose a grave risk to international peace and security. Their menacing march towards nuclear weapons begins with the oppression and exploitation of ordinary North Korean people. Through the export of workers abroad to earn hard currency and the use of forced labor at home, the regime uses its people to underwrite its nuclear and ballistic missile programs.

The government has developed a strict caste system designed to control and suppress the will of the people. The regime forces the North Korean people to work up to 14 hours a day, six or seven days a week, often with no compensation. Failure to report to an assigned job can result in imprisonment in a forced labor camp for six months to two years. NGOs have revealed video footage of children as young as five forced to carry out heavy labor in dangerous conditions, including work on railroad lines and in mines.

Meanwhile, the Kim regime not only builds nuclear weapons, it builds theme parks and high rises in Pyongyang for the elite and politically obedient, where they live in relative comfort. The remaining 85 percent of North Koreans must obtain permission to enter the city. The country is dotted with military checkpoints to ensure that everyone stays where the government wants him or her to be.

Worse, the North Korean government imprisons an estimated 100,000 North Koreans, including children, in political prison camps. There, they face torture, forced labor, summary executions, starvation, sexual violence, and other forms of inhumane treatment. Many of those detained aren’t in the camps because of anything they did but because of something a family member did. The North Korean regime’s system of “guilt-by-association” allows for up to three generations of family members to be imprisoned along with the accused.

Defectors have reported that all North Koreans age 12 and older are required to attend public executions – a graphic reminder of consequences of disobedience of the government. The regime bans foreign media – radios and televisions are fixed to state media channels. State security officials regularly raid apartment buildings in an effort to catch individuals with foreign media. Punishment for possession of a foreign DVD or SD card can include imprisonment or even execution.

And it’s not just North Koreans who suffer under this system. A large number of Japanese and other citizens have been abducted by the North Korean government over the past few decades.

Many of their family members still don’t know what’s become of their loved ones. And we cannot overlook the terrorist acts the North Korean government has committed against both its own nationals and other nationals abroad, most recently in Kuala Lumpur.

But even for North Koreans trying to escape, the road to freedom is dangerous and sometimes deadly. They must survive border guards who shoot to kill. They must contend with traffickers who lure them into forced labor, sex work, or forced marriages. And then they must remain undetected as they cross international borders in search of a country that will provide temporary protection.

What makes these dangerous escapes even more harrowing is that many defectors do not reach freedom on their first attempt. North Koreans fleeing to neighboring states are often caught, detained and forcibly repatriated. The regime subjected returnees to torture, sexual violence, arbitrary detention and imprisonment. In some cases, they are killed.

The majority of asylum seekers are women. They pay the highest price for being captured and repatriated. In addition to certain torture, hard labor, and other abuses, the regime subjects returned pregnant women to forced abortions in an effort to maintain, “ethnic purity.” If the baby is born alive, it is killed.

These details are so horrific that they are difficult to believe. So today I’ve invited two remarkably courageous women who were imprisoned multiple times in North Korea before escaping to China. I’d like to ask these brave women, Ms. Ji Hyeon-A and Ms. Jo Yuri, to briefly stand to be recognized, thank you. Given time constraints, I would like to now share a bit of one of their stories.

Ms. Jo suffered greatly as she sought to flee the repressive North Korean regime. After serving in the North Korean military for several years, she returned to her hometown to find that her mother had been detained and tortured for dealing with Chinese traders. When her mother was released from detention after two months, she died while Ms. Jo was carrying her home on her back.

To make a living, Ms. Jo continued her mother’s business working with Chinese traders and also found herself being harassed, jailed, and tortured by North Korean security officials. Eventually, she landed in a North Korean detention center after a failed attempt to escape, where she was tortured and beaten and nearly lost her life. But she was determined to create a better life for her young daughter, so she tried again. She escaped to China in 2014, where she was caught but was able to find a way out of detention to reach South Korea in 2015.

She is now a successful entrepreneur running a small cosmetics company and works to raise awareness about the terrible conditions in North Korea. These two amazing women have the kind of courage and persistence that few human beings can claim. I thank them and all other North Korean defectors who have survived to tell their stories. They are the voice for millions of their countrymen and women who remain trapped in a walking nightmare.

The tragic reality, though, is that the North Korean regime and other enabling Member States are creating new stories like these every day. That is why immediately following this meeting, the United States will co-host an event on this issue along with Australia, Canada, France, Japan, the Republic of Korea, and the United Kingdom in conference room one.

This will be a rare chance to hear directly from Ms. Ji and her experience in detail. We will also hear from the former Chair of the Commission of Inquiry, Justice Michael Kirby, and renowned North Korean human rights expert, David Hawk. I urge you all to join us and participate in our discussion.

We must insist that the North Korean government and other relevant Member States immediately implement the recommendations of the Commission of Inquiry, the Secretary-General, and the Special Rapporteur for human rights in North Korea. Member States must also provide a safe passageway – or temporary protection – for North Korean asylum seekers.

The forcible repatriation of these women means certain torture, sexual violence, and hard labor. Too often, it is a death sentence. During his visit to the South Korean National Assembly in November, President Trump described the obligation we all have to open our eyes to the evil of the North Korean regime – and to act.

He said, “It is our responsibility and our duty to confront this danger together – because the longer we wait, the greater the danger grows, and the fewer the options become.” The crisis in North Korea is one of human rights and peace and security. History will judge us on how we respond.