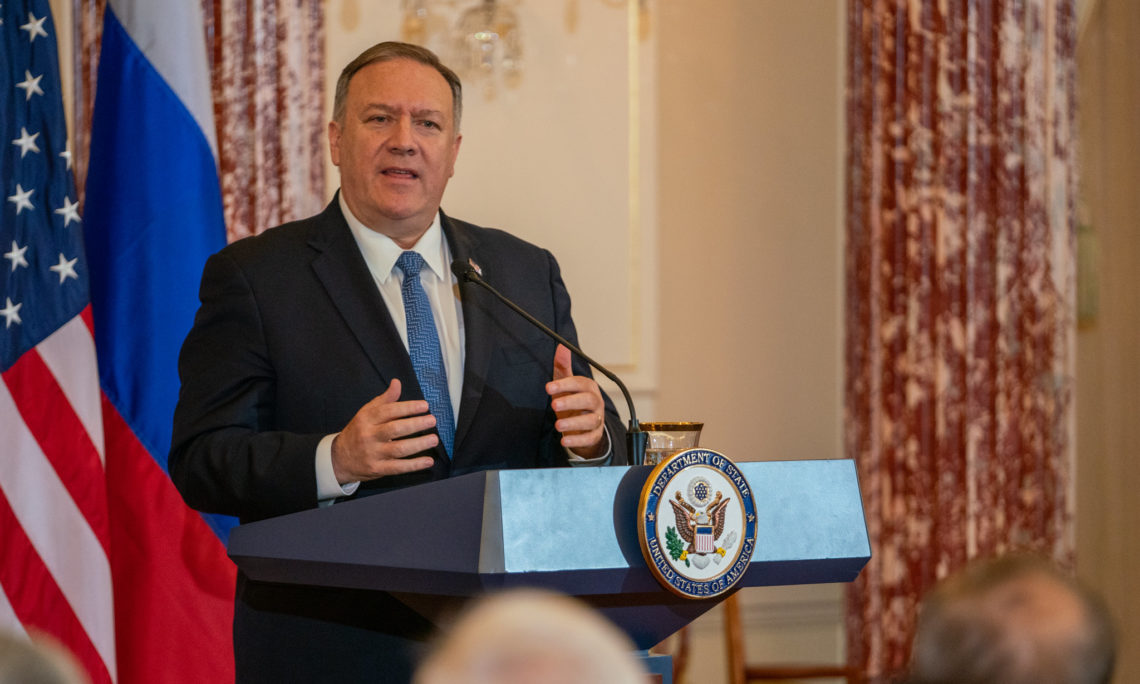 QUESTION: Good afternoon, Mr. Secretary. On North Korea and your discussions with North Korea, are you satisfied with Russian and other countries’ sanctions enforcement? And then also within the past week, North Korea has warned of a “Christmas gift” for the United States. Is the administration prepared or expect North Korea to return to a more aggressive posture, perhaps want to terminate negotiations?

Foreign Minister Lavrov, in your discussions over Paul Whelan, are the U.S. and Russia any closer to resolving that case? Is Paul Whelan any closer today to freedom? And also, Mr. Foreign Minister, do you believe that Ukraine meddled in the U.S. election in 2016, and is that specifically something that you discussed with the Secretary today?

SECRETARY POMPEO: Thank you. With respect to North Korea, we have worked with the Russians on enforcement. I’ve told Foreign Minister Lavrov repeatedly that we appreciate the enforcement level that they have. They’ve done good work. These are UN Security Council resolutions; these aren’t American sanctions per se. These are all driven by the UN Security Council resolutions that the Russians voted for themselves. There’s always more work to be done on enforcement. There’s a major event on the 22nd of December where every nation is required to have all North Korean workers out of their country. We talked about that today and the importance – there are many North Korean workers that have been in Russia. The UN Security Council resolution requires them to depart. We’re hopeful that they will be able to complete that and come into full compliance with that.

As for our expectations with respect to North Korea’s behavior, I think President Trump’s been unambiguous about our expectation. Chairman Kim personally made the commitment to denuclearize; said there wouldn’t be long-range missile tests, nuclear tests. All of those are commitments that we are very hopeful that the North Koreans will continue to abide by. We continue to work to try and develop places where we can communicate, negotiation mechanisms where we can talk to them about paths forward to achieve the denuclearization that both Foreign Minister Lavrov and I are determined to help the North Koreans achieve. It’s a place where we have overlap on our objective. We need to jointly figure out a way together to assist the North Koreans to get there so that North Korea can and the North Korean people can have the brighter future that President Trump has spoken so often about.

FOREIGN MINISTER LAVROV: (Via interpreter) As for North Korea, I would like to add a few words on that. You asked whether the U.S. is satisfied with the enforcement of sanctions against North Korea, the sanctions by the UN Security Council. (Inaudible) sanctions are an instrument that is being used by the UN Security Council. However, that resolution does not deal only with sanctions. They also include the need to engage more actively in political process, and that has often been lost.

Now, these efforts to cover the current situation – we’re convinced that this political process needs to be actively supported and a key role is being played by the direct dialogue between the U.S. and Pyongyang, and we promote the re-establishment of this dialogue. We’re positive that this dialogue can yield result only in the case when it follows the idea of reciprocal steps. You cannot demand North Korea to do everything and right now and only then go back to ensuring its security and lifting the sanctions and the rest of all of it. The humanitarian situation in North Korea requires urgent steps that would allow to understand the capability of the global community not only to deal with the resolutions, but also the preparedness of the global community to respond to absolutely legitimate economic and humanitarian needs of North Korea.

Right now, those goods that are not being covered by any sanctions, neither the UN sanctions nor the U.S. sanctions, are very hard to deliver to North Korea because producing companies as well as transportation companies are afraid. They’re simply afraid that for only mentioning that they had certain – even though legitimate business, but business with North Korea, they can be punished again. This situation has brought us to that impasse where we are at right now, and we call upon the North Korean leadership to show restraint, of course, and we expect that the conditions will be created for the renewal of this dialogue. [Full Text]