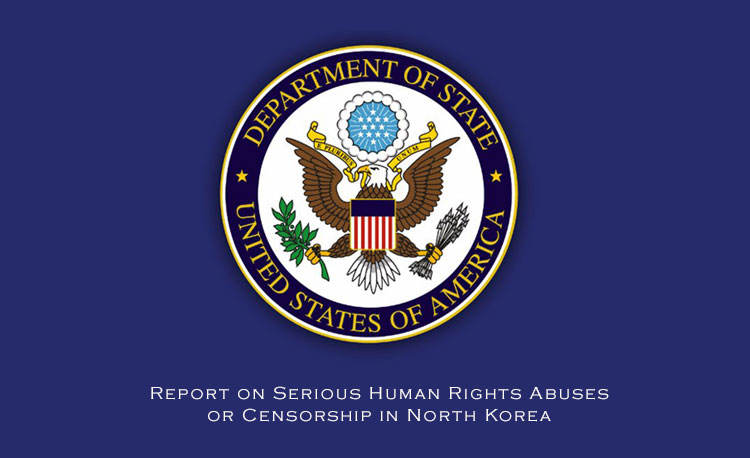 Report on Serious Human Rights Abuses or Censorship in North Korea
Prepared by: U.S. Department of State, Bureau of Democracy, Human Right, and Labor
Submitted in compliance with: Section 304 (a) of the North Korea Sanctions and Policy Enhancement Act of 2016, Public Law 114-122, enacted on February 18, 2016

The Government of the Democratic People’s Republic of Korea (DPRK or North Korea) continues to censor the media and commit serious human rights violations and abuses, including violations of individuals’ freedom of expression. There is no independent domestic media in the country, and all media are strictly censored. No content that deviates from the official government line is tolerated.

Defectors report that government officials and interagency security groups continue to censor materials through the pre-screening of publications and restriction of information through other mediums including phones, tablets, and print media. According to the Department of State’s 2017 Human Rights Report on North Korea, the government added a software-based censorship program known as the “signature system” to all domestic mobile phones. This system makes it impossible to view foreign media on the phones.

The UN Special Rapporteur for Human Rights in North Korea and NGO reports affirm that the government continues to punish individuals who listen to foreign media or produce content that is critical of the government, in violation of the individuals’ freedom of expression. The government arbitrarily detains or, in some cases, even executes violators. Individuals can be severely punished for simply owning radio or television sets able to receive non-government broadcasts.

On July 6, 2016, the Department of State submitted the first biannual report to Congress identifying persons determined by the Secretary of State to be responsible for serious human rights abuses or censorship in North Korea and containing an annex listing associated entities and officials. Additional reports were submitted on January 11, 2017 and October 26, 2017.

This report details aspects of the human rights and censorship situation in North Korea and the conduct of persons, including the following Government and/or Workers’ Party of Korea (WPK) controlled groups and officials determined by the Secretary of State to be responsible for the commission of serious human rights abuses or censorship in the DPRK.

Group 109 (also known as Group 1118 and Group 627) is a committee comprising members of the Ministry of State Security (MSS), the Ministry of People’s Security (MPS), and other offices. The committee is most notable for its mandate to restrict the sale or use of foreign media and/or content. Only CDs and DVDs bearing a government seal indicating that they have been reviewed and approved may be used. North Koreans caught with illicit entertainment items such as DVDs, CDs, and USBs are at a minimum sent to prison camps and, in extreme cases, may face public execution. Furthermore, officers in Group 109 have the authority to randomly inspect and raid individuals’ homes without a warrant. A Universal Periodic Review of the Human Rights situation in North Korea released by the Committee for Human Rights in North Korea confirmed that Group 109 continues to engage in these activities and commit further abuses.

Group 118 is a committee that was initially created to stop the trade and movement of illegal drugs. Now its mandate is similar to that of Group 109, and it is known for its particular focus on the inspection and confiscation of computer content. This group is reportedly made up of officers from the MSS and MPS. It conducts random inspections of computers, computer discs (USB and CD-ROM), portable data storage devices, and cell phones (including Chinese cell phones).

Group 114 is a committee created by the WPK and the MSS that is tasked with restricting what the government considers impure media. Its primary function is to censor content and investigate individuals who have allegedly obtained access to foreign media. This group not only prevents outside information from entering the DPRK, but also scrutinizes officials to prevent confiscated products from being resold or consumed. The committee secretly monitors Jangmadang (North Korean markets) and surveils defectors living in China. According to media reports, Group 114 agents are responsible for kidnapping defectors who escape into China and sometimes even South Korean and Chinese individuals involved in human rights activities. If captured, these individuals are either executed or sent into the political prison camp system, where serious human rights abuses such as torture, deliberate starvation, forced labor, and sexual violence are systematized as a matter of State policy.

Jong Kyong Thaek is the Minister of State Security. In this capacity, he oversees the MSS. In the July 6, 2016, report, the Department of State identified the MSS and the National Defense Commission as responsible for serious human rights abuses and censorship. Given the highly centralized and hierarchical nature of the North Korean government and Jong’s status as Minister of State Security, it appears Jong plays a role directing the censorship activities and abuses perpetrated by the MSS. Most notably, he is involved in directing abuses committed in the political prison camp system, where serious human rights abuses such as torture, deliberate starvation, forced labor, and sexual violence are systematized as a matter of State policy.

Choe Ryong Hae is the vice chairman for organization for the WPK and the director of the WPK Organization and Guidance Department (OGD). He is also vice chairman of the State Affairs Commission, a member of several powerful WPK committees including the WPK Central Committee Political Bureau Presidium, and a deputy to the Supreme People’s Assembly. The OGD, a Party oversight body, is possibly the most powerful organization inside the DPRK. As noted in the Department of State’s July 6, 2016, report and NGO reports, the OGD is instrumental in implementing the DPRK’s censorship policies. When a party official deviates from the official message in public remarks, the OGD will dispatch an official to monitor a self‑criticism session. The OGD also assumes oversight responsibilities of organizations undergoing party audits to inspect for ideological discipline.

Pak Kwang Ho is the director of the WPK’s Propaganda and Agitation Department (PAD), which controls all media produced in the country. In the July 6, 2016, report, the Department of State identified the PAD as responsible for censorship; further, it maintains oppressive information control and is responsible for indoctrinating the people of the DPRK. In his capacity as Director of the PAD, Pak is responsible for maintaining ideological purity and managing the general censorship functions of the PAD, furthering the suppression of freedom of speech, expression, and censorship in the DPRK.