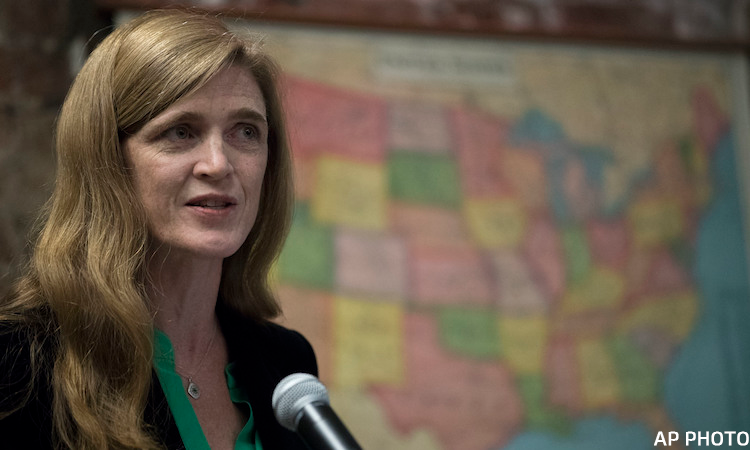 Thank you, Mr. President, and thanks to all Council members who supported the holding of this session in order to address a grave crisis. Thanks to Deputy Secretary-General Eliasson, who we will miss, and Assistant Secretary-General Gilmour, for your appropriately bleak briefings.

This is the third time the Council is meeting to discuss human rights in the Democratic People’s Republic of Korea. We first took up the issue in 2014, on the grounds that the widespread and systematic human rights violations being committed by the North Korean government posed a threat to international peace and security. Unfortunately for the people of North Korea, the deplorable human rights situation in the DPRK remains unchanged. As the UN Commission of Inquiry put it in its 2014 report, the situation still – to this day – “does not have any parallel in the contemporary world.”

As we’ve seen in other parts of the world, when governments flagrantly violate the human rights of their own people they almost always show similar disdain for the international norms that help ensure our shared security. We see the DPRK regime grow its illicit weapons program rather than growing its own children. According to the World Health Organization, one in every four kids in the DPRK suffers from stunted growth as a result of chronic malnutrition. And yet, while children in North Korea go hungry, the regime continues to channel the overwhelming majority of its resources into building up a weapons program that this Council has repeatedly told it to stop.

Let me give another example of how these two issues are linked. Last April, the United States hosted a meeting at the UN where defectors shared their experiences. One of the speakers was Kim Hye-sook, who had been sent to the Bukchang Political Prison at the young age of 13, where all prisoners – including children – were forced to work 16 to 20 hour days in the coal mines. Many died in the camp, she said, including her husband and brother. Some were literally worked to death. The prison guards didn’t care, Ms. Kim – who spent 14 of her 28 years on this Earth in the camp – Ms. Kim recalled, because in the eyes of the guards the victims were, “not even worth one ton of coal.”

Such harrowing conditions would be worthy of condemnation in any circumstances. But they are relevant to the discussion of international peace and security because, as we all know, coal exports account for one-third of DPRK’s total export revenue. Revenue that, according to resolutions adopted by this Council, is supposed to go to helping the North Korean people. But the DPRK regime uses the revenue from working its people to death in these coal mines to build more nuclear weapons and ballistic missiles. This is one of the many reasons why the DPRK sanctions resolution adopted by the Security Council last week is the first-ever to state explicitly that the North Korean government must respect and ensure the “welfare and inherent dignity” of people in its territory.

So please, in 2016, let us end the debate over whether the DPRK’s human rights violations constitute a threat to international peace and security. This debate distracts us from focusing on the catastrophic human rights situation in the DPRK and what we can do to change it.

Today I would like to highlight one of the most devastating consequences of the DPRK’s actions – the families who have been torn apart by the regime’s abuses. In October, I traveled to the Republic of Korea and Japan, where I had the chance to meet directly with some of the affected families, and the pain of separation was the common thread that ran through every one of my conversations.

In South Korea I visited the Hanawon resettlement center, which tries to prepare recently arrived defectors from North Korea for their immersion into a completely different world, as well as a school in Seoul for young defectors. One young woman I met in Hanawon spoke of how she had told no one – not even her parents – about her intention to flee North Korea. Yet even though her parents knew nothing of her plans, local officials went on to blame them anyway, hounding the family until they were forced to flee their home and go into hiding. Another young defector in Seoul told me that her widowed mother – who also knew nothing of her daughter’s plans to flee in advance – had been forced to move seven times by North Korean officials as punishment for what her daughter had done. She said her mother was so afraid of being uprooted again that she had stopped going outside unless she absolutely had to. Both of these young women, like so many others I met, expressed profound guilt – imagine that, guilt – for having added to their families’ already crushing hardships, and for leaving without saying goodbye. Almost all asked that I not write down their names, for fear that speaking out would lead to even more reprisals by the regime against their loved ones.

In Japan, I met with the mother and brother of one of the Japanese citizens who was abducted by DPRK agents. Megumi Yokota was just 13 years old when North Korean agents abducted her in Japan’s Niigata Prefecture in 1977. Her mother told me that nearly 40 years later, not a day goes by when she does not feel the overwhelming pain of being separated from her daughter – a pain made worse by not knowing her daughter’s fate. As a mother myself, I can’t fathom the anguish of having my daughter taken away and not being able to find out what happened to her. It is every parent’s worst nightmare and it is a nightmare being lived daily by many families around the world.

There are so many families in Japan and the Republic of Korea who have been forced to endure a similar nightmare as a result of the actions of the DPRK; who wake up every day yearning to see a father or brother, a mother or daughter – who they may not have not spoken to in years or even decades, and who they worry may be suffering terribly inside North Korea. Many fear they will never get to see them again. It is a pain that ripples across generations and is felt to this day.

Immediately after this meeting today, the United States will co-host an event on this issue together with the Republic of Korea, Japan, and the United Kingdom in Conference Room 1, where we will have a chance to hear directly from two people who are living through this searing separation. I urge other Council members to come and hear them speak.

Now, some may look at the severity of DPRK’s repression and the decades it has persisted and conclude that there is little we can do to change it. But that would be a mistake, for there is so much we can do.

We can continue to shine a light on the abuses the regime commits, as we are doing here today. It is crucial that we keep holding meetings in the Security Council on the human rights situation in the DPRK every year – for as long as this human rights crisis and its destabilizing effects persist.

We can continue to press for accountability for the perpetrators and architects of these abuses. That is what the United States did on July 6 of this year, when we released a report identifying 15 North Korean officials and eight entities as responsible for or associated with human rights abuses and censorship. Our message to these officials – and to all the mid-level officers, including prison camp managers and guards, interrogators, and defector chasers – is clear: We are methodically documenting your abuses, and your impunity will not last forever. When the day comes that you are publicly held accountable, we will be ready. In the meantime, we will continue to collect evidence of your abuses and add names to the growing list.

The Security Council also has an important role to play, not just by continuing to hold meetings like this one on the DPRK, but also considering the Commission of Inquiry’s recommendation that the situation in North Korea be referred to the International Criminal Court, and by considering other appropriate options on accountability – as Member States urged the Council to do just a few weeks ago, in a resolution on human rights in North Korea, which was adopted by consensus in the Third Committee.

There is a great deal individual Member States can do as well, including providing support for the High Commissioner for Human Rights’ field office in Seoul – which is methodically gathering evidence of the DPRK’s human rights violations. Member States can also meet their obligations under the Security Council resolutions sanctioning the DPRK – particularly the new restrictions on coal exports, given what we know about the harrowing conditions in the DPRK government-run mines. And Member States can stop repatriating the people who manage to escape North Korea, knowing the likelihood that those who are returned will be sent to the DPRK’s gulags. These are steps we can take, these are within our control. Just by not repatriating people who make it across an international border, believing that they are finally going to be free from these harrowing conditions – we could save so many lives.