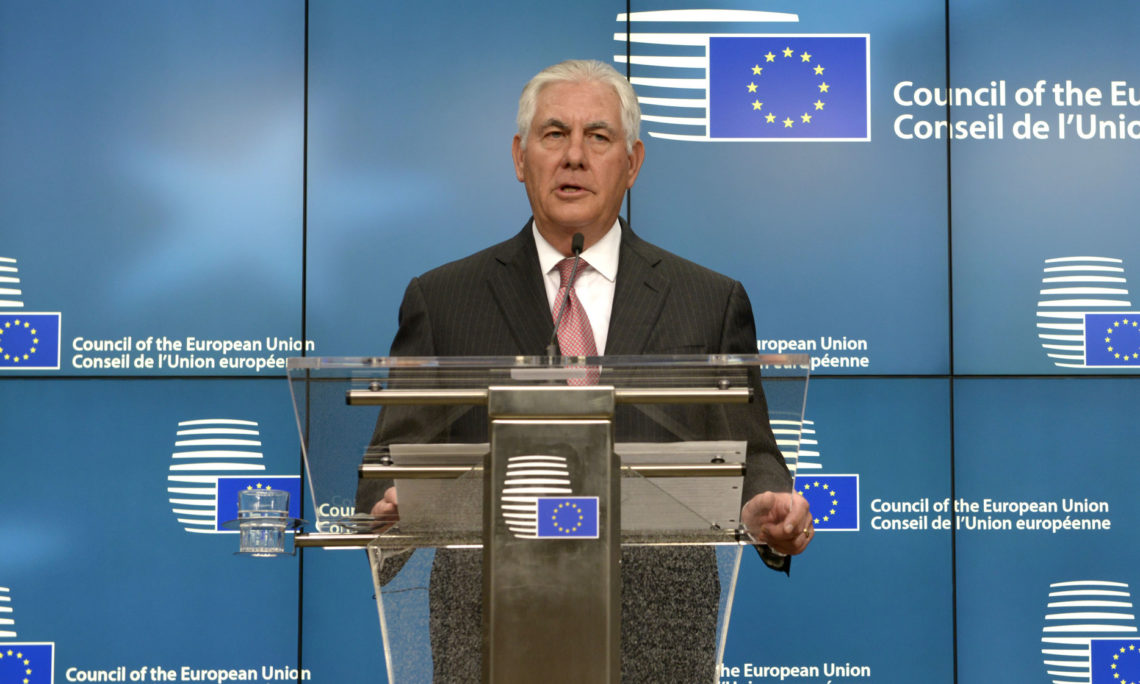 Secretary Tillerson Addresses Reporters During a Joint Statement to the Media

MODERATOR: (In progress) ladies and gentlemen, and welcome. High Representative Vice President Federica Mogherini and U.S. Secretary of State Rex Tillerson just had a bilateral meeting and will deliver press statements to update you on their discussions.

High Representative, you have the floor.

HIGH REPRESENTATIVE MOGHERINI: Thank you, Maja, and it’s a pleasure to welcome you, Rex, Secretary Tillerson, to Brussels, the heart of the European Union, after the good visits we received in spring of President Trump and of Vice President Pence. It’s a pleasure to welcome friends and work together. We just had a good exchange of views, and after this press point discussions will continue together with the foreign ministers of all the European Union member-states.

Our meeting today has confirmed the importance that the European Union and the United States attach to their close partnership and cooperation. I believe we can say that it’s also an opportunity to renew collectively our commitment to a close cooperation on a number of important points.

During our bilateral meeting we discussed mainly four issues; first of all, the Middle East peace process, the European Union support, the resumption of a meaningful peace process towards a two-state solution. We believe that any action that would undermine these efforts must absolutely be avoided. A way must be found through negotiations to resolve the status of Jerusalem as the future capital of both states so that the aspiration of both parties can be fulfilled.

We will discuss this further with Prime Minister Netanyahu next Monday here in Brussels and with President Abbas later, at the beginning of next year, as we will host both of them separately at our next foreign affairs councils. We will also continue to engage with our international and regional partners, including within the Quartet, to support the prospectus of a resumption of negotiations towards the two states.

We also discussed Iran, in particular the implementation of the nuclear deal with Iran. I have reaffirmed the European Union view that continued implementation of the Iran nuclear deal is a key strategic priority for European security but also for regional and global security. We have discussed the fact that there are other issues that we should discuss and tackle together, but they are not under the scope of the nuclear agreement and therefore we are willing to address them outside of the agreement itself. The European Union is willing to work closely with the United States on these issues on the basis of continued U.S. implementation of the nuclear deal. It was decided that nuclear deal would have been purely on nuclear issues back some 14 years ago, so now dismantling an agreement on nuclear issues that is working, as the IAEA has certified for nine times, would not put us in a better position to discuss all the rest on the country.

Third, we discussed the situation in Syria, looking at the wider Middle East. We share the belief that it is urgent to rapidly advance towards a negotiated political transition process in Syria based on Geneva peace talks and the UN Security Council Resolution 2254. I’ve used this opportunity to inform Secretary Tillerson about the preparations for the second ministerial conference that we will host here in Brussels in spring next year on the future of Syria and the region that will look at ways to continue supporting the Syrian people and their hosting communities not only from a humanitarian point of view but also guaranteeing political and economic support to the UN-led negotiations in Geneva, offering incentives towards a political solution to be reached under UN auspices in Geneva.

Last but not least, we discussed the Western Balkans. We have both reaffirmed our commitment to the region, which has a clear European Union perspective, and encouraged continued reforms and negotiation process in the region.

We will now continue these conversations together with our colleagues, EU member-states’ foreign ministers. I expect other issues will be addressed. Some of them actually were already subject to our conversation, including the situation in the Korean Peninsula, our cooperation in support of peace and stability in – and territorial integrity in Ukraine, and latest developments in the wider region of the Middle East or in Libya.

We also, I would expect, will discuss with the foreign ministers of the 28 member-states our cooperation in international fora, as the European Union, as you know well, is and remains a strong and reliable supporter of multilateralism, UN system, and a rules-based global order.

Thanks. Thank you again for the visit and for the good exchange.

SECRETARY TILLERSON: Well, thank you very much. It’s indeed a pleasure to be back in Brussels, and I think meetings like the one that was just held between the high representative and myself illustrate again the strong commitment that the U.S. has to the European alliance and the important role that the European alliance plays in our shared security objectives, and vice versa as well. The partnership between America and the European Union, I think as everyone knows, is longstanding. It is one that’s based upon shared values, shared objectives for security and prosperity on both sides of the Atlantic, and we remain committed to that.

I think during our meetings today, as the high representative mentioned, there were a number of important issues discussed and views exchanged. And in particular on North Korea, we appreciate the resolute stance of our European allies to send a message to the regime in North Korea of our we do not accept the nuclear weapons program that they have undertaken and we view that it is an important objective for all that there be a denuclearized Korean Peninsula. And again, this economic pressure will continue until either North Korea reverses its course, certainly to encourage talks to get underway to do so.

We also discussed, as the high representative mentioned, our joint efforts under the JCPOA to hold Iran fully compliant with the terms of the JCPOA, fully enforce that agreement, but at the same time recognizing that Iran is carrying out a number of other destabilizing actions in the region. And we’ve seen this recently with ballistic missiles being fired from Yemen, which it’s our belief are sourced from Iran; their support for the Houthis, and the destabilizing effect that that has in Yemen. We also know of Iran’s destabilizing effect of exporting weapons and militia to Syria, an area of conflict, and their ongoing support for Hizballah, a terrorist organization. These issues and activities of Iran cannot be ignored and cannot go unanswered, and we intend to continue to take action to ensure Iran understands this is not acceptable to us, and we look forward to working with European partners in that regard as well. It’s a threat, I think, to many of our shared values.

As a NATO member, the United States is very happy and pleased to see NATO-EU cooperation continuing to evolve and deepen since the joint declaration was signed last year, and we’ll certainly have an opportunity for further discussions around that today during the NATO meetings. We know our security is strongest when allies and partners shoulder their fair share of the burden, and that’s why we continue to call on others to increase their defense spending that is towards a shared objective and serves everyone well.

Our European allies are also steadfast supporters of the peace process in Syria. And as the high representative just confirmed, our support for the full implementation of UN Security Council Resolution 2254, a significant effort has been underway as the defeat-ISIS campaign succeeds to move Syria to a process of reconciliation as called for under 2254. And we’re pleased to see talks resume in Geneva under the leadership of the UN Representative Staffan de Mistura and we’ll support those talks in all ways possible to keep those parties at the table to find and chart a new course forward for Syria that will serve the will of the Syrian people.

Like any good relationship, this one requires a lot of attention, and I know the high representative is very committed to this relationship. Her tireless efforts at communication with the United States and the United States Government at all levels is important, and we view it the same. And that’s why I’m here as well today and appreciate the time that she’s given me and the important exchanges we’ve had, and much of this will continue throughout the day as we have a full agenda ahead of us. So thank you.

MODERATOR: Thank you very much. This concludes this press conference.