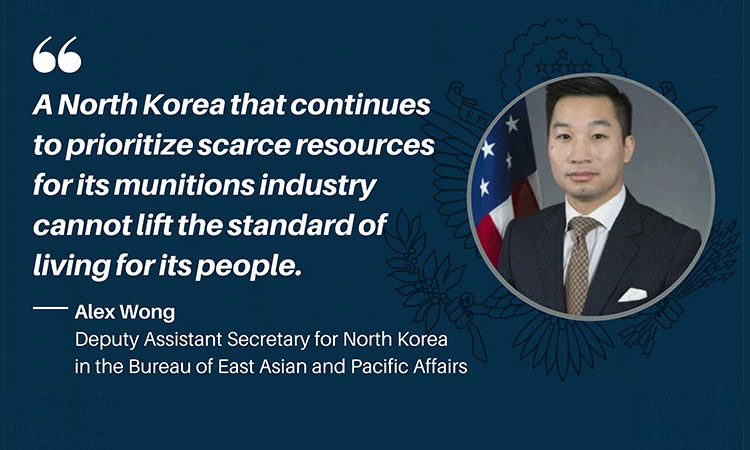 We all want—and should want—an improved economy for the DPRK. An economically strengthened DPRK would permit millions of North Koreans to escape dire poverty and hunger. It would allow every day North Koreans to improve their well-being. And it could enable every North Korean to hope for more for themselves and for their families than they perhaps permit themselves to in current times.

First among these objectives is a lasting solution to the regional security situation. The clear and simple truth is this: the biggest obstacle to an economically strong North Korea is the regime’s programs to build nuclear, chemical, and biological weapons and the means to deliver those weapons around the globe. A North Korea that threatens the region and the world cannot at the same time build permanent and productive economic relations. A North Korea that resists the global non-proliferation consensus cannot form lasting bonds with the community of nations. A North Korea that continues to prioritize scarce resources for its munitions industry cannot lift the standard of living for its people.

Nuclear weapons are neither a sword nor a shield for North Korea. They are a millstone upon its neck.

For the North Korean economy to reach its potential—for the lives of all North Koreans to be elevated—its strengthening must come alongside the complete denuclearization of North Korea and the establishment of a permanent peace regime on the Korean Peninsula.

Those who say otherwise are misguided. Or perhaps—more accurately—they are guided by interests other than the lasting security and prosperity of the Korean Peninsula that certainly remains our priority. Unfortunately I think we have seen over the last couple of years that the leadership of one country in particular—China—has adopted priorities on the Korean Peninsula that are increasingly counterproductive to the goals that we and the rest of the world share.

I’ve spoken with enough Chinese diplomats to understand clearly what course of action the Chinese government is advocating. They are seeking to undo the UN sanctions regime they themselves voted for in 2006, in 2009, in 2013, in 2016, and in 2017. They are seeking to revive trade links and revenue transfers to the North, thereby ensuring Chinese reach into the North’s economy. And they are seeking this all without the North Koreans engaging in serious and substantive negotiations, without an agreed roadmap, and without the DPRK as of yet taking any concrete steps toward denuclearization.

If we follow Beijing’s advice, it would be an act of self-sabotage in the pursuit of peace. By pushing for the expansion of economic ties and the lifting of sanctions right now, at this moment, before addressing the security situation on the Peninsula, Chinese leaders are asking us to build the frame of a house—even furnish it—without laying the foundation first.

Premature sanctions relief would put the stable economic future we all want for North Korea even farther into the distance by removing a key impetus for the DPRK to negotiate and to take serious denuclearization steps.

It would also, in effect, reward North Korea for its continued weapons development. We all saw the October 10 parade in Pyongyang. We were all disappointed by it. That parade demonstrated that North Korea continues to highly prioritize its ballistic missile programs. Lifting sanctions and pumping more revenue into the DPRK while its missile and nuclear production facilities continue to hum is something we will never do, because the world will never subsidize the DPRK’s weapons programs.

We are fortunate that the overwhelming majority of the world understands these truths. These allies and partners stand strong with us in maintaining the sanctions regime while welcoming—indeed actively seeking—negotiations with the DPRK. These allies and partners join us in urging not only fidelity to the UN sanctions framework, but also the hastening of a transformed relationship through good-faith negotiation.

Beijing recognizes this is the functional consensus of the world. The Chinese government knows it is isolated on this issue. So the premature sanctions relief that Beijing can’t achieve through the diplomatic front door, it is instead trying to achieve through the backdoor—by choosing not to rigorously implement its UN Security Council resolution obligations. The examples of this chronic failure are numerous, growing, and worrying.

The UN Security Council—of which China is a permanent member—obligated all UN Member States to repatriate DPRK laborers by the end of last year. The grand majority of countries—from Angola to Cambodia to Mongolia to the UAE—did the hard work of fulfilling that duty, sending many thousands of workers back to North Korea, and ensured that Pyongyang is no longer able to expropriate the salaries of these workers to build more ballistic missiles and nuclear weapons.

Beijing didn’t do that. China continues to host at least 20,000 DPRK laborers, who earn revenue that goes straight back to North Korea’s weapons development efforts. In fact, earlier this year Chinese authorities were making it easier for DPRK nationals to work in China, in complete violation of its UN obligations.

The Chinese government increasingly allows its companies to conduct trade with North Korea in a broad spectrum of UN-prohibited goods, including seafood, textiles, iron and steel, industrial machinery, transportation vehicles, and sand and gravel. Chinese companies transact with North Korean companies and establish UN-prohibited joint ventures with them. They even continue to conduct business with UN-designated North Korean entities and those operating on their behalf—including entities that play key roles in North Korea’s weapons programs, such as Korea Kuryonggang Trading Corporation, the Second Economic Committee, and the Munitions Industry Department.

I want to focus for a moment on the DPRK’s weapons-related trade, because it is perhaps the most brazen of Beijing’s failures. The United States and our partners have greatly narrowed the space for the DPRK to import illicit weapons-related components. But the DPRK still retains shadowy avenues to procure inputs to its weapons programs. The DPRK cannot do that without middlemen. It cannot do that without illicit bank accounts. It cannot do that without a network of money launderers. The overwhelming number of those middlemen, bank accounts, and money launderers operate within the borders of China. China hosts no less than two dozen North Korean WMD and ballistic missile procurement representatives and bank representatives. China was supposed to have expelled these representatives years ago, consistent with the UN Security Council resolutions. But it hasn’t done that. And it’s not because the Chinese government is unaware of them. The United States has provided China with ample actionable information on the ongoing UN-prohibited activities occurring within its borders. But Beijing has chosen not to act.

Beijing’s failures are not limited to weapons-related trade. Chinese authorities must step up their implementation and enforcement against Chinese companies, people, and vessels that use its coastal waters and ports to conduct illicit trade in all UN-prohibited commodities.

On 46 separate occasions going back to 2019, U.S. vessels provided information to nearby Chinese Navy or Coast Guard vessels that ships involved in DPRK fuel smuggling were fleeing into Chinese coastal waters. The Chinese authorities did nothing to stop these vessels in response. Not once.

In the past year, on 32 separate occasions, U.S. vessels observed suspect fuel smuggling ships operating and loitering in Chinese coastal waters. Beijing, again, did not act. Not once.

In the past year, on 555 separate occasions, we have observed ships carrying UN-prohibited coal or other sanctioned goods from North Korea to China. On none of these occasions did the Chinese authorities act to stop these illicit imports. Not once.

400 of those voyages were North Korean-flagged vessels shipping coal to Chinese coastal waters. Most of these shipments go to China’s busy Ningbo-Zhoushan area, where the vessels are required to provide extensive information about their identity, origin, and destination to local authorities. These ships are not coming to China like a thief in the night. They are ringing the doorbell and literally announcing themselves. But the Chinese authorities have done nothing.

On another 155 separate occasions, Chinese-flagged coastal barges have sailed directly into North Korea, loaded up on UN-prohibited coal, and then carried the illicit cargo back to Chinese ports. The Chinese authorities, again, did nothing.

China, for sure, has reduced its overall trade with the DPRK since 2017. That has become even more apparent in 2020 due to COVID-19. But the remaining illicit, unreported trade that exists is significant. And it’s trending in the wrong direction. In no other country do we see this breadth and depth of continuing illicit commercial activity with North Korea, the scale of which puts China in flagrant violation of its obligations.

I’ll let the representatives from China explain why they are unwilling to take effective action to implement the requirements of the UN resolutions—implementation action that many dozens of other countries around the world have taken. But one thing I can say is that Beijing’s failure to meet its international obligations is in direct contravention with China’s professed desire to support a denuclearized, peaceful Korean Peninsula. If it truly wants the latter, it must do the former.

But the United States is not waiting on Beijing to do the right thing. We have and will continue to take action to maintain pressure while pursuing productive diplomacy.

Today the State Department is launching a new website—DPRKrewards.com—through which individuals across the globe can provide information to our Rewards for Justice program on DPRK sanctions evasion. Under this program, an individual who provides information related to sanctionable conduct, including certain illicit DPRK financial activity that supports sanctions evasion, may be eligible for a reward of up to $5 million. There’s a lot of sanctionable trade between China and the DPRK. I assure you, many of the tips we receive through this program will directly implicate that trade.

The United States will also continue to impose sanctions on any individual or entity perpetrating sanctions evasion, including individuals and entities within China’s jurisdiction. We’ve imposed numerous such sanctions designations in the past. And more are forthcoming.

These actions aimed at implementing sanctions, and the ongoing enforcement efforts of our partners around the world, are tough actions. But make no mistake—they are vital to our ultimate objective of peace.

“Peace” is the watchword here. I want to be clear. Our policy is not to impose pressure for pressure’s sake. It never was. And it never will be. Indeed, as the President has said, we very much look forward to the day when we can lift all sanctions and work together to achieve a brighter future and a lasting peace for the North Korean people—including a strong and growing North Korean economy. But realizing that aspiration will require dedication to binding obligations in UN Security Council resolutions. And it will require strong, verifiable, and undeniable steps toward denuclearization.

I know for many people this path to lasting peace may seem distant and unreachable. I know that for many people the idea of the United States and China working together to address mutual concerns about the DPRK’s weapons programs and on effective sanctions implementation seems far-fetched. But I firmly believe that by cooperating with the United States on North Korea issues, China can help itself, it can help North Korea, and it can help the entire world move closer to a secure, prosperous, and peaceful Korean Peninsula.

Just as the United States remains ready, willing, and able to sit down with the North Koreans to make progress on every pillar of the Singapore Joint Statement, we remain ready, willing, and able to work with Beijing on the full range of our overlapping North Korea concerns. The United States remains fully committed to achieving a lasting peace on the Korean Peninsula. Our friends and allies are committed to that lasting peace. And it would benefit the region and the world if China recommitted itself to that noble goal as well.