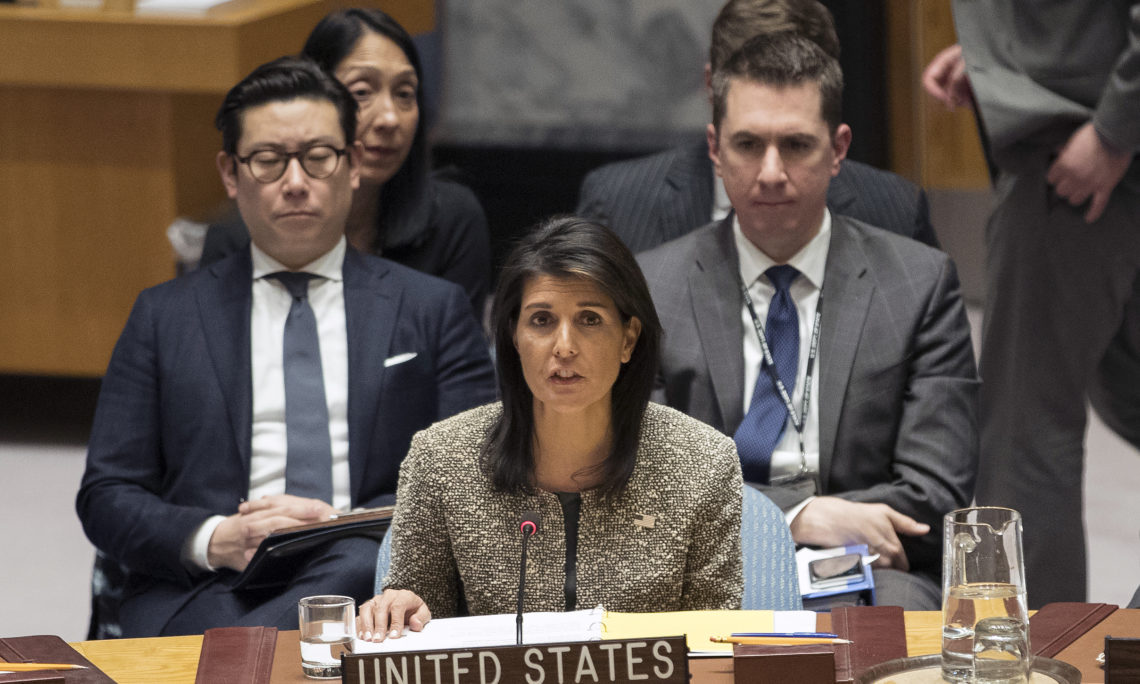 This is the ninth time this year that the Security Council has met in reference to North Korea. Last time we spoke in the Security Council about North Korea’s development of nuclear weapons, the United States made clear that the future of North Korea was in the hands of its leaders. If they chose the path of peace, the world would live in peace with them. But if they chose the path of defiance, we would respond appropriately. The choice, we said, was theirs.

Yesterday, the North Korean regime made a choice. It chose to feed its nuclear aggression. It chose to thumb its nose at the civilized world. It chose to challenge the patience of a world united against its recklessness.

And with this choice comes a critical decision point for the rest of the world. The world has responded powerfully to North Korea’s outrageous and lawless actions. This Council has taken unprecedented measures to stop North Korea’s development of a nuclear-tipped ballistic missile. We have leveled the most impactful sanctions that any country has experienced in a generation. We have cut deep into North Korea’s major export industries to eliminate the revenue for its illegal missile program. We have reduced its military access to the refined petroleum needed to run its war machine.

In addition to our work here in the Security Council, many nations have taken their own strong actions against North Korea’s threat to peace. Just this year, as North Korea’s behavior has become more intolerable, over 20 countries from every corner of the globe have restricted or ended their diplomatic relations. Mexico, Peru, Italy, Spain, and Kuwait have expelled North Korea’s ambassadors from their countries. Portugal and the United Arab Emirates have suspended diplomatic relations. The Philippines and Taiwan have suspended all trade with North Korea. Singapore, formerly North Korea’s seventh largest trading partner, has cut all trade ties. Uganda has halted all military and security ties. The European Union, Australia, South Korea, and Japan have made additional sacrifices for peace and security by going well beyond what the Security Council requires.

All of the countries that have taken actions to isolate North Korea have acted out of deep concern about the regime’s dangerous refusal to abandon its nuclear program. They have selflessly put the security of all of us above their individual political and economic interests. They have won the gratitude of the international community for their responsible actions.

Regrettably, not all countries have done the same.

All UN Member States are – at the very minimum – obligated to fully implement all UN sanctions. But we know that’s not happening in every case.

This Council has banned coal exports from North Korea. And yet, we have reports of the regime continuing to smuggle coal into neighboring Asian countries using deceptive tactics to mask the coal’s origins.

There are countries that are continuing to fund the North Korean nuclear program by violating UN sanctions and obstructing our efforts. The world knows who many of them are.

As successful as we have been in leveling multilateral sanctions against it, the North Korean regime continues to test new and more powerful missiles. And as it does, it continues its march toward a functional nuclear arsenal. The continuing development of these missile systems demands that countries further isolate the Kim regime. So today, we call on all nations to cut off all ties with North Korea.

In addition to fully implementing all UN sanctions, all countries should sever diplomatic relations with North Korea and limit military, scientific, technical, or commercial cooperation. They must also cut off trade with the regime by stopping all imports and exports and expel all North Korean workers.

Just last week, the world was given a stark reminder of the barbarity of the North Korean regime when one of its own soldiers fled the country. Even more than the dramatic video of the soldier’s escape, more shocking was the soldier’s medical condition unrelated to his bullet wounds. While being treated by a South Korean medical team, doctors discovered that the soldier had parasites and uncooked corn kernels in his digestive tract – clear evidence that the North Korean regime is unwilling to properly feed even its own high-ranking military troops. This is the incomprehensible nature of North Korea.

Yesterday, the regime declared itself a nuclear power, saying that it “completed the state nuclear force, tipped with a super-large heavy warhead capable of striking the whole mainland of the United States.” But the North Korean regime missed something very important.

The regime has shown time and again that it doesn’t want to talk. Kim didn’t even speak with President Xi’s envoy when he was sent to talk to the regime. It has emphatically said it will not eliminate its nuclear production. And North Korea is in clear violation of multiple Security Council resolutions.

We are once again at a time of reckoning.

We have some options.

First, we should continue to treat North Korea as the international pariah it has become by taking its UN Rights and Privileges away, including its voting powers.

Second, we know the main driver of its nuclear production is oil. Through sanctions we have cut off 90 percent of North Korean trade and 30 percent of its oil. But the crude oil remains. The major supplier of that oil is China. In 2003, China actually stopped the oil to North Korea. Soon after, North Korea came to the table. We need China to do more.

President Trump called Chinese President Xi this morning and told him that we have come to the point that China must cut off the oil from North Korea. That would be a pivotal step in the world’s effort to stop this international pariah. As I mentioned, many countries have made some big economic and political sacrifices by cutting ties with North Korea. They did that to serve the peace and security of all of us. We now turn to President Xi to also take that stand.

We believe he has an opportunity to do the right thing for the benefit of all countries. China must show leadership and follow through. China can do this on its own, or we can take the oil situation into our own hands.

The dictator of North Korea made a choice yesterday that brings the world closer to war, not farther from it. We have never sought war with North Korea, and still today we do not seek it. If war does come, it will be because of continued acts of aggression like we witnessed yesterday. And if war comes, make no mistake, the North Korean regime will be utterly destroyed.

The nations of the world have it within their power to further isolate, diminish, and, God willing, reverse the dangerous course of the North Korean regime. We must all do our part to make that happen.