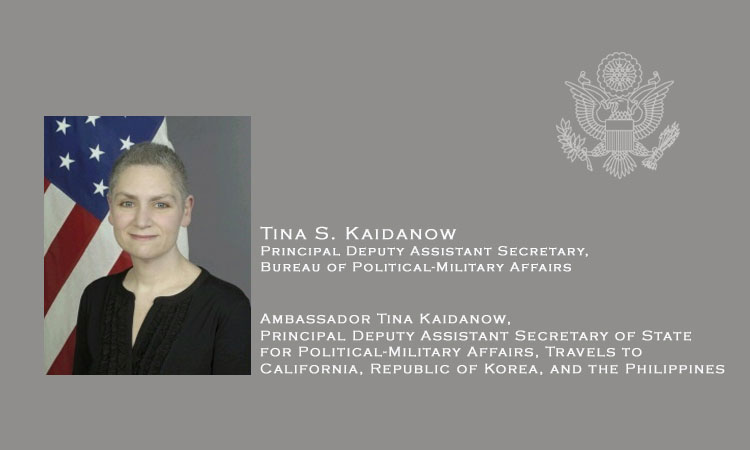 Principal Deputy Assistant Secretary of State for Political-Military Affairs Tina Kaidanow will travel to California, the Republic of Korea, and the Philippines November 29-December 7, for discussions on a variety of international security issues.

In Laguna Niguel, California, Ambassador Kaidanow will deliver remarks at the annual Board of Governors’ Meeting of the Aerospace Industries Association. In its role overseeing Foreign Military Sales and managing the licensing of the Direct Commercial Sales of defense articles, training, and services, the Bureau of Political-Military Affairs works closely with industry to promote a robust defense industrial base and encourage domestic innovation, two key U.S. foreign policy and national security objectives.

In the Republic of Korea, Ambassador Kaidanow will meet with senior officials to discuss a wide range of political-military issues, including regional strategic priorities, defense trade, and military-to-military cooperation. The U.S.-Republic of Korea Alliance is a linchpin of security, stability, and prosperity in the Indo-Pacific, as the Republic of Korea hosts thousands of U.S. service members, is a leading purchaser of U.S. manufactured defense equipment, and is a close partner on a wide range of international security issues.

In the Philippines, Ambassador Kaidanow will consult with senior civilian and military officials on maritime security, counterterrorism, peacekeeping, humanitarian assistance, disaster response, and defense cooperation. A treaty ally, the Philippines is a major regional security partner. It has demonstrated its commitment to building its defense capabilities through Foreign Military Sales and Direct Commercial Sales of U.S.-manufactured military equipment. The Philippines also receives U.S. security assistance, including Foreign Military Financing and International Military Education and Training, which is overseen by the Bureau of Political-Military Affairs.