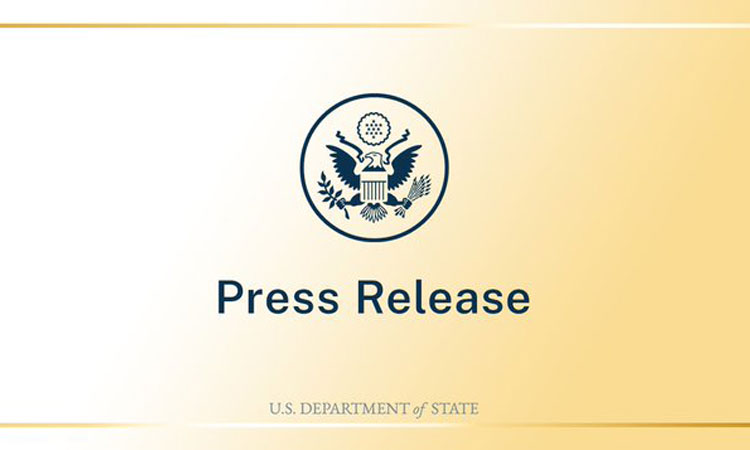 The following is the text of a joint statement signed by the governments of Australia, Canada, New Zealand, Norway, the Republic of Korea, the United Kingdom and the United States.

We reiterate our grave concern over reports of ongoing human rights violations and abuses by the Myanmar Security Forces across the country, including credible reports of sexual violence and torture, especially in Chin State, Sagaing Region and Magwe Region. In Chin State, it is reported the military has burned homes, churches and an orphanage in Thantlang village, and has targeted humanitarian organizations.  More than 40,000 people are reported to have been displaced in Chin State and 11,000 in Magwe Region as a result of recent violence. Reports of internet shutdowns and other methods of communication in Chin State and other areas of the country are also troubling. Communities impacted by violence need access to information to keep themselves safe. We are concerned about allegations of weapons stockpiling and attacks by the military, including shelling and airstrikes, use of heavy weapons, and the deployment of thousands of troops accompanying what security forces assert are counter-terrorism operations, which are disproportionately impacting civilians. We also note our increasing concern at armed clashes in Rakhine State in early November.

The current situation and reports by the UN Special Rapporteur on the Situation of Human Rights in Myanmar raise acute concerns about the risks of future violence and atrocities across Myanmar, and what the international community can and should be doing to prevent such atrocities.

We welcome the Press Statement by the UN Security Council on 10 November, which called for the immediate cessation of violence, protection of civilians, and full, safe and unhindered humanitarian access. We call for the respect of human rights and the immediate cessation of all human rights violations and abuses, and violence against civilian populations. To that end, we call on the international community to suspend all operational support to the military, and to cease the transfer of arms, materiel, dual-use equipment, and technical assistance to the military and its representatives. We encourage the international community to work together to prevent future atrocities in Myanmar, including by supporting justice and accountability for those responsible for atrocities.

The situation in Myanmar has an impact on regional security. We reiterate our support for the ASEAN Five Point Consensus, noting in particular the call for a cessation of violence and for genuine engagement with ASEAN`s Special Envoy in leading inclusive dialogues aimed at peace.

Recalling the horrific violence perpetrated against Rohingya in Rakhine State in 2017, we call on Myanmar Security Forces to immediately end the violence being perpetrated across the country. We will continue to work closely with ASEAN, the UN and the wider international community to promote accountability and support a lasting resolution to the current crisis and a return to the path of democracy.