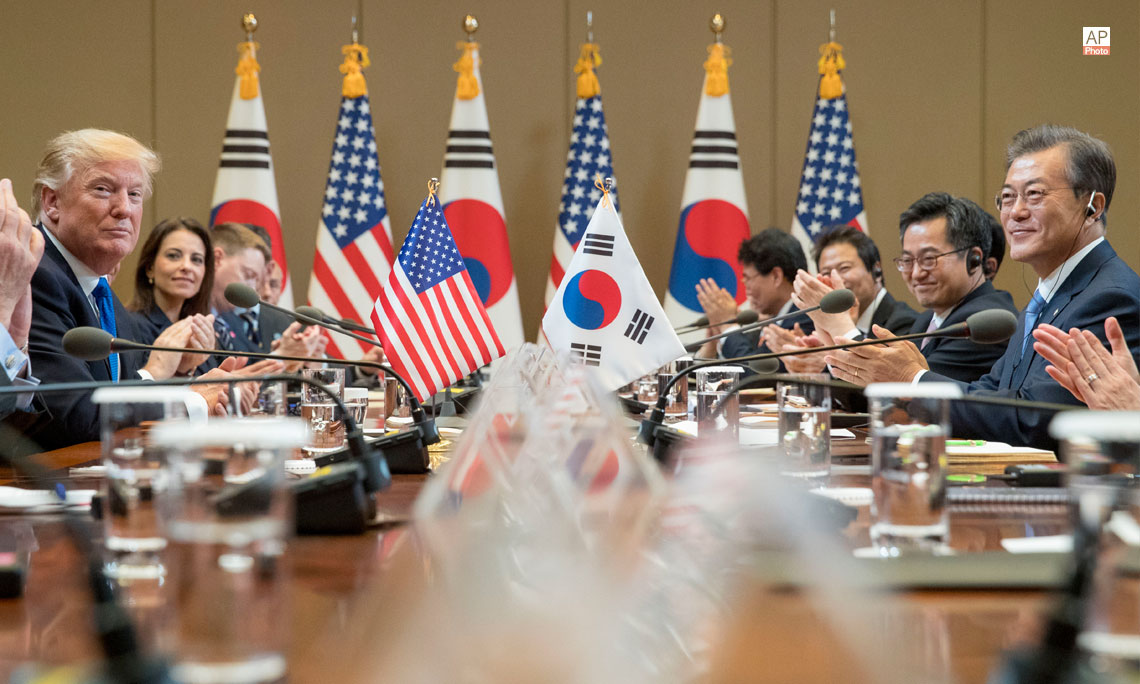 PRESIDENT TRUMP: Well, thank you very much, Mr. President. And it’s an honor to be here with my representatives. And we’re going to have a very busy full day ahead.

It is interesting that it is one year, as of tomorrow, that we had our election victory. And it was great victory, and a victory that made a lot of people very happy. And our country is doing very well from the standpoint of the economy. It’s doing record numbers, record stock market, 17-year low. We have the lowest unemployment that we’ve had in 17 years. And we’ve created trillions and trillions of dollars of value for our country. So we’re very happy.

We’re now working on massive tax cuts for our people, especially our companies which produce jobs in our middle class. And I think that’s going along very well. We hope we’re going to be victorious and get that big tax cut which the American people want.

I had a great time at Camp Humphreys today visiting with the U.S. and the South Korean troops. They are very impressive. Thank you. And as we very easily remember, because it was so good — we had lunch together with the troops. And we had the option of having a magnificent restaurant, a beautiful room, and I said, let’s have it with the troops. And we were very happy about it. It’s a great facility — Camp Humphreys — and it really is a very special place. Tremendous cost — a lot of it spent by your government to make your country safe. And any time you spend wisely for the military, that’s always a good thing to do.

And your military is becoming very strong. Our military is now going to be, very soon, at the strongest level. We’re committed to spending $700 billion, and that number may even go up. For our military, we’re ordering new jet fighters, new equipment of virtually every kind. We make the finest equipment in the world, and you’re buying a lot of it, and we appreciate that. And you’ll be buying a lot of our military equipment. There’s nobody that comes close, whether it’s the planes, the missiles, the ships — anything you want to talk about — there’s nothing like what we do in that sense. And we appreciate your big purchase orders for military equipment.

The North Korea situation will be a discussion that we will have front and center. And hopefully something is going to be very successfully worked out on that. And trade is something that we always talk; it’s one of my favorite subjects. I guess it’s one of the reasons that I had that great, successful victory

last year, at this time. So we’ll be discussing trade also.

We’d like to do much more business with South Korea, where South Korea is going to order a lot more. But the good news is, you will be ordering. I mean, we’ve already worked on that. And through our representatives, the amount of equipment and things that you’ll be ordering from the United States will be very substantially increased and therefore we’ll be bringing the trade deficit way down, which is very important to our people. We have trade deficits with numerous countries, and we don’t want to have trade deficits. So we appreciate that very much. And what you’re getting is the finest equipment anywhere in the world.

And it’s an honor to be with you, and I look forward to spending the rest of today and a good part of tomorrow on negotiating. We’ll negotiate some of those good deals, both ways. Thank you very much. Thank you. (Applause.)