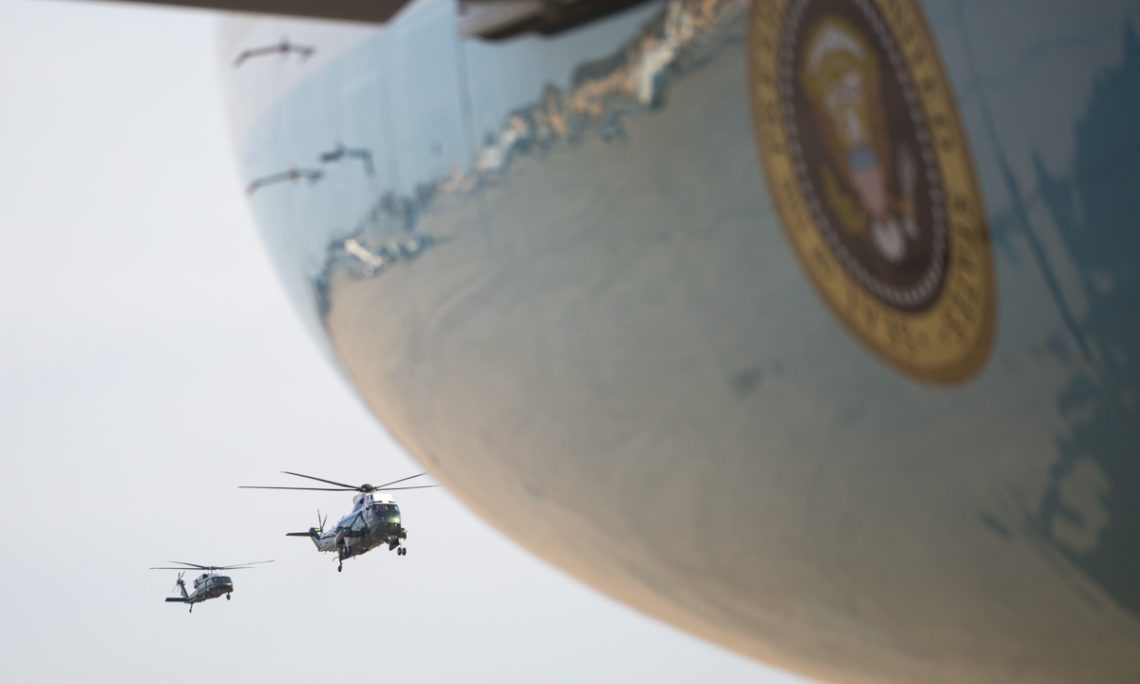 President Donald J. Trump and First Lady Melania Trump arrive at Joint Base Andrews in Maryland, Friday November 3, 2017, and board Air Force One en route Hawaii. This is the first day of a 12 day Asia trip. (Official White House Photo by Shealah Craighead)

On Friday, President Donald J. Trump departed for Asia, his longest foreign trip to date and the longest trip to Asia by an American president in more than a quarter century. President Trump will utilize this trip to demonstrate the Administration’s commitment to the Indo-Pacific region and to strengthen U.S. alliances and partnerships. The President will address a wide array of strategic issues with foreign leaders, including the North Korean nuclear threat.

The President’s trip will focus on three goals: strengthening international resolve to denuclearize North Korea, promoting a free and open Indo-Pacific region, and advancing American prosperity through fair and reciprocal trade. President Trump will stress the United States’ commitment to the complete, verifiable, and permanent denuclearization of the Korean Peninsula and will call on all responsible nations to act now to ensure that the North Korean regime cannot threaten the world with nuclear devastation. The President will underscore America’s openness to expanding economic relations with partners across the Indo-Pacific region who share our commitment to free, fair and reciprocal trade. He will highlight the benefits of a free and open system and emphasize that those governments that unfairly subsidize their industries, discriminate against foreign businesses, or restrict foreign investment should play by the rules and commit to economic reform.

President Trump will first travel to Hawaii where he will have the opportunity to thank American troops at the U.S. Pacific Command and pay his respects at Pearl Harbor. He will depart from here to Japan, where he will meet with Emperor Akihito and Empress Michiko and conduct working meetings with Prime Minister Shinzō Abe and other Japanese leaders to reaffirm America’s unshakeable alliance with Japan as they face the North Korean nuclear threat.

The President will then proceed to South Korea where President Moon Jae-in will host him for a State visit and bilateral meetings. President Trump will also have the opportunity to visit Camp Humphreys to thank American and South Korean soldiers and their families for their sacrifices in defending freedom. He will deliver his first of the trip’s two major speeches at the South Korean National Assembly, where he will praise South Korea’s rise in the last half century in contrast to the totalitarian state of North Korea. President Trump will urge common resolve in the face of the shared threat.

Following South Korea, President Trump will venture to China where he and President Xi Jinping will discuss ways to continue to apply pressure on North Korea. During the State Visit, President Trump will also stress the unsustainability of China’s unfair trade practices that have produced a massive trade deficit, and the President will reaffirm his determination to defend America’s economic interests.

The President will continue on to Vietnam, where he will deliver his second major address of the trip at the APEC CEO Summit in Da Nang and outline the United States’ vision of a free and open Indo-Pacific region where free, fair, and reciprocal trade,  and private sector-led investment and growth generate prosperity and protect the sovereignty of all. President Trump will visit Hanoi for an official State visit and meet with President Quang of Vietnam and other senior Vietnamese leaders to underscore the vitality of the United States and Vietnam’s Comprehensive Partnership.

President Trump will conclude his trip in the Philippines, where he will hold bilateral meetings with President Rodrigo Duterte, Prime Minister Narendra Modi of India, and Prime Minister Malcolm Turnbull of Australia, and attend the U.S.-ASEAN Summit and East Asia Summit.

President Trump plans to use this trip to build on the work that his Administration has already accomplished. The Administration’s efforts to deny terrorists’ safe havens, cut off their funding, and discredit their ideology have contributed to great accomplishments, including the liberation of Raqqa and Mosul, the opening of a new counter-finance center in Riyadh, and a historic speech by Saudi Crown Price Mohammed bin Salman calling for a return to moderate Islam. President Trump will take full advantage of this trip to build on this positive momentum and reaffirm the importance of a free and open system where all independent nations are strong, sovereign, and free from the threats of terrorism, coercion, and nuclear war.