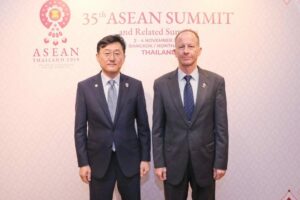 The text of the following fact sheet was released by the Governments of the United States of America and the Republic of Korea following bilateral consultations on the margins of the East Asia Summit in Bangkok, Thailand.

The Republic of Korea and the United States are working together to create a safe, prosperous, and dynamic future for the Indo-Pacific region through cooperation between the Republic of Korea’s New Southern Policy and the United States’ Indo-Pacific Strategy based on the principles of openness, inclusiveness, transparency, respect for international norms, and ASEAN centrality. We are contributing to this effort by promoting prosperity through cooperation on energy, infrastructure and development finance, and the digital economy (“Prosperity”); investing in human capital through civil society capacity building, good governance programming, and development of people-to-people ties (“People”); and by promoting peace and security through capacity building in water management, maritime security, response to climate change, and health care (“Peace”).

PROSPERITY THROUGH INFRASTRUCTURE AND DEVELOPMENT FINANCE

PROSPERITY THROUGH THE DIGITAL ECONOMY