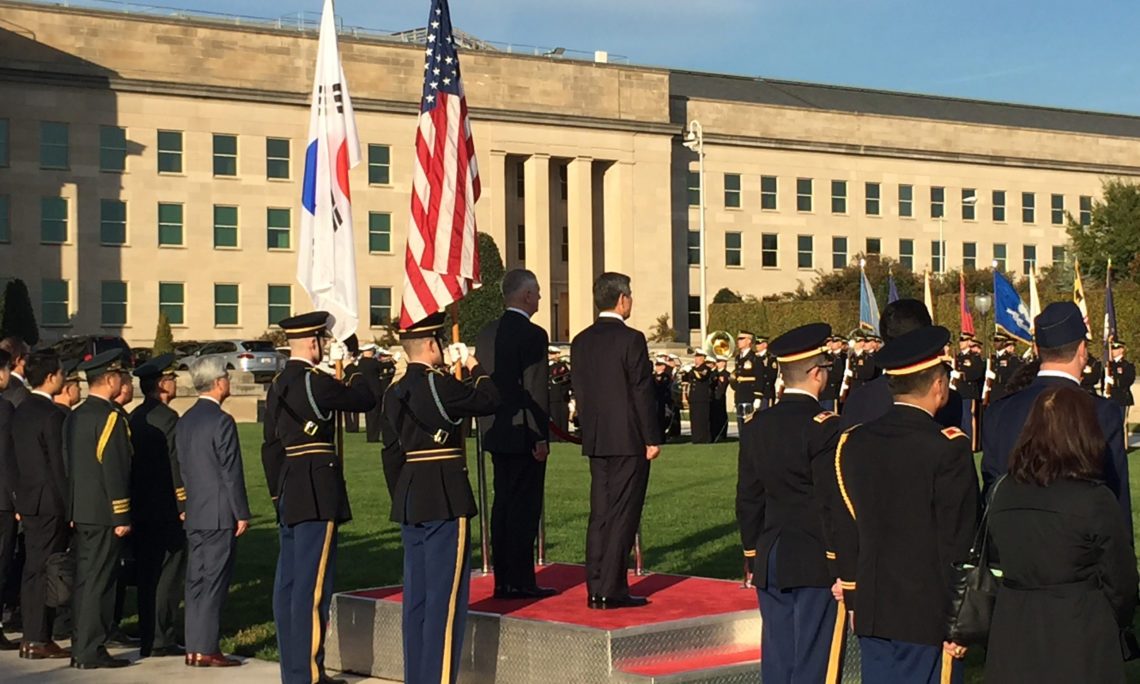 U.S. and South Korean defense leaders have made significant progress in preparation for transfer of wartime control over the combined forces to the South Korean military.

Through a translator, Jeong said the meeting is important because it comes at a time when the two nations begin an “audacious journey toward denuclearization of and establishment of permanent peace on the Korean Peninsula.”

He said both sides agreed to strengthen further the cooperation between defense establishments “to provide military support to the diplomatic efforts of our countries.”

Mattis said the meeting is a milestone in the U.S.-South Korea alliance. The meeting “bolsters an already strong partnership: one that is built on our foundation of common democratic values and the special type of trust shared only by those who fought and died alongside one another on the battlefield,” Mattis said. “Our predecessors would find us worthy in this demonstration of co-equal responsibility in the defense of liberty.”

The future command will continue to use the combined might of the U.S.-South Korea alliance to defend Korea’s sovereignty against any external aggression. South Korean officials are working closely with U.S. counterparts to ensure there are no missed steps when operational control passes.

The document also guarantees U.S. troops will continue to be stationed on the peninsula. This fulfills the ironclad commitments to the defense of South Korea established 65 years ago in the Mutual Defense Treaty, Mattis said.

The two sides also looked at details of the joint study of the future defense and vision of the U.S.-South Korea alliance. This study will continue over the next year and examine “the role our alliance will play following the final, fully verified denuclearization of the Korean Peninsula to strengthen the Indo-Pacific’s peace and prosperity and stability,” the secretary said.

Both men fully support the diplomat-led negotiations with North Korea to denuclearize the peninsula. “We look forward to seeing continued concrete progress as our diplomats work to resolve this more than half-century-long conflict,” Mattis said.

U.S. and South Korean service members fought alongside one another from the Chosin Reservoir in 1950, to the rice paddies of South Vietnam in 1968, to the desert and cities of Iraq in 2004. “Our troops have stood together for the safety and sovereignty of our nations, as well as the stability of our rules-based international order,” Mattis said. “Our nations’ bonds were forged in the tragedy of war and they endure as we strive to continue fortifying and deepening our ironclad alliance in support of the Korean people’s freedom and of peace.”