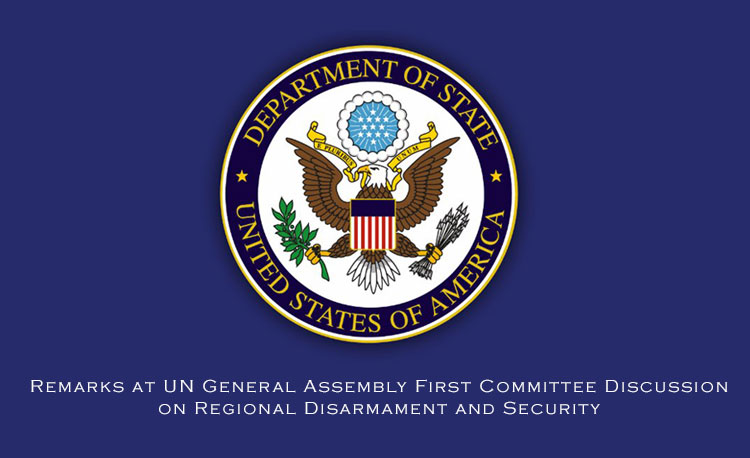 States base their decisions regarding deterrence and defense on their perceptions of the security environment. The U.S initiative on “Creating the Conditions for Nuclear Disarmament” – which we refer to as “CCND” for short – reflects that reality by recognizing that reducing regional tensions and conflicts will contribute to creating conditions conducive to progress on nuclear disarmament. Let me offer a few examples.

In East Asia progress has begun in changing the regional security environment, though more work remains to be done. Last year at this time, North Korea’s unlawful, undeclared and destabilizing missile launches and its sixth nuclear test in September 2017 were foremost in our mind and represented a grave threat to the international community. This year we are meeting in the context of engagement between the United States and North Korea aimed at holding North Korea to its commitment to complete denuclearization. The U.S. goal remains the final, fully-verified denuclearization of North Korea, and any premature relief in economic or diplomatic pressure would diminish the chances of achieving that goal. By fulfilling its obligations to eliminate its nuclear and ballistic missile programs under UN Security Council resolutions, the DPRK may finally realize the security and prosperity it seeks.

China continues to invest considerable resources in maintaining and modernizing its nuclear force. China is pursuing a new generation of nuclear delivery systems as it works to establish a nuclear triad including next generation missiles and a stealthy, long-range strategic bomber. These developments are matched with robust investments to upgrade China’s conventional military and support forces. Chinese military modernization remains centrally focused on degrading core U.S. operational and technological advantages in order to coerce U.S. allies and partners, and eventually establish hegemony across the region. China’s lack of transparency regarding the scope and scale of its modernization program risk destabilizing the region and, coupled with increasingly assertive actions regionally, threaten to undermine regional stability and poison the atmosphere for progress on nuclear disarmament.

Reducing nuclear danger in Asia – home to multiple states in possession of nuclear weapons – is critical to the safety and security of the region and the world. The United States urges all states with nuclear weapons to exercise restraint regarding nuclear and missile capabilities, and we encourage efforts to promote confidence building and discourage destabilizing actions.

The Middle East also remains a region where serious security challenges persist. The JCPOA did not put us on a path to addressing Iran’s malign conduct or put a nuclear weapons capability permanently out of reach. The theory that the JCPOA would positively contribute to regional and international peace and security has fallen flat. Indeed, the Iranian regime used the economic benefits it received under the JCPOA to fund its destabilizing activities in Syria, Yemen, Iraq, and elsewhere. President Trump made clear that the United States is ready to negotiate a new and better deal that comprehensively addresses our concerns, and fully reintegrates Iran politically and economically into the community of nations, provided Iran is willing to change its behavior and take lasting steps that demonstrate that its nuclear program will forever remain exclusively peaceful. In the meantime, Iran must abide by its safeguards obligations and fully cooperate with all IAEA requests for information and access. To truly lead to peace and security in the region, any deal also must address Iran’s missile development and proliferation, long-standing concerns about its compliance with the Chemical Weapons Convention, its support for terrorism, hostage taking, human rights abuses, and its destabilization of its neighbors.

Syria’s continuing violation of its international obligations poses a grave and destabilizing threat to the region and the world. Seven years after the IAEA Board of Governors first found Syria in noncompliance with its safeguards agreement for constructing an undeclared plutonium production reactor at Dair Alzour, Syria continues to refuse to cooperate with the IAEA’s investigation. Further, the Assad regime’s use of chemical weapons in clear violation of the CWC undermines the longstanding global norm against the use of chemical weapons. Security requires compliance with international agreements and obligations, and all states have an interest in Syria’s compliance with its NPT and CWC obligations.

The United States continues to support the goal of a Middle East zone free of weapons of mass destruction and delivery systems, alongside a comprehensive and durable regional peace. We remain convinced, however, that arrangements and modalities for negotiating such a zone should be mutually agreed among all the regional states and not imposed from the outside, consistent with international practice regarding such zones. This should be true at every stage, not just at the conclusion of negotiations. As such, we strongly reject efforts by the Arab Group to use this forum to dictate terms and modalities for pursuing such a zone through costly and politically-motivated proposals that do not enjoy consensus support in the region. Should the Arab Group decide to move forward with its unconstructive draft decision, we urge all states to join us in voting against it. The United States stands ready to support any regional proposals that have consensus support among all the regional states and are based in direct and inclusive dialogue.

The United States is also deeply concerned by Russia’s actions, which are aimed at undermining security in Europe and which make progress on disarmament less likely. Russia’s violation of its obligations under the INF Treaty, its destabilizing and illegal actions in Ukraine, its shameless defense of the Assad regime’s repeated use of chemical weapons, and its aggressive actions in outer space are long-standing concerns that remain unresolved. In the past year, Russia used chemical weapons in the United Kingdom and had the temerity to blame the United Kingdom and other European countries for that attack.

In conclusion, none of us should be under the illusion that the long-term goal of the peace and security of a world without nuclear weapons can be achieved without doing the hard work necessary to address these security challenges. Mr. Chairman, we encourage all states to join us in reinvigorating that work by engaging in a realistic dialogue about the world as it is and the steps we can take to reshape it into the world we would like it to be.